Mira Rajput Kapoor posted a video of her playing the piano like a pro and revealed how she has been practising it.

Shahid Kapoor and his wife, Mira Rajput Kapoor have made us believe in old-school love. It was in 2015, when the chocolate boy of B-town, Shahid lost his heart to the 21-year-old Delhi-based Mira. Even after being from completely different backgrounds and a 13-year age gap between them, Shahid and Mira are a perfect match.

Doting parents to Misha and Zain, Shahid and Mira have completed seven years of marital bliss, and glimpses of the same are often visible on their respective social media handles. To mark their seventh anniversary, Shahid had posted an adorable picture with Mira from one of their vacations and captioned it:

“7 down baby. Happy anni you made it through 7 hard long years. You a survivor. You a LEGEND.” Mira Rajput is not just a star wife, as she has created her own identity in the digital world as a wellness enthusiast. On September 30, 2022, Mira took to her IG handle and treated her fans with glimpses of her piano skills. Acing it like a pro, Mira revealed how she has been practising the same once her kids are asleep. She captioned her post as:

“Somewhere over the rainbow. Back to playing the piano and getting the hang of it. I learnt this off a YouTube tutorial but I realise I prefer reading music than watching it being played! Every evening once the kids are asleep and I’m done with the day, I’ve been practicing... I think I’ve found my spot.”

This is not the first time when Mira has treated her fans with her skills on the piano. In 2021, Mira had revealed her hidden talent by posting a video of herself playing a few tunes on a piano. Along with the video, she revealed how she gave up piano lessons but regrets it now. Her caption could be read as:

“Here’s something you didn’t know about me. I can play the piano! Well I’m out of practise, but I can read music, play my scales and play by ear. I can’t wait to get back to playing! I hated my lessons so much, probably because they were geared towards examinations but now I regret giving them up! Anytime I see a piano I can’t help but sit down and start playing. But it’s the same few pieces that I still remember. Now I think I should get back to it!”

The video was then panned toward her hubby, Shahid Kapoor, who was seen waiting patiently for her to finish. As soon as Shahid appeared, the text below the video read: 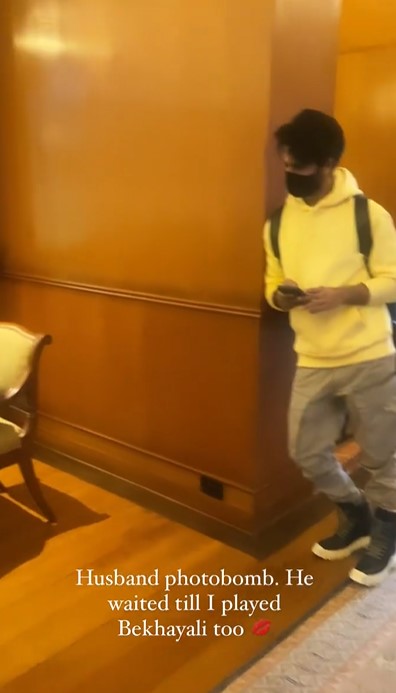 What do you think about Mira’s piano skills? Let us know.