Mira Rajput Kapoor indulged in a 'This or That' session on Instagram and a few of the choices given by her fans included Shahid Kapoor.

Features like 'Ask Me Anything', 'This or That' and 'Post A Picture Of' have bridged the gap between Instagrammers and their favourite celebrities. Celebs often interact with their followers through such features and Shahid Kapoor's wife, Mira Rajput Kapoor, is no different. Mira often connects with her fans through such sessions and she with no-filter, answers questions related to Shahid, their kids, Misha Kapoor and Zain Kapoor, her parents, Bela Rajput and Vikram Rajput, her parents-in-law, Pankaj Kapur, Neliima Azeem and Supriya Pathak, her sisters, Priya Wadhwani and Noor Tulshan and her BFFs.

For instance, it was Mira Rajput Kapoor’s one of the 'Ask Me Anything' sessions when she had revealed the first time, she had met Shahid Kapoor. No, it wasn’t when they had met for their arranged rishta set-up. Mira had revealed that she had met Shahid when she was 16 years old. When a fan had asked her, "What was it like meeting Shahid for the first time? Considering he is a star", Mira had replied, "Just like meeting anyone for the first time. Interesting. It was actually when I was 16 and we were at a common family friends house for a concert by a sufi singer. Both our dad’s love that kind of music." This time, Mira Rajput Kapoor indulged in a 'This or That' session and a few of the choices given by her fans included Shahid Kapoor. Mira was asked to choose between Shahid and their kids, Tommy Singh (Shahid's character in Udta Punjab) and Kabir Singh (Shahid's character in the film by the same name), Shahid as a husband and as a BFF, Shahid and AB de Villiers as her favourite celebrity, Shahid with and without beard, Shahid and her mother, Bela Rajput, a fit husband and a fat husband, Shahid and her BFF, Sejal, and Shahid and food. Her replies were crazy, fun and witty. After the session ended, Mira reposted a video on her IG stories as a 'miss you' post for Shahid and tagged him atop it. 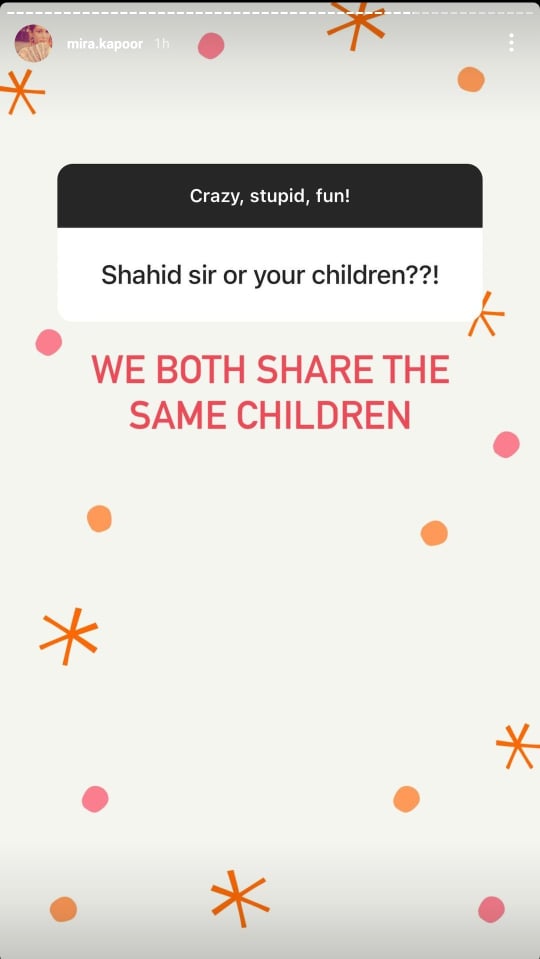 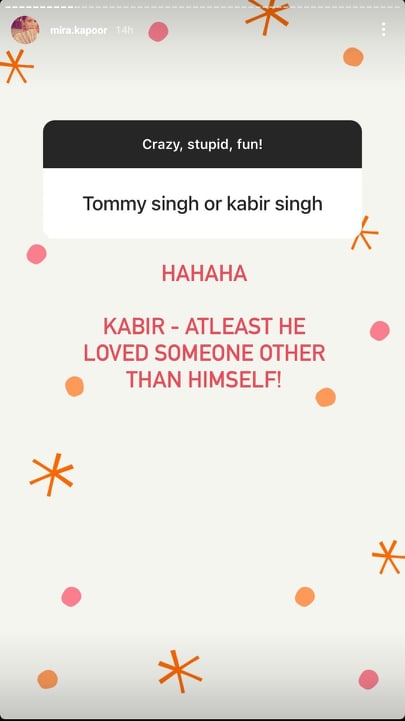 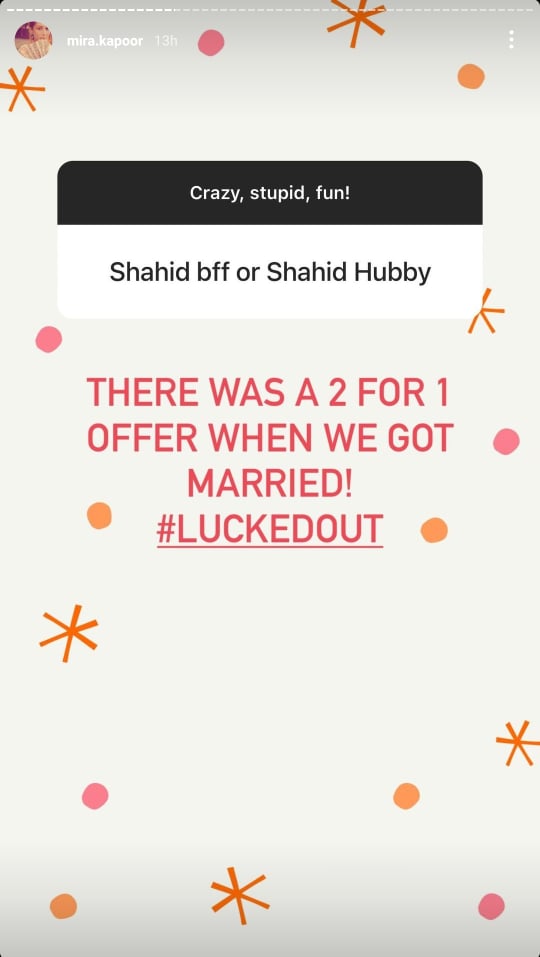 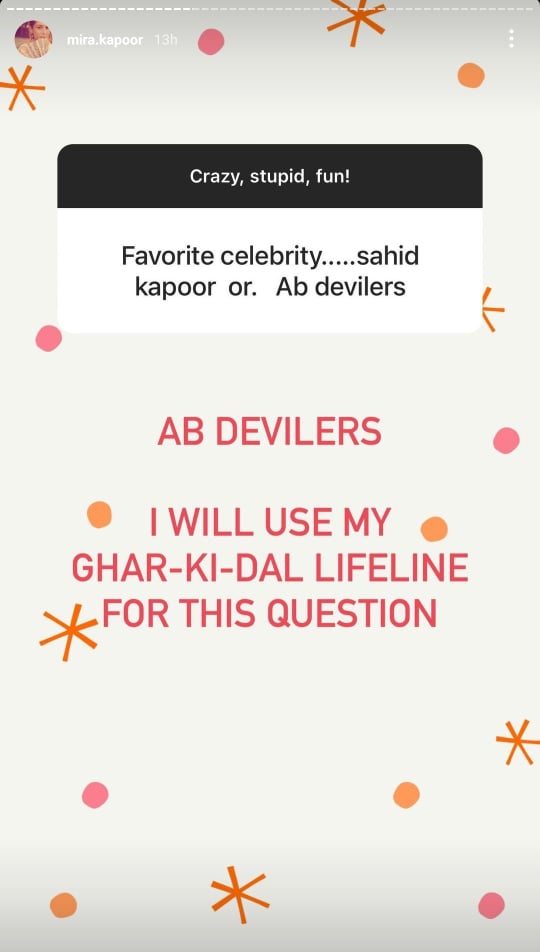 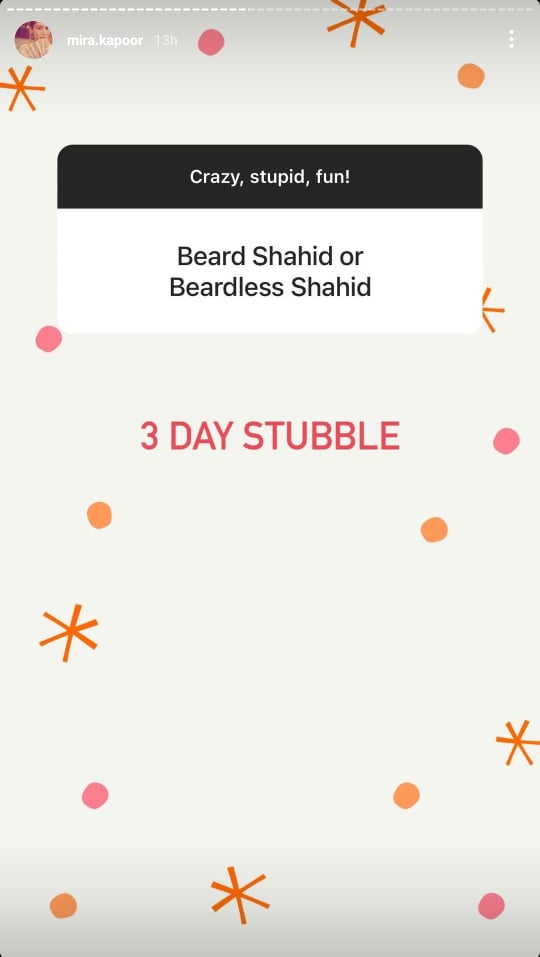 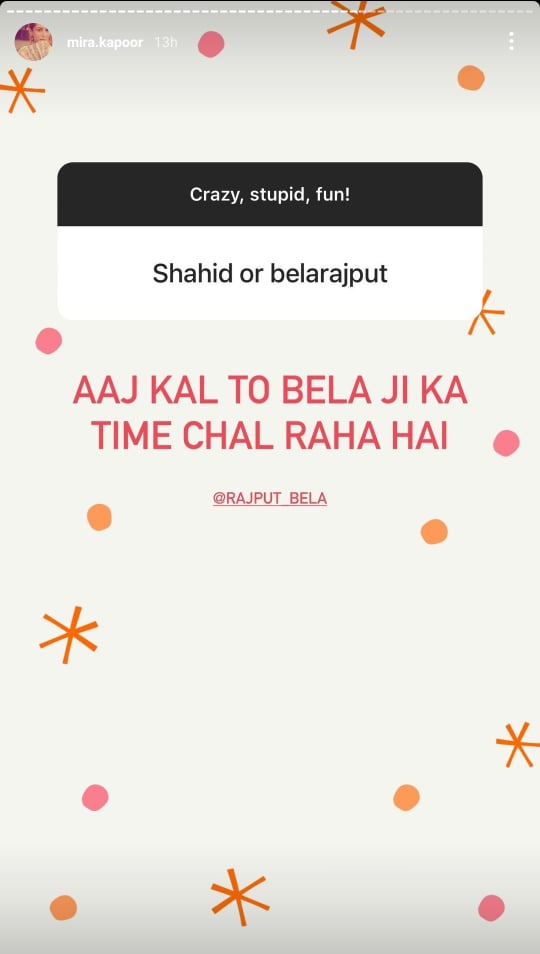 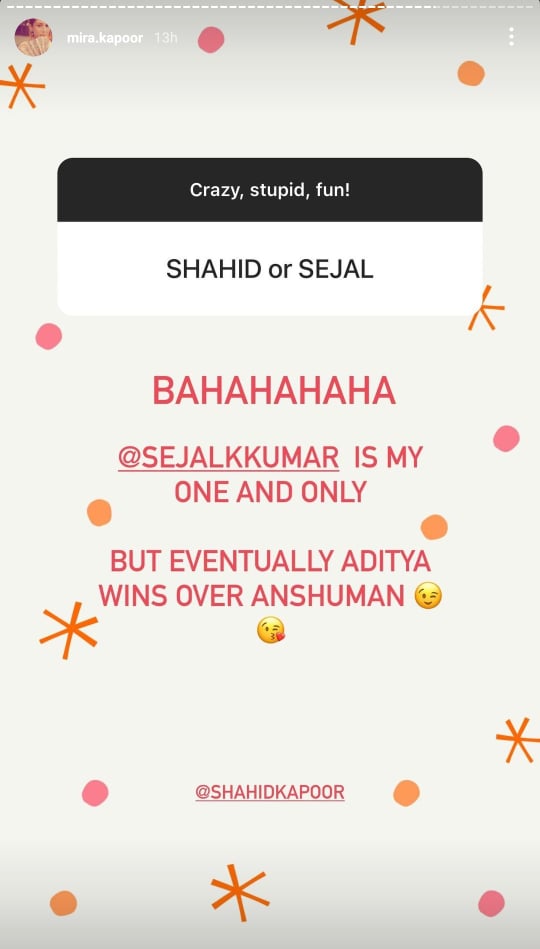 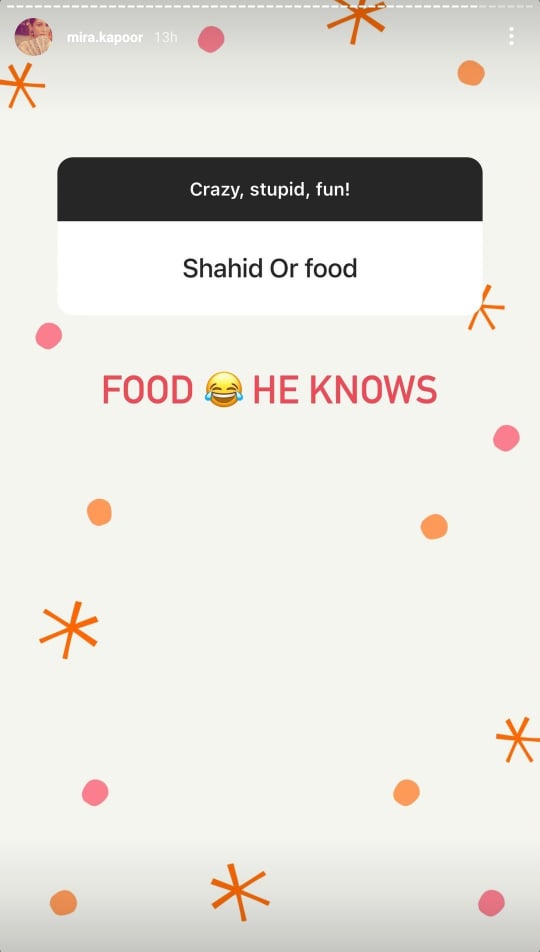 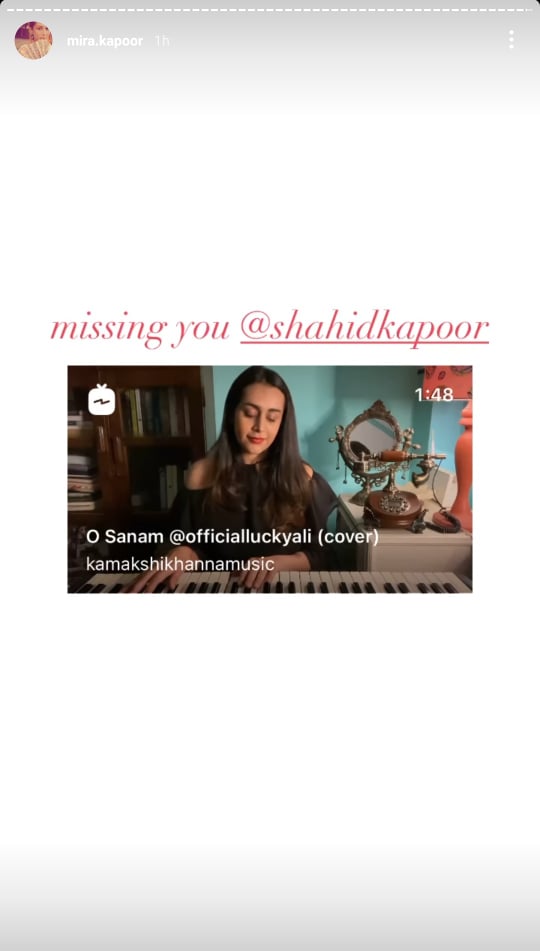 On August 29, 2020, Mira Rajput Kapoor had indulged in an ‘Ask Me Anything’ session, and had answered a lot of questions from her fans, related to her favourite food, jewellery, motherhood and her life as Mrs Kapoor. But what had caught our attention was when Mira was asked about her favourite Indian dish and her list had included one made by her father-in-law, Pankaj Kapur. When a fan had asked Mira, “What’s your favourite Indian food?” she had replied, “Dal Makhani, Paneer Makhani, Baigan Bharta, Soya Chaap, Gheeya/tori in any form, my mom’s kashiphal, Mom’s parantha, Gujrati Kadhi, Appam and Stew, Spicy Rasam, Poha, My FIL’s Orange Paneer. Anything really… I live to eat.”

Also Read: Mira Kapoor Posed With Her Bump Twin On Her Second Baby Shower, People Wonder If They Are Twins 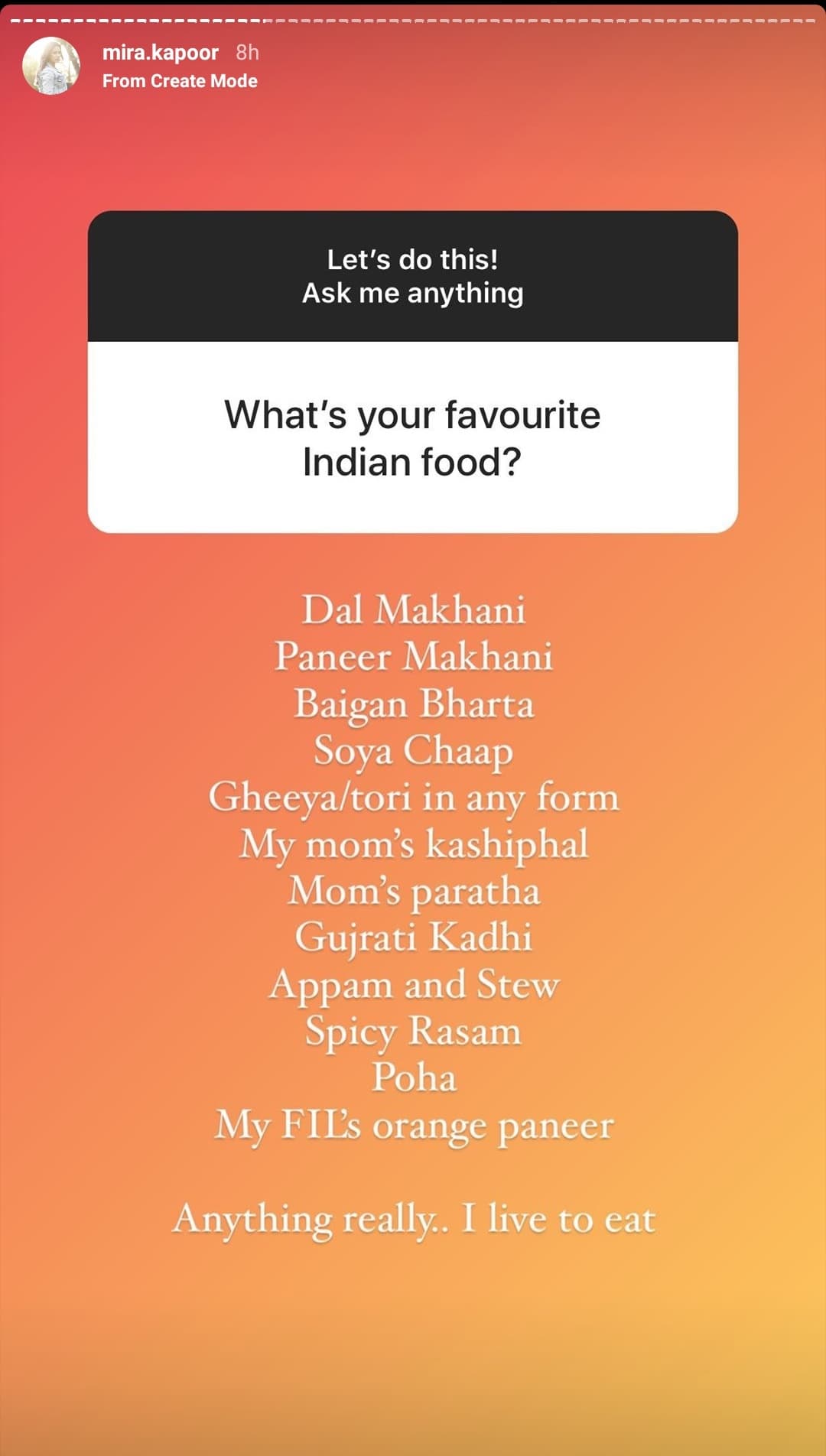 In one of the other ‘Ask Me Anything’ sessions, when Mira Rajput Kapoor was asked her views on having a third child, she had retorted, “Hum Do Humare Do”. Sometime back, Mira had answered her fans’ questions in an AMA session, from her go-to nail colour to her crush and favourite Netflix show. When Mira was asked about her crush, we expected her hubby, Shahid Kapoor’s name but to our surprise, the star-wife had revealed that she loves the South African cricketer, Abraham Benjamin de Villiers, who is also known as AB de Villiers. For her go-to nail colour, Mira flaunted her nails and had written, “Nude all the way” and added ‘Love’ sticker atop it. For her favourite Netflix show, Mira had said, “My favourite Netflix show is Schitt's Creek”. 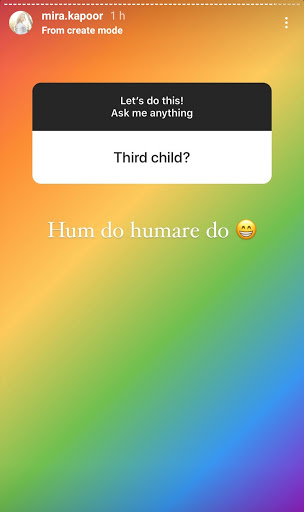 Just like Mira Rajput Kapoor, Shahid Kapoor also indulges in 'Ask Me Anything' sessions on Instagram and during one of those, last year amid the pandemic, he had revealed a lot about his personal life. On being asked about three habits that changed his life, Shahid had replied, “Being a vegetarian. Seeking spirituality. Always listen to my wife.” Answering what makes a soulmate, Shahid had retorted, “to be there when it matters.” During an interaction with his fans on Twitter, Shahid was asked by a fan, “Khana, bartan, kapde.. Ye sab kare ho kya lockdown me?” Revealing his lockdown duty, Shahid had replied, “Mera department bartan ka hai. Tumhara?”

Also Read: Mira Rajput Shares Glimpses Of Her Favourite Books That She Loves Reading To Misha And Zain We love ‘Ask Me Anything’ sessions of celebrities as they give us glimpses of their candid selves and their personal lives! 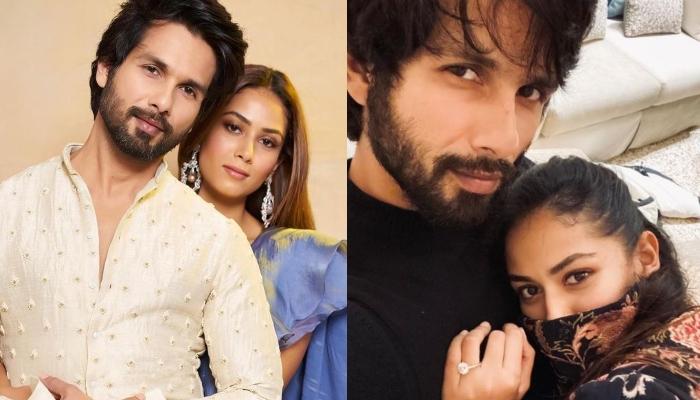 Shahid Kapoor's digital influencer and content creator wife, Mira Rajput Kapoor, with a fan following of 2.7 million, is an ardent social media user. Though Shahid and Mira love to keep their personal life away from the limelight, Mira hardly skips a day to post something on social media for