Born as Mahjabeen Bano, Meena Kumari was an Indian film actress and a poet under the pseudonym, Naaz. Often described as ‘the tragedy queen’, there could be no other actress like Meena Kumari who went through so much in a life that lasted only 38 years. 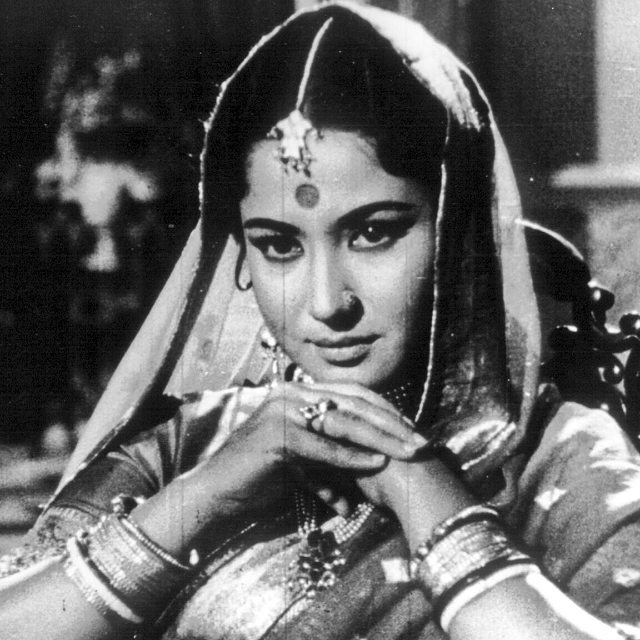 Meena Kumari was no less than an enigma. In her biographer, Vinod Mehta’s words:

“She had many dimensions – she read poetry, had literary friends, aspired to the higher life and was an alcoholic”.

But beyond her immense talent and superstardom owing to legendary films like Sahib Biwi Aur Ghulam, Parineeta, Foot Path, among many others, lie a Meena Kumari who had a tragic love story. So, let’s unravel the tragedy of ‘the tragedy queen’.

The tragedy of birth 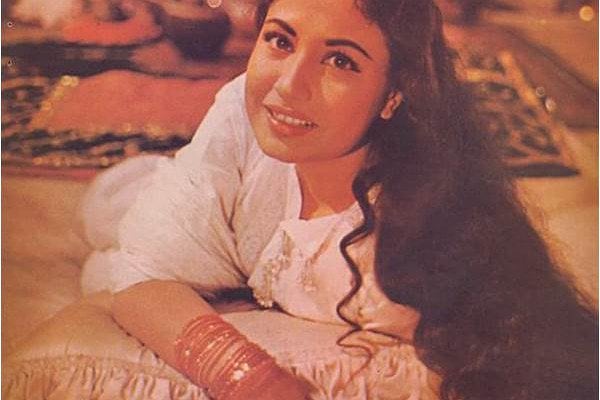 Do you know there is something called, ‘Meena Kumari complex’ and also, ‘Meena Kumari paradox’? Well, it all started with her birth itself. Shockingly, after she was born, her father didn’t have enough money to give to the doctor who had delivered Meena and you know what? Her father left her on the doorstep and went away! But a couple of hours later, he brought her home. As Vinod Mehta writes in Meena Kumari’s biography:

“I believe that moment remained in her subconscious mind. Here was a traumatised soul. She could not have been a happy person. Life had decided that she will suffer. She was fortunate that this unhappiness was appreciated in her roles. She understood this emotion so well”. It was Ashok Kumar, Kishore Kumar’s brother, who introduced Meena Kumari to the filmmaker, Kamal Amrohi. Later, Kamal offered Meena a role in one of his films. But before the project could go on floors, Meena Kumari suffered a terrible motor accident on May 21, 1951 and was hospitalised for long. She went through depression and Kamal would regularly visit her in the hospital. In fact, when they were not scheduled to meet each other, they would exchange letters. It must also be mentioned here that Kamal was already a married man and had three children from his marriage. Meena Kumari had to remain in the hospital for four months and all this while, Kamal was his guiding force and a happy detour from her depression. Soon after Meena was discharged, a spree of night-long calls started between the two. Kamal, who had signed Meena for Anarkali was about to get started but the producer suffered a major financial crisis and the film was shut down. In the middle of all this chaos, Meena Kumari (who was only 18 then) got married to Kamal Amrohi (34) on February 14, 1952, in a secret nikaah ceremony in presence of Meena’s sister, Mahliqa.

You May Like: The Unfinished Yet Timeless Love Story Of Dev Anand And Suraiya 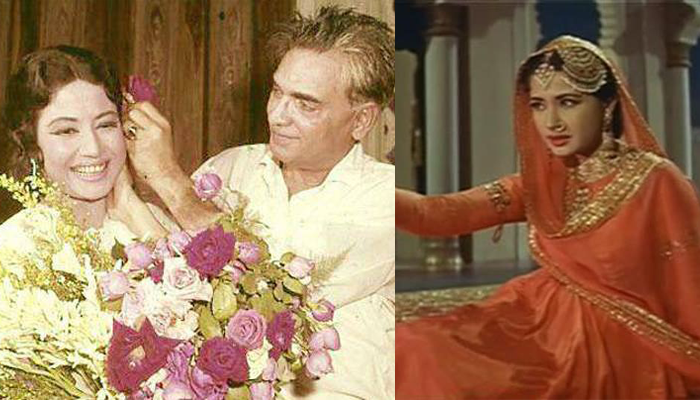 Ali Peter John, a journalist based out in Mumbai (Bombay then), had described in one of his writings:

“But Kamal Amrohi was never a good husband to her. She was also escorted everywhere she went by Baqar, Amrohi’s friend who kept a close tab on her”.

Meena Kumari, being an epitome of a Muslim girl who broke all the shackles of a predominantly patriarchal society to become an actress, had thought that marrying Kamal would redeem her from the subjugation of her father, but that didn’t happen. Kamal was so rigid that he would ask Meena to come home by 6:30 in the evening, nobody was allowed in her makeup room, she had to travel only in the car that Kamal had given her. In fact, allegedly there was domestic violence involved too. in Meena and Kamal’s married life. Recalling the news reports and his interaction with Kamal, Vinod Mehta wrote in the biography of Meena Kumari:

“When her star start rising, his went down. I asked Kamal Amrohi if indeed he had hit her as per many rumors. He completely denied it, saying that such a thing was totally against his upbringing. But six different people told me that there was physical violence in their relationship. Those were the days when Meena Kumari would come back Rembrandt till late at night”. 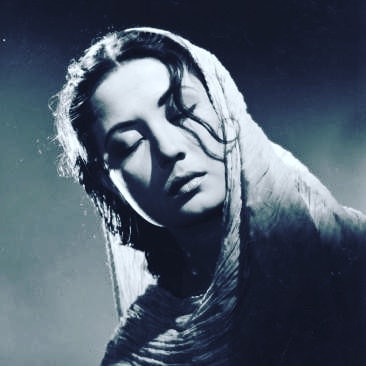 Too many rules, regulations and constant surveillance on her whereabouts made Meena Kumari depressed. And finally, in 1964, Meena Kumari divorced Kamal Amrohi. But the depression had already taken over her and a doctor had prescribed her a small dose of brandy to be taken once in a while to help her sleep better. But that medicine became an addiction and soon, Meena Kumari started drinking heavily.

By 1968, Meena’s health had deteriorated so much that she had to be sent off to the best of hospitals in London and Switzerland where she was diagnosed with liver cirrhosis. The doctors had advised not to work immediately after recovering now but soon after her comeback to India, Meena resumed acting in films.

Pakeezah and her tragic death Meena Kumari’s health was so fragile that doctors had told her that her next drink would kill her. Even though she left drinking for a while and recovered temporarily, her health was still a concern. And then came Kamal in her life again but not for any personal gratification but for professional gains. Pakeezah was Kamal’s dream project which had gotten delayed because of the couple's split-up. And then, this time, Kamal wrote to Meena:

“Only Pakeezah completion remain unsettled. You have made a condition that unless I give you a divorce you will not complete Pakeezah. Even this knot can be untied … I will free you from your marital ties. After this if you wish to complete your Pakeezah. I would be the most happy to do so. This is my request, that Pakeezah on which the fortune of many people depends, and which had the good wishes of so many people should not be left uncompleted if possible. You have better means. You have box-office appeal, and most of all Pakeezah needs you personally … Pakeezah that is like a sinking ship will reach a shore under your care”.

To this, Meena replied:

“In regard to my working in Pakeezah, I have always been willing and clamoring to work. Pakeezah is my life dream and it will be my greatest pleasure to see it completed. As for my remuneration, I am glad you have given me an opportunity to prove my regards and respect for you. I shall accept only ONE GUINEA as a token of goodwill for my entire work in Pakeezah”.

And hence, Pakeezah was completed and the immense success of the film even brought the two closer. But a month later, Meena was hospitalised at St. Elizabeth's Nursing Home. After two days of being in the coma, she breathed her last on March 31, 1972, at the young age of 38.

Meanwhile, an alleged link-up with Dharmendra After separation from her husband, Kamal, Meena was allegedly linked-up with many leading figures of the Hindi film industry- Dharmendra being the most famous. Even till today, Dharmendra never fails to acknowledge that whatever he is today, is all because of Meena Kumari. When Dharmendra was just starting his career, Meena was already a recognisable face. Rumour has it that after her split with Kamal, Meena became close to Dharmendra. About this alleged link-up, Vinod wrote:

“The popular view is that Meena and Dharam were intimate for three years. The inside view is that the intimacy lasted no more than six months”.

Once, Dharmendra was at a premiere of a movie in Delhi and at the party, he drank heavily. On his way back to Mumbai, the airport authorities didn’t let him in at the airport and he shouted at them:

“But I must get back to Bombay. I must. Meena is waiting for me”.

This incident and statement were all over the news the next day. In fact, once, Meena had gone to a picnic with her convoy of friends and Dharmendra also happened to be there. But when they had to board their cars for their return journey, he mistakenly sat in another car and that made Meena too hysterical. She panicked and wanted to know where Dharam went. Cross-legged inside her car, she kept shouting:

Next Read: The Eternal Love Story Of Legendary Actors Sunil Dutt And Nargis

So, here we are guys! This was the tragic love story of India’s ‘tragedy queen’, Meena Kumari. What a life, right? From being discarded by her father after her birth to her death due to excessive drinking, from a superstardom at such a young age to an abusive husband, Meena Kumari really led her life like a pro, without any regrets!