Mansi Sharma took to her Instagram handle to share the first glimpse of her new-born with her fans, along with a heartfelt note. Check out the picture inside!

When Mansi Sharma and Yuvraaj Hans had announced the arrival of their baby boy, the news had broken the internet, as swarms of congratulatory messages, and good wishes had flooded their social media handles. Their fans were eager for a glance of their little wonder, and it seems, Mansi Sharma gave in to their demands, as she shared the very first picture of her baby boy on her social media handle, as a treat to her fans! (Recommended Read: Irrfan Khan's Wife, Sutapa Sikdar Hopes To Reunite With Him On His One-Month Death Anniversary)

There is no greater joy in the world than to hold your new-born for the first time, as your whole world fills with abundant happiness, enough to last for a lifetime! Television actress, Mansi Sharma is undergoing the same emotions as, her world took a 180-degree pleasant change on May 12, 2020, with the arrival of her little munchkin. Scroll down to look at the first-ever picture, Mansi Sharma has shared of her new-born! Mansi Sharma took to her Instagram handle on May 29, 2020, and shared the first picture of her new-born with a heartfelt note alongside it, which can be read as "12th MAY 2020 has Changed my life completely... Yess!! Becoz I became MOMMY HREDAAN YUVRAAJ HANS came into my life... I still remember whn my mom used to say “JIDO TU MAA BANENGI ODO PATA CHALEGA” with this beautiful phase I realised one more thing that parents do every possible thing to make us happy .. Sleepless nights jus to see baby is not crying ... Change his nappy so that he shouldn’t be uncomfortable ... when I hold him in my arms that SUKOON is completely different... Wanna write so many things but aaj ke liye itna he .. Thank u thank u Thank u Rabb ji for everything #blessed #baby boy #touchwood #newmommy #family #Thank u Rabb ji for everything." Take a look at the picture below: 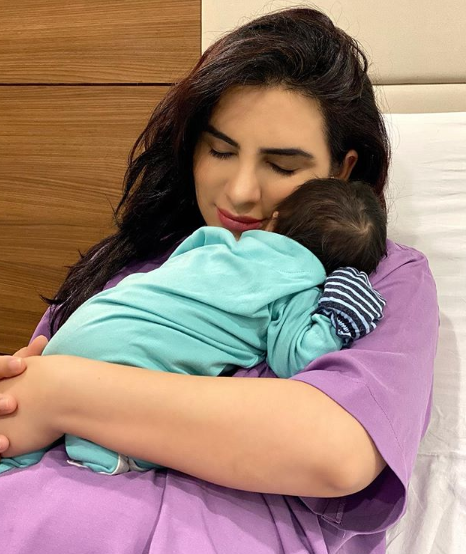 The doting father, Yuvraj Hans had pronounced the name of his little angel on his Instagram handle on May 15, 2020. He had shared a video wherein, his father and legendary singer, Hansraj Hans had sung a Lori for his newborn grandchild. Along with the video, Yuvraaj had written a caption describing his emotions, which could be read as "Tera Naam Rakheya “Hredaan” Ve Tu Te Mummy Daddy Di Jaan Ve..... Emotional Lori From Hredaan’s Daadu. Who Is Not Able To Meet Him Due To Lockdown. But Sending His Love Through A Voice Note On My Whatsapp.....Thank You Soo Much Dad. Hope To See U You Soon I Got Soo Emotional After Hearing It #grandad #love." The actor had also shared a screenshot of his conversation with his father, explaining to him the reason behind choosing the name Hredaan for his grandchild. Take a look at the video here: 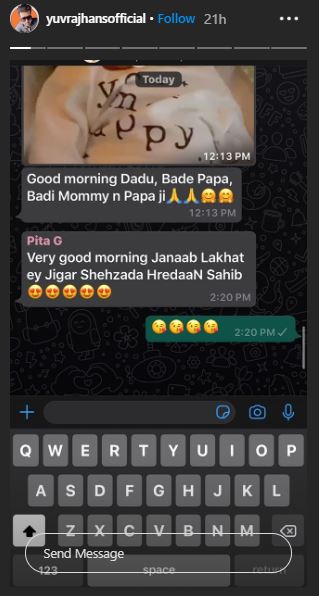 The elated mommy, Mansi Sharma had shared the news of her pregnancy in the cutest way possible. She had taken to her Instagram handle to share a picture with her husband, Yuvraj from her Godh Bharai ceremony. In the picture, Mansi could be seen lovingly hugging her husband and had flaunted her beautiful pregnancy glow while she had donned a gorgeous pink suit. Along with it, Mansi had written, "Baby Shower #Thank u Rabb ji for everything #8 months #touchwood #to be mom n dad #blessed." (Also Read: Shikha Singh Is Amazed By The Experience Of Pregnancy, Reveals What She Plans To Call Her Baby) 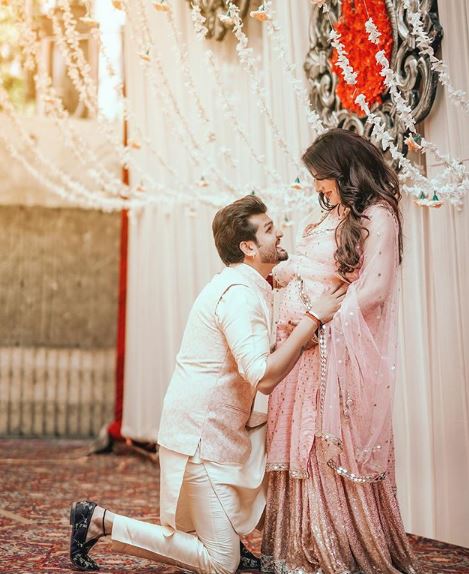 Mansi, who had quit the show, Chhoti Sarrdaarni, had revealed the reason for doing the same in an interview with IWMbuzz. She had said, "I could not handle the day and night schedules happening in the show as my health did not help me out. I had given my notice in August. Having said this, I even had plans for continuing. But my health took a toll and since we are planning for a baby, my doctor advised me to rest my body as much as possible. There was a lot of travelling involved which was again a strain on the body. Ultimately I had to talk it out to my Producers and channel." (You May Also Like: Neena Gupta And Masaba Gupta's Hilarious Social Media Banter Is Every Mother-Daughter Ever) We're already gushing over Mansi Sharma's cute little munchkin! What about you?