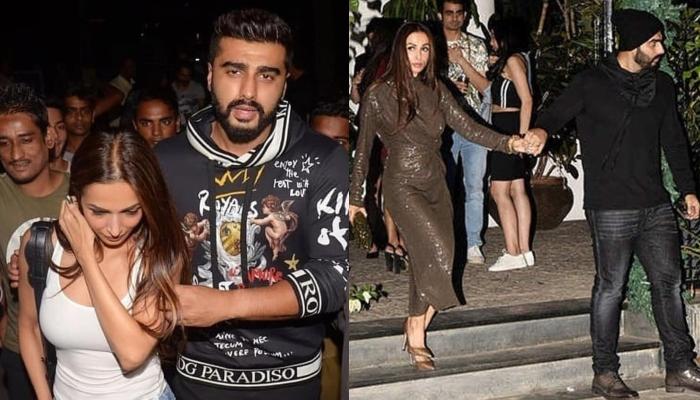 There is nothing more beautiful than being in love! The thought of having someone to wake up to, and to talk to at the end of the day, keeps you sane. And, while the entire B-town is either getting married or falling in love, there is another couple who is dropping hints of their romance for us to decode. Well, yes we are talking about Arjun Kapoor and Malaika Arora. Although, the two have never admitted to being together, but their public outings and social media PDA tells a rather different tale. (Recommend Read: Taimur Ali Khan Roars To The World That His Dad Is A King, And We Agree With Our Little Simmba)

Arjun and Malaika have been making headlines with their every little move, and we wonder when they will let the cat out of the bag. For instance, earlier today, on January 7, 2019, Malaika treated her fans with a throwback photo from her last vacation at an undisclosed location (later revealed). She captioned it as, “Take me back .....happiness #throwbackthursday”, followed by heart emoticons. And guess what, who was the first celebrity to comment on it? Yes, you are absolutely right; it was none other than Arjun, whom Malaika is reportedly dating. Arjun instantly reacted to the post with, “Hmm”. Check it out here:

Wait, the story didn’t end there! Following Malaika’s suit, Arjun, too, shared a throwback post of his vacation in Milan. And, he definitely looked dapper in it. However, coming back to his show-stealer post, the actor captioned it as, “U Gotta pose on ur holiday to make sure u got enough Instagram ready pictures when ur back !!!  #milan #letsgoback #throwbackthursday #poserforlife.” Take a look of the post here: (Also Read: Taimur Ali Khan Gets Amazed To See Angad Bedi Riding The Toy Train With Other Kids, Video Inside)

With the help of pictures, Malaika was telling Arjun to take her back to Milan, where they went for a holiday together. Arjun kind of accepted her requested and mentioned it in his holiday picture that 'Let's Go Back'. Isn't it too sweet? Arjun and Malaika’s dating rumour started making rounds when they first attended the Lakme Fashion Week 2018 together. The media mills were sure that they will soon make it official but it never happened. From holding hands on the sets to taking a mini birthday trip, the two kept playing hide and seek with the media and fans.

In an earlier interview, Malaika had refuted any such rumour and said, “Arjun is a very good friend of mine. But people give a very different meaning to it, which isn't true.” The Namaste England actor had shared once that his only serious relationship was with Salman Khan’s sister Arpita Khan. In an interview with Times of India, he talked about his emotions when he revealed about his relationship with his sister, he said “I was scared of Salman bhai and went and told him and the entire family as I wanted them to know from me first. They were very kind about it. He was taken aback, but he respects people and relationships. In fact, he was partial in that relationship where he would always take my side.” (You May Also Like: Ankita Lokhande Comments About Ex-BF, Sushant Singh Rajput After Confirming Love For Vicky Jain)

For those who don’t know, Malaika was earlier married to Arbaaz Khan, but this once-madly-in-love couple parted their ways after 18 years of marital bliss. Arbaaz has moved on in his life and is dating an Italian model, Giorgia Andriani. Malaika, on the other hand, has finally moved on as she recently removed the “Khan” surname from her name. Malaika Arora Khan is now Malaika Arora on her social media handles, clearly claiming her single status.

Meanwhile, on Neha Dhupia’s radio chat show, No Filter Neha Season 3, when Anil Kapoor was asked about his nephew, Arjun Kapoor’s budding relationship with Malaika Arora, he had stated, “I know him very well. Whatever makes him happy, makes me happy. I don’t want to comment on anything as that’s personal... whatever he does. We all family members have believed that whatever makes the other person happy makes us happy.” (Don't Miss: Nakuul Mehta's Wife Jankee Parekh Mehta Shares How Proud She Is Of Him In A Heartfelt Birthday Wish)

Well, we wonder if Arjun Kapoor and Malaika are going to plan another trip anytime soon! What do you think?