Your mental health is important. A lot of people will come out and talk about mental health now as we lost the gem actor, Sushant Singh Rajput due to demise by suicide, but how many of us are actually going to follow up is still unsure! The entire nation is heartbroken with the news of Sushant’s demise because nobody actually saw it coming. People judged him on the basis of his money and fame, but there was a lot more to him that we all failed to look upon. (Also Read: Shweta Tiwari Gives A Befitting Reply To Estranged Husband, Abhinav Kohli For Harassing Her Daughter)

On June 14, 2020, the nation lost its one of the most humble, sincere, and talented young actors as he had lost the battle to his mental illness. From being a gentleman to his charming smile to his philosophical ideas, we as a nation failed to understand his inner turmoil. While some are linking his death with the suicide of his ex-manager, Disha Salian, some are highlighting the dark side of Bollywood, while the reports say that the late actor was suffering from depression for past 6 months and was taking anti-depressants.

Sushant had started his journey towards being a Bollywood actor with TV shows. He had risen to fame with his portrayal of Manav in the popular show, Pavitra Rishta and had made many friends from the show. One of them is his co-star, Mahesh Shetty, whom he had last called before taking this drastic step. According to a report in India TV News, Mahesh, whom Sushant used to consider as his brother, in the police statement has stated that Sushant had stopped taking his anti-depressants pills from the past few days. The late actor had informed him that he is fine now and doesn’t need the pills. 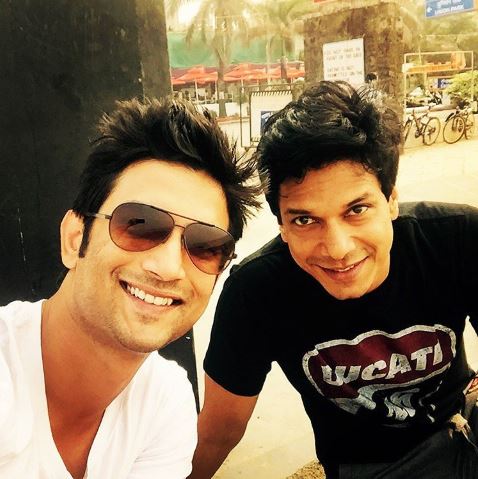 According to the reports, Mahesh Shetty had further revealed that during their last conversation, Sushant was low on energy, but he wasn’t suffering from any kind of financial crisis. Well, we all are shocked with the news of Sushant’s demise by suicide. On June 15, 2020, Mahesh Shetty's PR team also posted a picture on his Instagram handle to request media people some privacy as Mahesh has lost his brother and dear friend, Sushant and needs his time to come in terms with the reality. Take a look at his post below: 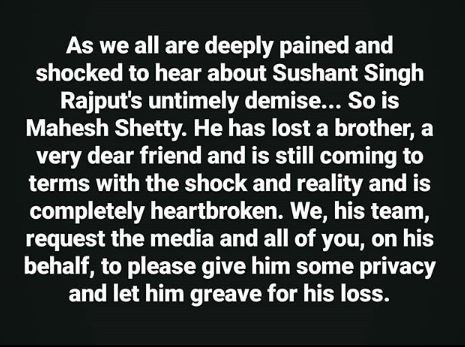 Sushant’s other co-star from the show, Pavitra Rishta, Parag Tyagi in an interview with ETimes, had revealed how the entire cast of the show including Ankita Lokhande are devastated with the news. Parag had said, "Aai (Usha Nadkarni) can't stop crying. Manju Shah (Swati Anand), everyone is shattered after hearing the news. All Pavitra Rishta actors were discussing and everyone is asking why? I spoke to Ankita (Lokhande). She is also devastated and everyone is speechless as to how this happened. She was devastated and is unable to believe the news. Everything was good, Chichore was a hit, his new film was coming Bechara, which looked good, why Sushant why. I was watching the teasers of Bechara yesterday. He was so good." (Recommended Read: Shakti Mohan Wants To Be Like Her Strong Mom, Shares A Heartwarming Note For Her 'Pyaari Mumma') 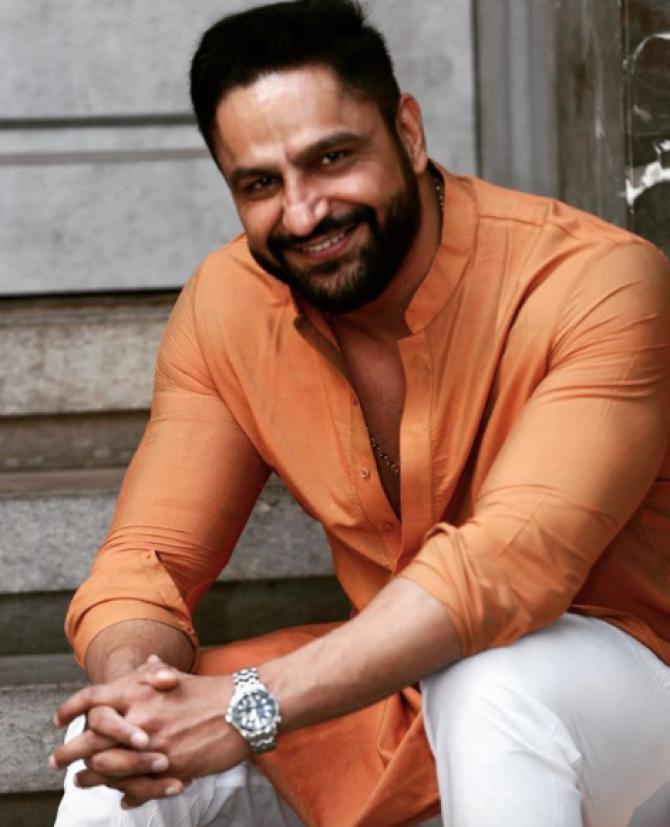 As Sushant’s last rites are to be performed today, his sister, Shweta Singh Kirti had taken to her Facebook account on June 14, 2020, and had posted a status in which she had asked for help as she was unable to get tickets to India because of the ongoing COVID-19 pandemic. Her status could be read as “I need to fly to India ASAP… not being able to get any flight tickets… if anyone can help… please let me know.” However, Shweta had later confirmed after some hours that she had arranged a ticket for herself and will fly and reach on June 16 from the US. But the doting sister is worried about the 7-days quarantine period and had asked for some help regarding that in her another status which could be read as “By everyone’s help… tickets to India are confirmed. I am flying on 16th, will reach Mumbai via Delhi. Worried about the 7 Day quarantine period… is there a way it can be waived off? I need to get to my family soon.” Take a look. (Recommended Read: Sushant Singh Rajput Felt 'Indebted' To His Ex-Girlfriend Ankita Lokhande, Reveals Stylist Leepakshi) We are still in shock! RIP Sushant Singh Rajput!