In a country where the game of cricket is considered a religion, one of the best Indian cricket captains so far, MS Dhoni holds the status of a living God! The exceptionally calm and composed MS has millions of fans. It would not be an understatement to say that MS has a whole clan of 'devotees', who call themselves MSDians. MSD or as lovingly called by his fans 'Mahi' had become a father to an adorable little girl, five years back  (2015) when the Indian Cricket team was playing ODI World Cup in Australia.

(Recommended Read: Kajol Devgan And Nysa Devgan Share An Uncanny Resemblance With Each Other, Here Are The Proofs)

His refusal to return home when his wife was giving birth because his team needed him, had depicted his dedication towards cricket. In his words, "National duties come first!" But now, since he has become a father, MSD spends a lot of time with his sweet little munchkin Ziva, who is very popular just like her daddy. Mahi shares a lot of videos spending quality time with his daughter. Here is a collection of some, which we can't stop drooling over!

#1. When Ziva Decided To Give A Shoulder Massage To Daddy

Mahi's adorable munchkin Ziva's fondness for her father often reflects on his social media feed. Fathers and daughters tend to have a very affectionate relationship especially when it comes to caring. Ziva had turned our baby-fever soaring high with this video where she could be seen massaging her dad's tired shoulders with her small hands. Her immensely cute and caring gesture for her father had made our hearts explode with love!

(Also Read: Unseen Picture Of Taimur Ali Khan Resting In His Crib Is A Priceless 'Hidden' Gem Posted By Kareena)

#2. When Ziva Made A Snow Castle Along With Daddy

Some time ago, Mahi had visited Dehradun with his baby doll, Ziva and his gorgeous wife, Sakshi and had posted an adorable video of him playing in the snow with little Ziva. The doting father could be seen intently engaged in making a snowman along with Ziva with the same concentration as he shows on the field. The video is so beautiful with snow falling and an amazing view of the mountains. At one point, Mahi had started bombarding Ziva and Sakshi with snowballs and it is too cute to be missed! See for yourself: 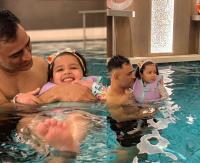 A daughter's fondest memories of her childhood include her first life lessons by her father. Be it her first walking lessons, first cycling lessons, first 'stay-away-from-the-guys' lessons (fathers tend to do that often!) or her first swimming lessons. The little princess that she is to her father, Ziva could be seen enjoying swimming lessons with Mahi and chachu Hardik Pandya. The adorable father-daughter duo seemed to be quite engrossed in enjoying each other's company.

#4. When Ziva Helped Mahi In Cleaning His Jeep

Former Indian cricket captain and the heartthrob of millions of cricket fans all over the world, MS Dhoni is known to be someone, who has an emotional attachment to his bikes and cars. His collection of the same and his willingness to clean them on his own despite having an army of servants at his beck-and-call speaks of his love for them. Seems like, his daughter is not behind in following his footsteps. In a delightful post that Dhoni had shared on his Instagram, Ziva could be seen helping her daddy clean his jeep. Mahi had even written a heartfelt caption for his little munchkin, "A little help always goes a long way especially when you realise it's a big vehicle."

#5. When Ziva Requested People To Vote Just Like Daddy And Mommy

When you're as popular as the mighty Thala, there comes certain responsibilities as well on your shoulders as you're an icon to millions of people out there. The status that the most successful captain of Indian Cricket team holds in India, he tends to influence a lot of people time and again. His sweet gesture had won hearts over the internet, when his little princess had urged people to go and vote just like her mommy and daddy. In the adorable video he had posted on his Instagram, his little munchkin Ziva could be seen sitting in his lap and urging people to vote. We're sure the vote percentage would've hiked after watching this video!

(You May Also Like: Aishwarya Rai Bachchan And Aaradhya Bachchan's Mother-Daughter Moments Are Nothing But Pure Love )

#6. When Mahi Asked, "How Are You?" To Ziva In Ten Different Languages

As much privileged kid Ziva might be, to be born to the miracle of Indian cricket, MS Dhoni, he makes sure that she is raised as a normal child, not being blinded by the popularity of her father. Mahi had posted a video on his Instagram handle wherein he could be seen talking to Ziva in different languages, teaching her greetings in languages spoken in India. Ziva had looked so cute rehearsing different types of greetings in her squeaky little voice with her father. The iconic father-daughter duo, Mahi and Ziva are so much fun, that every time we see them together it just melts our heart!

#7. When Mahi Made Sandcastle On The Beach With Ziva

It's nothing but an utter bliss to the sight watching a father-daughter play. The mighty Thala, however exceptionally calm he might be on the field, tends to become a kid while playing with his daughter,  Ziva. In an adorably sweet video Dhoni had posted on his Instagram, he could be seen playing with Ziva on the beach, whereas mommy, Sakshi was making the video. Mahi seemed to relive his childhood playing with his daughter as he had written, "As a kid whenever we got sand, this is one thing we would do for sure!"

(Recommended Read: 6 Celeb Stepfathers Who Share A Beautiful And Cordial Relationship With Their Stepchildren)

#8. When Ziva and Daddy Danced Together

There's a little kid in all of us which comes out when it gets the right company. Agreed? The little kid inside Mahi had come out when Ziva had decided it was time for daddy to dance with her. Mahi had posted this video on Instagram wherein he could be seen dancing along with Ziva, following her steps carefully with the caption, "Even better when we are dancing together!" Seems the learned became learner for once!

#9. When Ziva Made Her Daddy Eat His Veggies

The doting little princess of Mahi makes sure that her daddy eats his veggies on time. And for that, she herself overlooks and if needed, she feeds him with her little hands. In the video below, Ziva could be seen feeding daddy a carrot, and Mahi is obliging like a good boy. It seems our Mahi is in little, but safe hands!

(Also Read: 'Massis' And 'Buas' Of Bollywood And TV Who Share A Beautiful Bond With Their Niece And Nephew)

We all know Dhoni hails from Ranchi was a part of Bihar long ago. So, Mahi had taken the liberty to teach his little princess some Bihari. We found a video of little Ziva talking to her daddy in Bihari, and our hearts just exploded with love! Ziva could be seen asking her daddy, "Kayisan ba?", when he was all tucked to go to sleep. To which, Dhoni had replied, "Thike ba"! Check out the video below:

He might be a fiercely combative cricketer on the ground, but he is always a loving, caring father first at the home. Mahi was seen blow-drying his cute little munchkin, Ziva's hair in this adorable video and it took our heart away at once. He had even put a sweet caption which had said, "Game over, had a nice sleep now back to daddy's duties!"

#12. When Ziva Was Asked If Papa Is Good Or Bad And She Gave A Diplomatic Answer

This is a very cute one! Little Ziva could be seen in her school uniform directing her daddy where the balloons are, when her mumma, Sakshi, who was filming the video asked, "Ziva, papa is good or bad?" To which, Ziva had said, "All of you are good." Sakshi had again asked her, "I thought you were angry with papa." Ziva had coyly replied, "I am not angry" and in return, had gotten bombarded with balloons by her daddy. Check it out below:

#13. When Ziva And Daddy Had Attacked On 'Besan Ka Laddoo'

Complying to the popular belief, 'save best for the last' we have saved the cutest one for the last. In this video, Mahi and Ziva could be seen attacking one besan ka laddoo, wherein Mahi teases his little doll as if he'll eat the whole and she won't get any, to which she throws a little tantrum! Take a look at it below:

(Suggested Read: 17 Yummy Mummies of Bollywood And Their Adorable Kids Who Make For a Picture-Perfect Pair)

It would not be an understatement to say that Mahi and Ziva are one of the most favourite father-daughter duo, who rule social media like a boss. FYI,  five-year-old, Ziva already have more than a million followers on her Instagram handle!

After Sachin Tendulkar, if there's any cricketer, who has left an impact on his fans and is treated like a God, then it has to be MS Dhoni. His cool demure, composed stance and presence of mind had changed Indian cricket’s outlook internationally. ‘MSDians’ worship him like a God and