The most controversial 'jodi' of television, Vishal and Madhurima are again in the limelight for all the wrong reasons. Now, Madhurima’s mom, Vijaya bashed Vishal for speaking ill about her daughter. The dance reality show, Nach Baliye 9 had announced its winner early this month but still, controversies pertaining to one of the jodis is still grabbing the attention of the gossipmongers. We are talking about one of the most popular ex-jodi (when we say popular, we mean all the controversies that they had gathered), Madhurima Tuli and Vishal Aditya Singh. More than their breathtaking dance performances, they are still remembered for their off-stage drama and bad-mouth statements for each other. Even the judges of the show had tried to make things cordial between the duo but failed as Madhurima and Vishal didn’t want the things to be normal between them. (Recommended Read: Arpita Khan Sharma Wishes Aayush Sharma On 5th Wedding Anniversary With An Array Of Throwback Pics)

Even after Nach Baliye 9, Vishal Aditya Singh didn’t leave any chance to blame his ex, Madhurima Tuli for all the bad things in their relationship. Vishal had entered, Bigg Boss 13 house and before entering the house, in an interview with The Times of India, he had revealed details about his split with Madhurima. Vishal had revealed that besides finding him desi and not fluent in English, she had felt that he wasn’t financially strong. Vishal had also talked about their fights and said that she would fight with him every time before they used to go out for events and parties. Vishal had recalled once asking Madhurima that whether she was ashamed to be seen with him in public, and she had agreed. Vishal had concluded by saying that his ex, Madhurima was also abusive.

Though Madhurima Tuli has remained silent about Vishal Aditya Singh’s allegations, it didn’t go well with her mother, Vijaya Pant Tuli. In an interview with SpotboyE, Vijaya bashes Vishal and stated that he is using her daughter’s name for popularity. She said, “Madhurima didn't speak a word against the interview and full marks to her. What was the need of giving that interview just days before he entered Bigg Boss or maybe just on that day? Isn't it clear that he is seeking publicity for his participation in Bigg Boss 13?”

Vijaya Pant Tuli further revealed that she is hurt with Vishal’s act and added, “I am really hurt. Hadn't he already done enough demonstration of their bad vibes on the Nach Baliye 9 stage? Lovers fight and lash out at each other but how would anyone know if Madhurima told him those things or not, unless she herself talks? But think of it, is it wrong for any girl to expect his partner to be self-sufficient and cultured? Vishal also spoke very badly about me when I had visited the Nach Baliye 9 sets, once. Despite being Second Runner-Up in that show, instead of celebrating, Vishal is still cribbing and spreading unhappines. Rote hi rahoge kya? Sad.” (Suggested Read: Arpita Khan And Aayush Sharma's 16 Crore Apartment Gives Pinterest-Worthy Vibe, Take An Inside Tour) 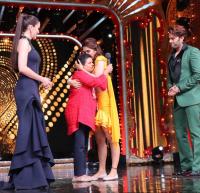 Mrs. Tuli also gave few celebrities' examples to make her point clear about the humbleness in a celebrity and said, “The bigger you grow, the more humble you should be. Who can make Vishal understand that? Let Vishal deep-dive into the Bigg Boss 13 game. He will know how girls can fight, if they want to. I wish him the best." When she was asked that 'Didn’t, she realizes that Vishal is an aggressive person during Madhurima and his courtship'?. To this Vijaya concluded the interview by saying, “Nope, honestly I didn't realise.” 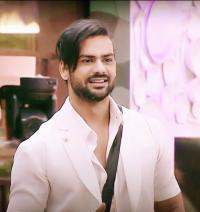 Madhurima Tuli’s mother, Vijaya Pant Tuli had appeared in one of the episodes of Nach Baliye 9 and had called Vishal Aditya Singh on-stage and asked him, why did he change. To which, Vishal had replied, “Main aapke liye abhi bhi waise hi hoon Vijaya. Aapse kuch shiqayat hi nahi hai.” Vijaya had continued that initially their fights didn’t bother her but when Vishal had compared Madhurima to his mother, that’s what had hurt her the most. She had explained him that just like a father has a special place in a daughter’s heart, it is similar for a mother-son relationship. And no, boyfriend/girlfriend can take that place of a father/mother. So, he shouldn’t have said those hurtful things to Madhurima. Being a celebrity, Vishal and Madhurima shouldn’t fight like this on-stage. And Madhurima, who had kept her head down the entire time, couldn’t control her tears and hugged her mother.

In a throwback interview with SpotboyE, Vijaya Pant Tuli had talked about Madhurima Tuli’s claim of not acknowledging Vishal after the show and had stated, “She did tell you that she won't even greet Vishal if and when she bumps into him ever, but I think nobody has seen the future. Aur, agar aap kisiko milo, toh baat-cheet ho jaati hai. I think the time is a great healer. When the issue is new, the parties in question are very angry with each other. Don't rule out just that they won't talk again. Don't rule out even that they won't work together again. Haven't several friendships in the film and TV industry broken and then mended? You see, whether they work together again and when would also depend a lot on the offer. A lot of people have seen and acknowledged their chemistry and dance onscreen, so I guess if the offer is meaty then why wouldn't they collaborate professionally?" (Do Read: Radhika Merchant Bonds With Future Father-In-Law, Mukesh Ambani At An Event) 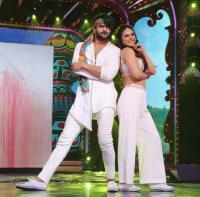 Is Vishal Aditya Singh using his ex, Madhurima Tuli’s name for popularity? What do you think? Keep us posted.