Madhurima Tuli turns a year older and since she was shooting for 'Nach Baliye 9' on her birthday, her co-contestants made sure to make it special for her. 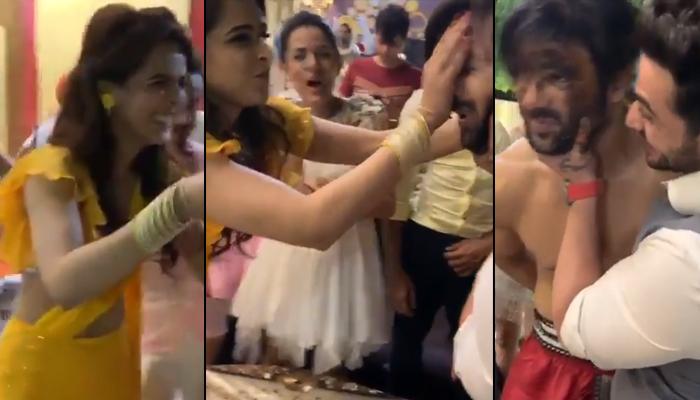 From Bekhayali to Agar Tum Saath Ho, the audience has been going crazy over the breathtaking performances of the ‘Kabir Singh’ jodi of Nach Baliye 9, Vishal Aditya Singh and Madhurima Tuli. But more than their sizzling performances on the dance reality show, it is their infamous arguments and fights on the national television that have been making it to the headlines. After meeting and falling for each other on their show, Chandrakanta, Vishal and Madhurima had broken up, only to reunite for Nach Baliye 9. (Also Read: Rohman Shawl's Latest Gesture For GF, Sushmita Sen Proves He Is In Awe Of Her And Is Her Biggest Fan)

While everyone hoped that Nach Baliye 9 would be a new beginning for the ex-couples and we might get to see them back together during the course of the show, Vishal Aditya Singh and Madhurima Tuli are disappointing their fans with each episode. Just how amazed we are with their performances, we are equally heartbroken with their fights on-stage. Vishal and Madhuri perfectly define, ‘I Hate You Like I Love You’.

On August 20, 2019, Madhurima Tuli turned a year older and since she was shooting for Nach Baliye 9 on her birthday, her co-contestants made sure to make it special for her. Posting the cake-cutting video on her Instagram handle, wherein she applies cake on her ex, Vishal’s face instead of feeding him a slice, Madhurima captioned it as “Thank you guys for making my birthday so special. This really means a lot. I always love to work on my birthday. And this was the best amongst all. Thank you @starplus @banijayasia and team #NachBaliye9 you’ll made it so special. Watch it till the end to enjoy the video!!”

In a recent interview with the Bombay Times, Vishal Aditya Singh blamed his ex, Madhurima Tuli for the breakup and had said, “One is either happy or sad in a relationship. However, when we were together, I was perpetually in a predicament whether to laugh or cry. She must have broken up 50-odd times during our courtship, over the pettiest of issues. I never wanted it to end because I was madly in love with her. Besides finding me desi and not fluent in English, I think she felt that I wasn’t financially strong. She would fight with me every time before we went out. I once asked her if she was ashamed to be seen with me in public, and she agreed. She was also abusive. I have never spoken about this before, but the relationship had started affecting my work. I was in a terrible state of mind during our courtship. It’s better to part ways if a relationship obstructs your growth. I was always averse to marriage and my break-up with Madhurima has made that resolve stronger. I just want to adopt a girl now.”

When asked why he agreed to be a part of the show with Madhurima Tuli, Vishal Aditya Singh had stated, “The makers approached me first and when I learnt that they wanted me to pair up with Madhurima, I turned down the offer. She told me that the show will boost her career and hence, she wanted to participate in it. I relented eventually, as my friends convinced me.” (Also Read: Pooja Batra Sports Red Bikini As Nawab Shah Flaunts His Abs In Pool, Give Beauty And The Beast Feel)

Revealing if the fights between them on Nach Baliye 9 are scripted or not, Vishal Aditya Singh was quoted as saying, “Let people think that it’s staged; I don’t care. If I am that rough on stage, they should know to what extent I have suffered in this relationship. To hug a person is my personal choice. I am not letting the equation come in the way of our work. If that was the case, I would have told the choreographer to avoid any hugging or intimacy in the performances. I am absolutely fine with the way I am behaving on the show and have no regrets. Just because I bare my heart on stage and she stays quiet, doesn’t mean that’s how it is backstage, too. Whatever you are seeing on screen is the real me and I am not faking it for the ratings. Nothing is scripted either. Though we share a vanity van, we don’t interact at all. But the minute the camera is on, she starts exchanging pleasantries. I can’t be fake like her. In fact, she claimed on the show that we broke up recently, but it’s been a year since we parted ways.”

On the other hand, Madhurima Tuli had shared her side of the story to SpotboyE and when she was asked to comment on Vishal’s claim of her having ‘bad temper’, she had retorted, “He is behaving as if he doesn't have a temper. In fact, I haven't reacted until now much and doesn't that imply that he has a temper which is worse than mine?” When asked, “Does he have temper issues?”, Madhurima had replied, “Of course, he does. Look at how he reacted on Episode 1.”

Sharing what had gone wrong between her and Vishal that led to their breakup, Madhurima was quoted as saying, “The thing is that he cannot take responsibility. If you tell your girlfriend that you will marry thrice in life, won't she be put off? You shouldn't say such things and yet keep going back to her.” She had further added, “Yes, he told me that he wants to marry thrice. Then we started having our fights. Those fights became aggressive. We started fighting in public places when we were tipsy and it all started creating scenes.” (Also Read: Sajid Khan Is Now Friends With Ex-Lover, Jacqueline Fernandes And Even Dropped Her Home Post Shoot?)