While the nation is still rooting for Sanjay Dutt’s controversial life in Sanju, there were a lot of pivotal moments of his life that remained untouched in the film. Well, it is difficult to squeeze in every life detail into two hours, especially when there is so much on the ground to cover. Sanju tries to portray Sanjay as a wholeheartedly family man, but that wasn’t always the case. (Also Read: Sanjay Dutt's Daughter, Trishala Dutt On How It Feels To Live Without Parents And Equation With Dad)

Sanjay Dutt’s first wife, Richa Sharma was diagnosed with a terminal illness of a brain tumour for which she was moved to the US for treatment. She took her last breath in New York at her parents’ home on December 10, 1996. Sanjay and Richa have a daughter, Trishala Dutt. After Richa’s death, the bond between father and daughter suffered to large extent. But over the years, they both have moved past their differences and share a beautiful camaraderie. 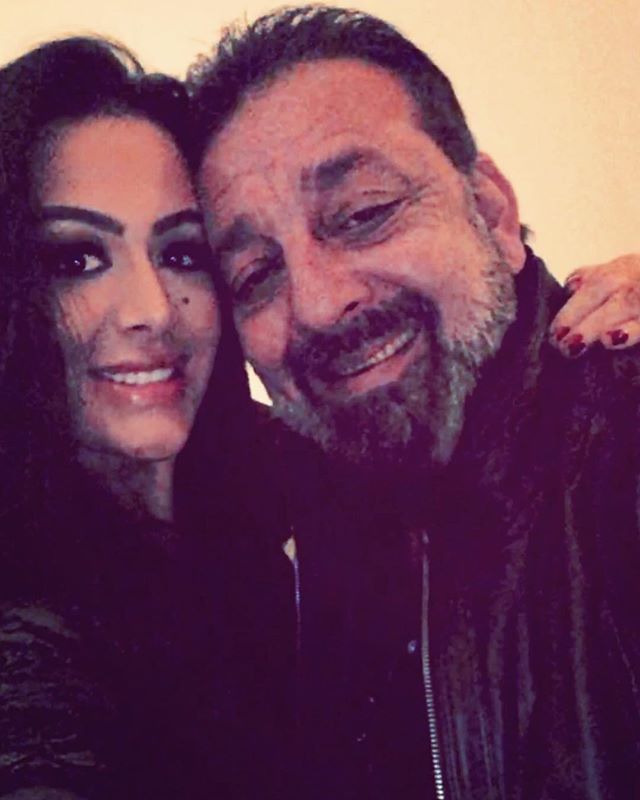 On August 10, 2018, Sanjay Dutt’s eldest daughter, Trishala celebrated her 30th birthday. And being an ardent social media user, Trishala shared a post thanking her fans and Instagram followers in a heartfelt way. Trishala wrote, “#30 — thank you God for blessing me with life, for making me the happiest I’ve ever been, and for keeping me alive, happy, and most importantly, healthy. Thank you everyone for all your love, sweet comments, thoughtful texts, phone calls that made my day so special.” (Also Checkout: Married With Naseeruddin For 35 Years Now, Ratna Shares A Warm Relation With Her Step-Daughter) The note further stated, “Thank you IG fam for loving supporting my family I since day 1. I appreciate all of you more than you know. Today feels amazing, I can’t wait to celebrate later, and I can’t wait to create beautiful new memories in this next chapter of my life will upload more pics and get back to you all in a bit — btw for those wondering, this is WolfGang! he’s a teacup Maltese, weighs 2.5lbs (1.17kgs), and was born in Korea! He licks my tears, senses all my emotions, manages my anxiety, and has the sweetest little soul that gives me unconditional love on a daily basis...a true angel. #teamleo #flirtythirtyandthriving #0810”. (Don't Miss: Kareena Kapoor Khan Hugs Her Step-Daughter, Sara Ali Khan On A Dinner Date With Saif Ali Khan) 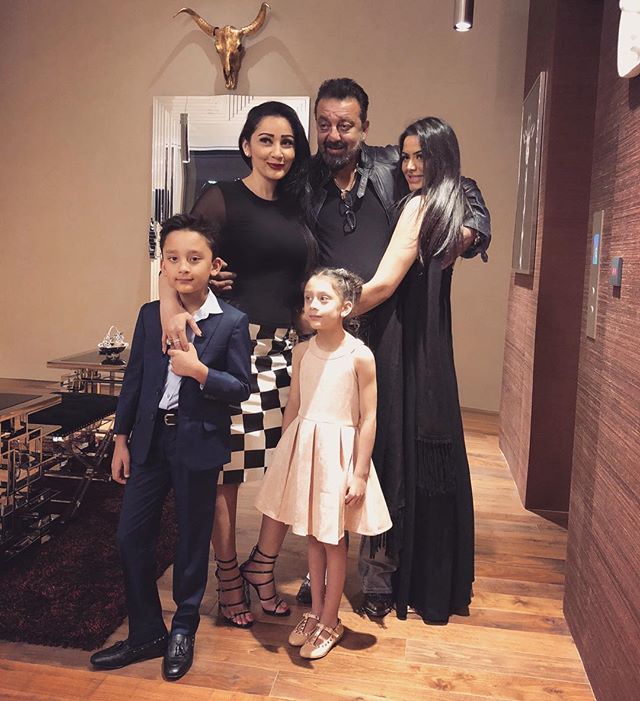 Post her mother’s demise, Trishala is living with her grandparents in the US and has been raised by them. Sanjay Dutt’s third wife, Maanayata Dutt commented on Trishala’s birthday post, and wrote, “Happy Happy to you my darling!! Wishing you the choicest of blessings my love.” Check it out here: 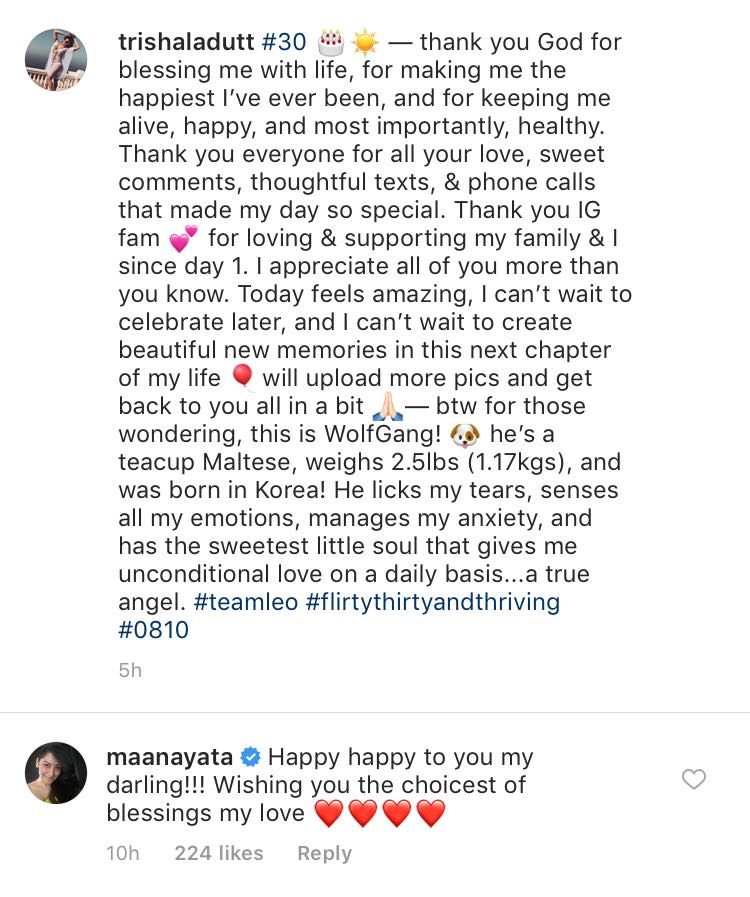 In Instagram’s latest feature, ‘Ask Me Any Question’, a follower asked Trishala, “How do you feel being Sanjay Dutt’s daughter?”, to which she replied, “Honestly, it feels normal. He’s like any other father. When I’m with him, it feels like I’m with my dad. It doesn’t feel any different than what you probably feel when you are with your father. I can’t explain it but it’s… normal.” Another Insta user asked her, “What’s the best thing you learned from your dad?”, and she wrote, “how to tell guys who waste my time and treat me like shit to F*** off.” (Also Read: Sanjay Dutt Is On A Vacation With Family, Maanayata Dutt Twins With Her Daughter Iqra Dutt) 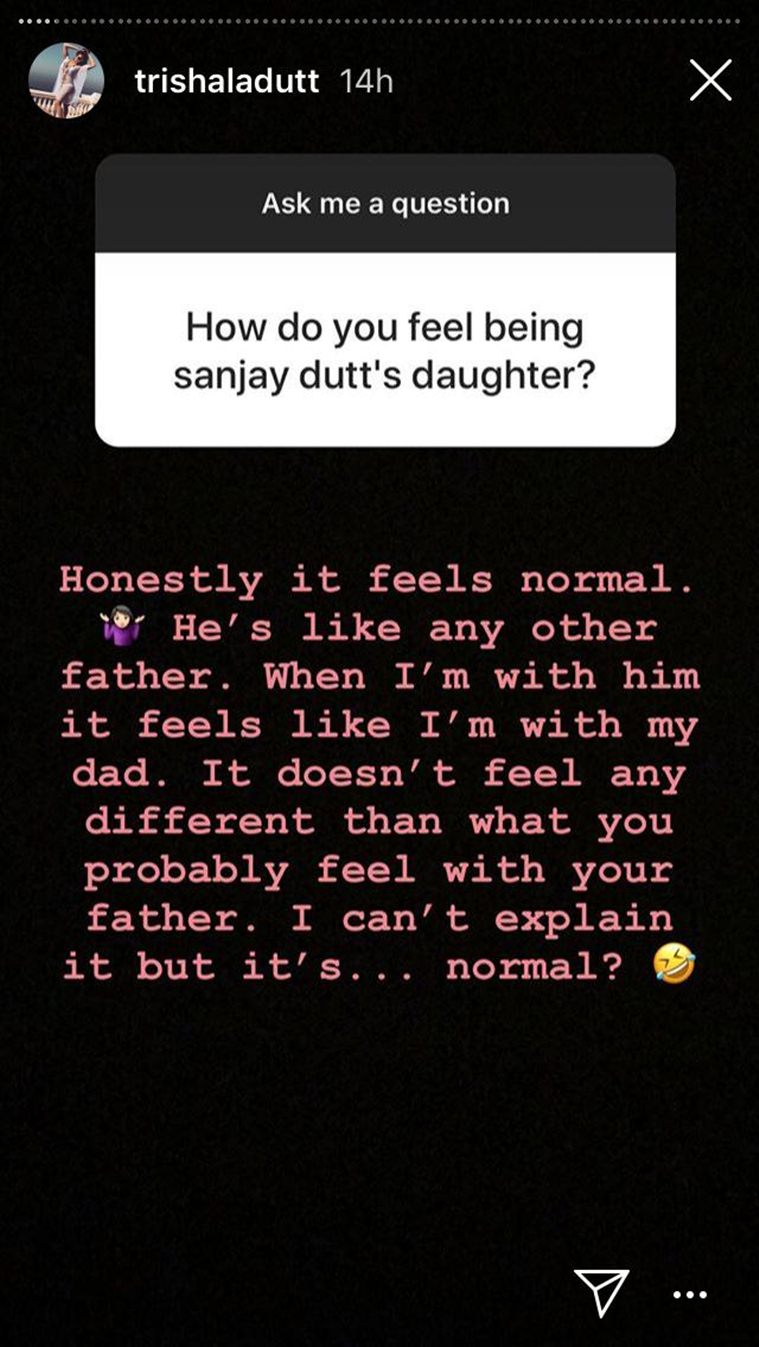 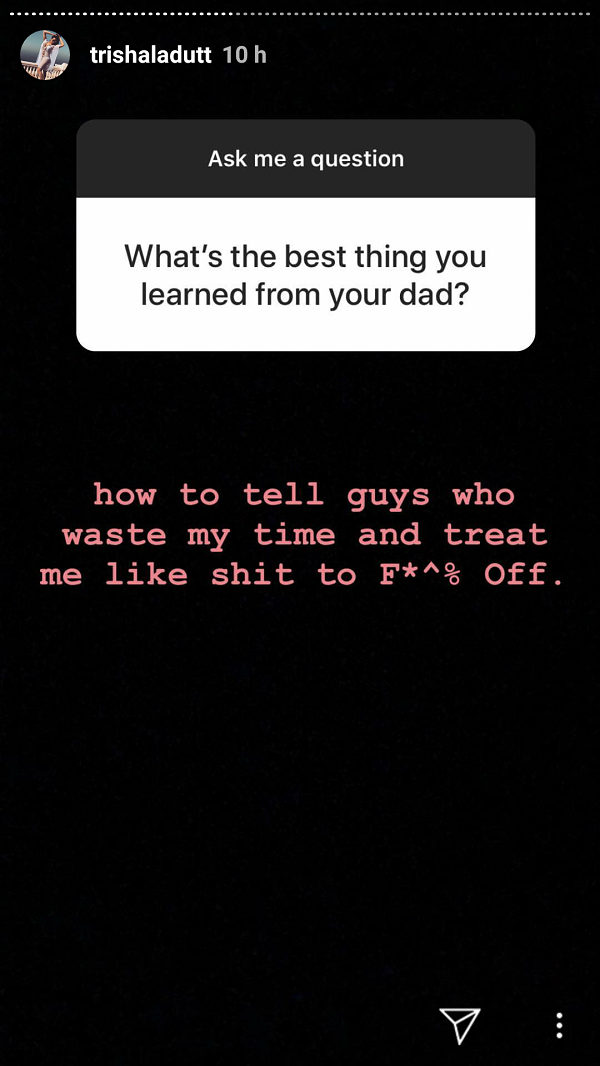 Then she was asked, “How is it living without your parents?”, to which Trishala answered, “umm… It’s fine, I guess. I never lived with them to begin with (I did but I was so young I don’t remember much) so I can’t really answer how it feels living without them.” When further asked if she is more like mom or dad, she replied, “My attitude and temper is like my dad. My kindness, gentleness and loving side is from my mom. My giving side and style is from both my parents.” 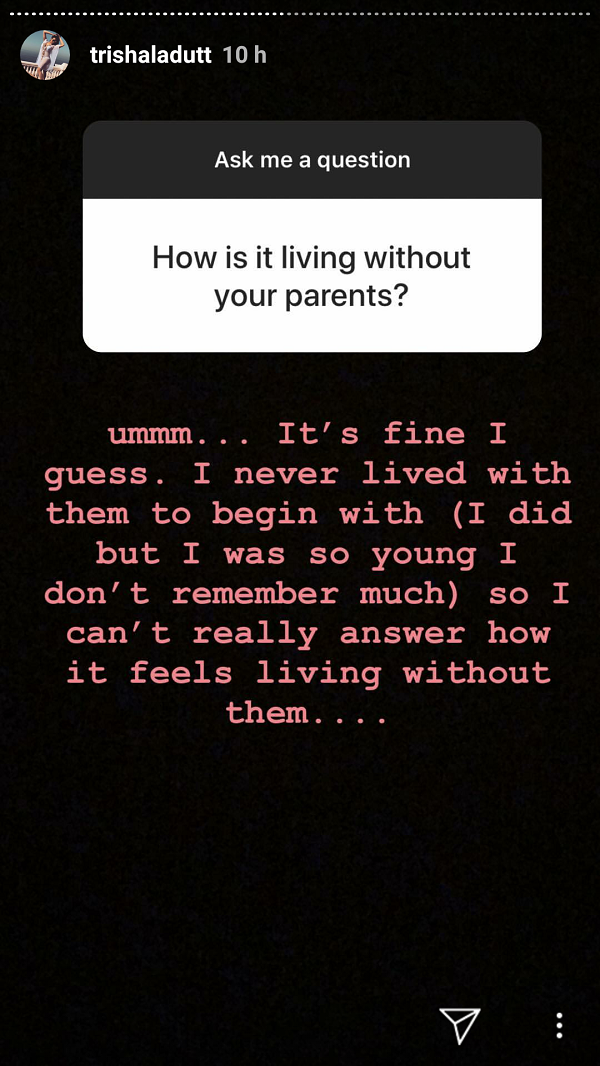 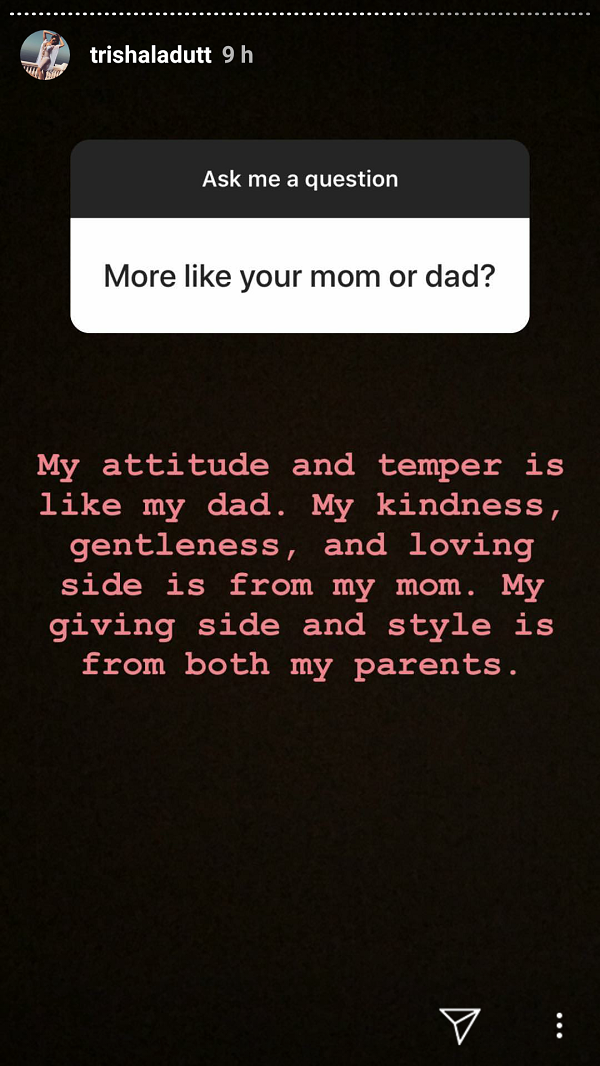 While promoting Bhoomi, Sanjay Dutt shared how he wanted to break Trishala’s legs when she expressed her wish to work in films. He was quoted as saying, ''She has specialised in forensic science... And I think that’s the great thing to do. Even if she wants to join the industry, she has to learn Hindi because American (English) will not work here. It is not easy to be an actor. It looks easy but it is quite difficult. Trishala wanted to be an actress and I wanted to break her legs.” On July 29, 2018, i.e., Sanjay Dutt’s birthday, Trishala took to her Instagram to wish her daddy dearest. She wrote, “Happy Birthday Daddy Dukes @duttsanjay — #teamleo #birthdayboy”. And on Father’s Day, Trishala posted a childhood photo in which little one is being twirled by her daddy. She captioned it, “The love between father and daughter knows no distance Happy Fathers Day to my real life hero, my one and only, the real OG @duttsanjay I love you very, very much. #fatheranddaughter #mydaddystrongest”. (Also Read: Sanjay Dutt Had Crazy 59th Birthday Celebrations, Maanayata Dutt Shares Inside Pictures And Video) 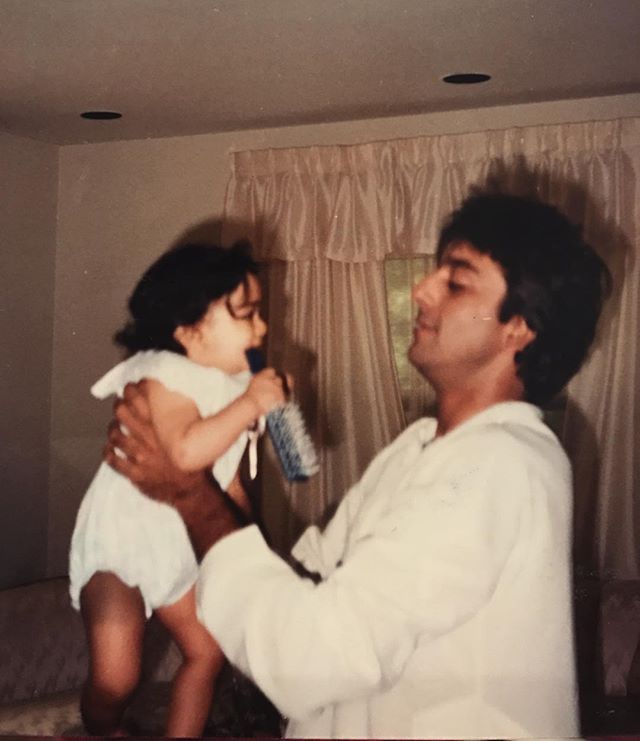 We wish Trishala Dutt a year full of happiness and love! 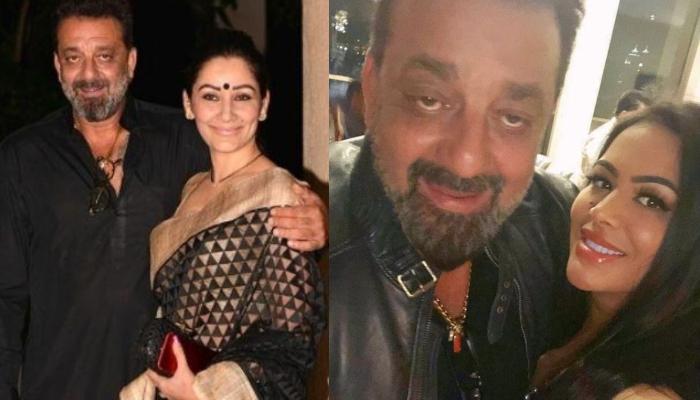 Sanjay Dutt and Maanayata Dutt are the perfect examples of relationship goals. From spending years in jail to being labelled as a womaniser, Sanjay's life has always been a roller coaster ride. And it is Maanayata, who has been his constant pillar of strength. As Sanjay turned a year older,