Kiran Rao Receives Aamir Khan With All Her Love On His 53rd Birthday, Gives The Best Gift To Him

Kiran Rao Receives Aamir Khan With All Her Love On His 53rd Birthday, Gives The Best Gift To Him Indian actor, Aamir Khan is celebrating his 53rd birthday today. Born on March 14, 1965, Aamir is undeniably a true superstar, not because he has millions of fans across the globe, and also not because his movies open to earth-shattering box-office records, but truly because what he delivers on-screen is perfect and flawless.  No other actor can pull off a character the way he does.

After charming everyone with his role in Secret Superstar, Aamir is now busy with Thugs of Hindostan. Amidst a hectic and busy schedule of shooting the film, Aamir flew down to Mumbai to celebrate his 53rd birthday. And guess who was waiting for him at the airport? Yes, you guessed it correctly. It was none other than his soulmate and his best friend, by his own admission, Kiran Rao. (Also Read: Daddy Kunal Kemmu Reveals The Secret Behind Inaaya Naumi Kemmu's Grey Eyes)

Kiran Rao attended to her hubby with flowers. They hugged, they kissed, they smiled and they showered love on each other. This truly shows the amount of love Aamir Khan and Kiran Rao have for each other. Surely, they must be missing each other so much, for Aamir has not been able to spend time with his family lately because of his work commitments. Here are a few pictures of Kiran Rao receiving Aamir Khan with flowers, kisses and hugs on his 53rd birthday: 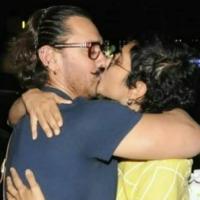 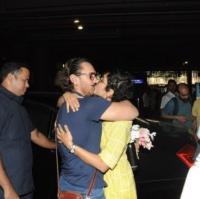 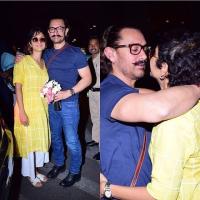 Aamir had been in Jodhpur for a while where he was shooting for his next project, Thugs of Hindostan which also stars Amitabh Bachchan, Katrina Kaif and Fatima Sana Sheikh. After his elated wife, Kiran received him warmly, they went to their residence at Freeda Apartments where Aamir cut his birthday cake with Kiran, in front of media persons. The pics and videos of Aamir Khan’s 53rd birthday are going viral online. Take a look at few of them: 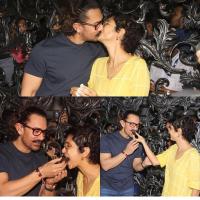 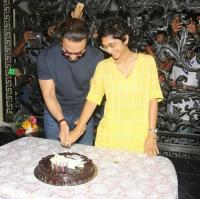 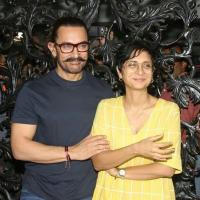 After the celebrations, Aamir spoke to the media about his film and Amitabh Bachchan’s health, the news of which has been floating a lot these days. Aamir said, “I shot with Amitji last night itself. It’s true that he has pain in the shoulder and back. But this film also has a lot of action scenes for him. I think it is after a lot of years that you will see Amitji doing a lot of action. So, it’s definitely a challenging film for him and he is coping very well with it.” (Suggested Read: Aamir Khan's Statements On Surrogacy Should Inspire Couples Who Can't Conceive Naturally)

He further added, “He has had a shoulder and back injury. The pain had got aggravated day before, but he is better now.”

It’s been a long tradition for Aamir to celebrate his birthday in his home and eat the biryani made by his mom. In fact, on his 53rd birthday, Aamir also made a debut on Instagram and posted his mother pics. The tradition also follows that he goes to a press conference in the evening and answer the media people. (Also Read: Disha Vakani Of 'Taarak Mehta..' Fame Reveals The Name Of Her 3-Month-Old Daughter)

We wish him a very happy birthday. And Kiran Rao receiving Aamir Khan with kisses, hugs and flowers on his 53rd birthday is possibly the best gift that Aamir can get.