The younger daughter of director, Boney Kapoor and actress, Sridevi, has been stealing hearts much before making her debut in Bollywood. Though her elder sister, Janhvi Kapoor, has already made it big on the silver screen, and garnered huge accolades, fans are eagerly waiting for Khushi to make her appearance on the big screen. Time and again, this star kid has set the internet on fire with her sartorial choices.

A few hours ago, actress, Sonam Kapoor had taken to her IG handle to drop two pictures from her cousin, Mohit Marwah's wife, Antara Marwah's baby shower. Sharing the pictures, Sonam had written, "Khaandaan for the #godhbharai of @antara_m missing @janhvikapoor @aashittarelan16 @harshvarrdhankapoor @jahaankapoor26 we love you #antumoh." The pictures of the Kapoor clan have gone viral like anything. However, it was Khushi Kapoor's ensemble, that stole the show yet again. The diva was styled by Tanvi Ghavri and her stylist shared a few pictures of her, and that has created quite a buzz on social media. Khushi’s icy blue and off-white hued outfit was paired with an unconventional blouse, which was actually a chic strappy blue printed crop top with a sheer white side sweep. However, it was the price of the lehenga, that is breaking all the headlines once again. 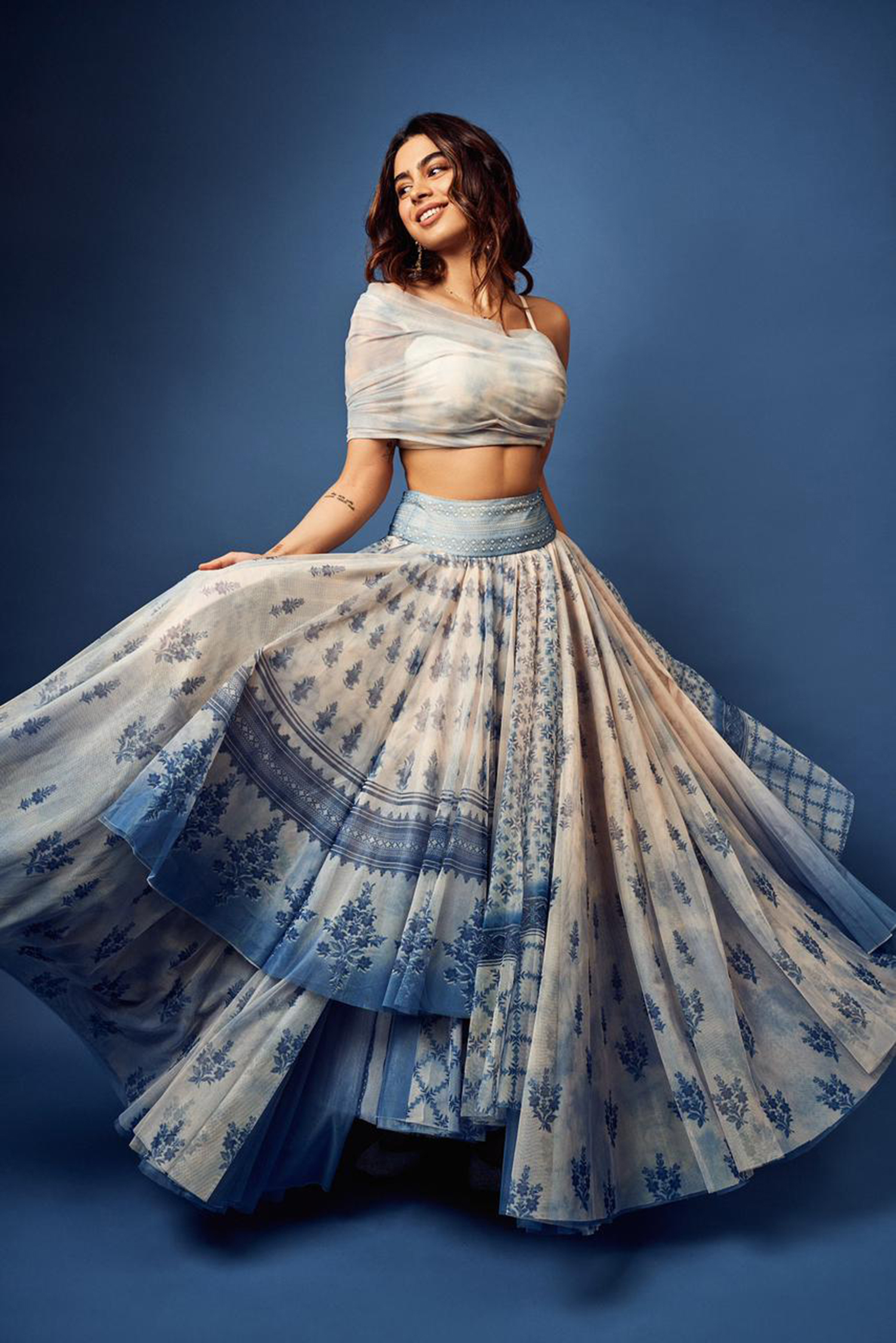 Khushi’s crop top and lehenga set is from the shelves of ace-designer, Anita Dongre’s label, and she channelled subtle spring vibes in the pretty ensemble. The outfit is available on the designer’s website for Rs. 95,000. Any girl, who wishes to wear the lehenga, she can take cues from Khushi and choose minimal styling aesthetics. Khushi wore that modern-esque lehenga and paired it up with a dainty chain, statement earrings and matching bracelets from Anita Dongre. Along with her juttis from Fizzy Goblet.

Suggested Read: Deepika Padukone Aces Her Look In All-White Blazer And Pants From Zara That Costs Less Than Rs 1000

Khushi Kapoor opted for her tresses to be left open in a middle parting and styled them in soft curls. The star kid chose nude lips for the makeup and light shimmery brown eyeshadow with a hint of blush and highlighter. According to the website, this attire is called 'The Forest Pixie' and is described as "A chic blue crop top with a side sweep paired with an asymmetrically flared skirt. Floral stripes enhance the elegant asymmetry. Complete with a dusting of blue flower prints and side pockets." 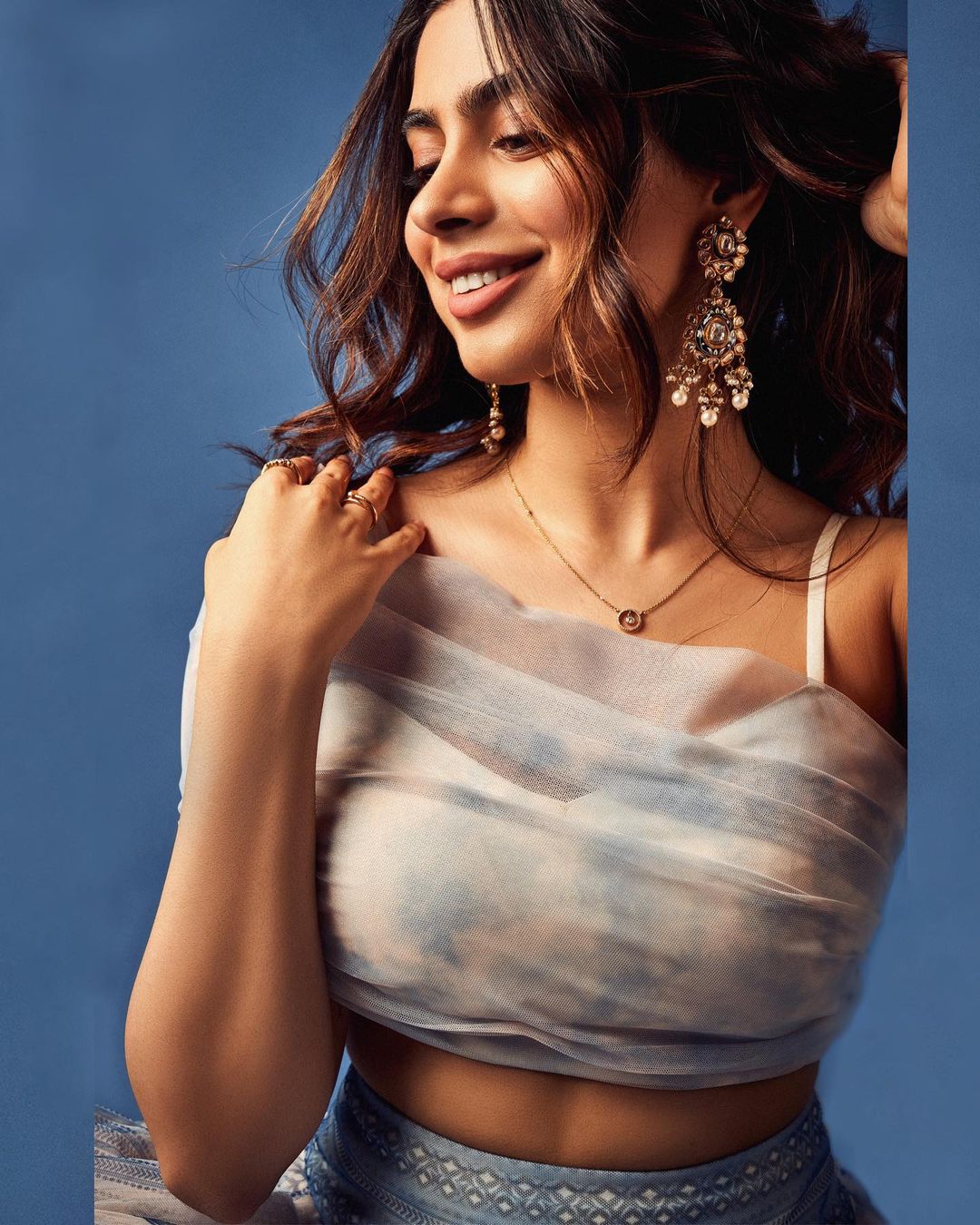 At Rhea Kapoor's wedding reception, Khushi had stunned everyone with her look. And yet again, it was her super-expensive pretty pink bag that had stolen all the attention. The mini bag was from the luxury brand, Prada and is priced at € 1,200 on its official website, which comes up to Rs 1,04,754 approximately. For the event, Khushi had donned a floral dress with a plunging neckline and a high slit from the House of CB. Khushi's elegant puffed sleeve midi dress costed £129, which is approximately Rs. 13,241. 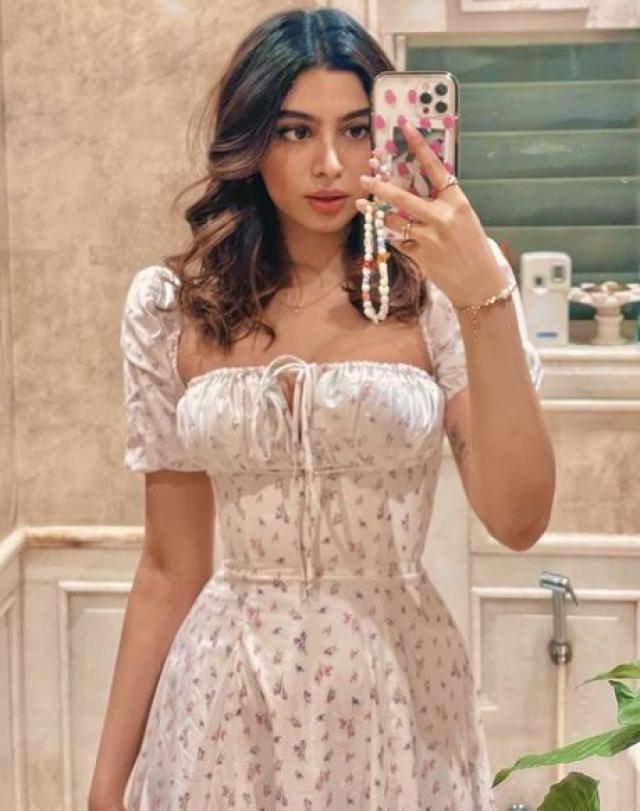 Hasn't Khushi stolen the show? What do you think? Let us know!