Nothing can ever heal the pain of losing your loved one, especially your mother. Check out how Khushi Kapoor remembered her late mother, Sridevi on her third death anniversary!

There are no final goodbyes when death comes knocking on the door! No amount of words or love can ever heal the pain of losing your closed ones, especially your mother. You feel an irreparable hole in your heart and every day without her. After all, a mother is the pillar of support in a child's life, they never stop caring for them until their last breath, and losing them is the worse kind of heartbreak. And Bollywood producer, Boney Kapoor and late legendary actress, Sridevi Kapoor's daughters, Janhvi Kapoor and Khushi Kapoor had gone through the same when they had lost their mother three years ago. (Recommend Read: Pooja Bhatt's Unseen And Priceless Moments With Her Step-Sisters, Alia Bhatt And Shaheen Bhatt)

It was on February 24, 2018, when India had woken up to the news of legendary actress, Sridevi Kapoor's demise. The reports had stated that Sridevi had died due to accidental drowning in Dubai. Since then, she had created a permanent void in the Kapoor family. We have often seen Janhvi's moist eyes, which longs to see her mother's face and Khushi, who just wants to hug her mommy. However, the sister duo knows how to stay strong for their father, Boney Kapoor. On February 24, 2021, Khushi took to her Instagram handle and posted a rare picture of her mother, Sridevi with Boney Kapoor. The candid picture shows Sridevi and Boney Kapoor smiling and it perfectly radiates the love they had for each other. The gorgeous star kid just used a heart emoji to sum-up her emotions. Check it out below: A few hours ago, Janhvi had also taken to her IG handle and had shared a rare handwritten note of her mommy, Sridevi for her. In the note, Sridevi had written, "I love you my labbu, you are the best baby in the world." Alongside the post, Janhvi had written, "Miss you." (Also Read: Sania Mirza's Emotional Birthday Wish For Her Baby Sister Anam Mirza Gives A Glimpse Of Sibling Love) 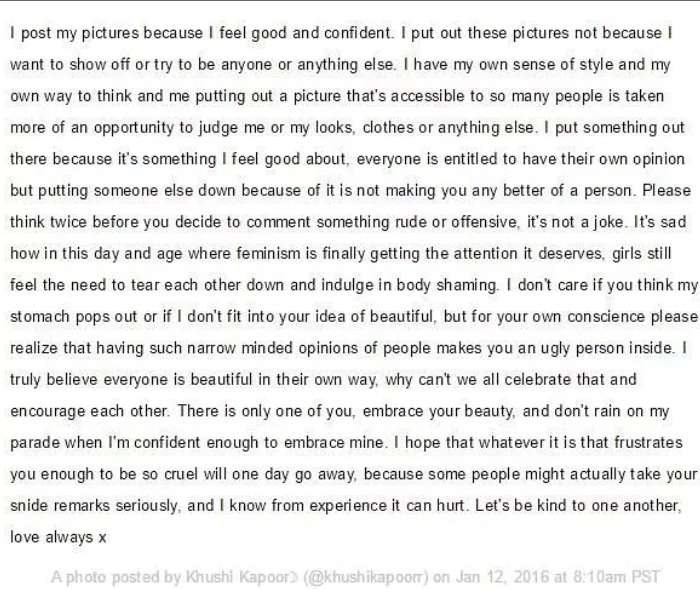 In a throwback interview with the Mid-Day, Sridevi had talked about her daughter, Khushi's strong note and had said, "For me, they will always be kids. But they seem to have taken less after me and more after my bold screen image. Last year, when Khushi wrote a post about body shaming on Instagram, I was pleasantly surprised to see my kid turn into a strong, opinionated and sharp young woman." (Don't Miss: Did You Know Neha Dhupia And Angad Bedi Had Once Forgotten Their Newborn Daughter, Mehr At Home?)

Well, we all miss Sridevi!