To mark five years of their engagement, Radhika Pandit posted an unseen video, reminiscing the beautiful day with her hubby, Yash.

One of the most sought-after couples of the South film industry, K.G.F. star, Yash and Radhika Pandit have reinstated our faith in love and marriage. From co-stars to friends and now soulmates, their journey has been inspiring. They had met each other on the sets of their show, Nanda Gokula but it was only after their third film together, when Cupid had struck them with its sharpest arrow.

After falling in love with each other, Yash and Radhika got engaged on August 12, 2016, in Goa. And on December 9, 2016, the duo had tied the knot in a private ceremony in Bangalore. After two years of marital bliss, on December 2, 2018, Yash and Radhika had welcomed a little angel in their lives, whom they have lovingly named Ayra. And on October 30, 2019, the lovely couple had embraced parenthood for the second time and had completed their family with the arrival of their baby boy, Yatharv. 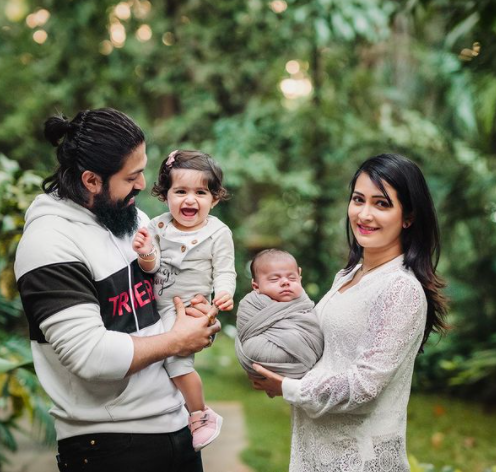 August 12, 2021, marked five years to Yash and Radhika Pandit's engagement and the doting wife, Radhika shared an unseen video reminiscing the beautiful day. Along with the video, Radhika penned a heartfelt note for her 'incredible man' which can be read as "It's been 5yrs today that I got engaged to this incredible man, in my favourite place with my favourite people being around! I still remember this day, like it was yesterday... sharing this video just to relive that perfect day again."

Recommended Read: Kareena Kapoor Removed Her Wedding Ring When She Was Eight Months Pregnant With Jehangir, Know Why Valentine's Day holds a very special place in Yash and Radhika's life as it was on this day when he had proposed to her. On Valentine's 2021, Radhika had shared a candid picture with Yash on her IG handle and had written, "Wearing a smile u gave me... Happy Valentine's." On January 8, 2021, Yash had turned 35 and it was his doting wife, Radhika Pandit, who had penned an adorable birthday wish for her ‘bestie’. She had taken to her IG handle and had shared a lovely candid picture with him from the cake cutting moment and had written, “Sometimes I wonder, why you are so perfect for me… then I realise its coz u let me have your share of cake too. Happy birthday my Bestie.”

Also Read: 'Kundali Bhagya' Fame, Isha Anand Opens Up About Her Pregnancy, Worries About Getting Back To Shape Sending truckloads of love to Yash and Radhika on their special day!