Katrina Kaif Shares A Mushy Glimpse Of Her Hand-In-Hand Moment With Her Hubby, Vicky Kaushal

Katrina Kaif shared a beautiful glimpse from her marriage dairies with her darling hubby, Vicky Kaushal clicked at the sea-facing veranda of their home. Check it out!

Bollywood actress, Katrina Kaif is spending the most beautiful phase of her married life with her darling husband, Vicky Kaushal. It was on December 9, 2021, when the Bollywood's handsome hunk had tied the forever knot with the stunning diva of Tinseltown. Since then, starting from spending their first Lohri, Holi to attending various parties of the industry, the couple never miss a chance to swoon our hearts with their mushy glimpses.

For instance, on August 31st, 2022, Katrina Kaif and Vicky Kaushal appeared at the grand Ganesh Chaturthi puja hosted by Salman Khan’s stepsister, Arpita Khan Sharma at her place. The event was indeed a star-studded one and for Vicky and Katrina it was their first Ganesh Chaturthi post-marriage. For the event, Katrina opted for a lime-coloured sharara set from the shelves of ace designer, Tarun Tahiliani. And her darling hubby twinned with her in a matching coloured kurta-pyjama. Check out their glimpses: 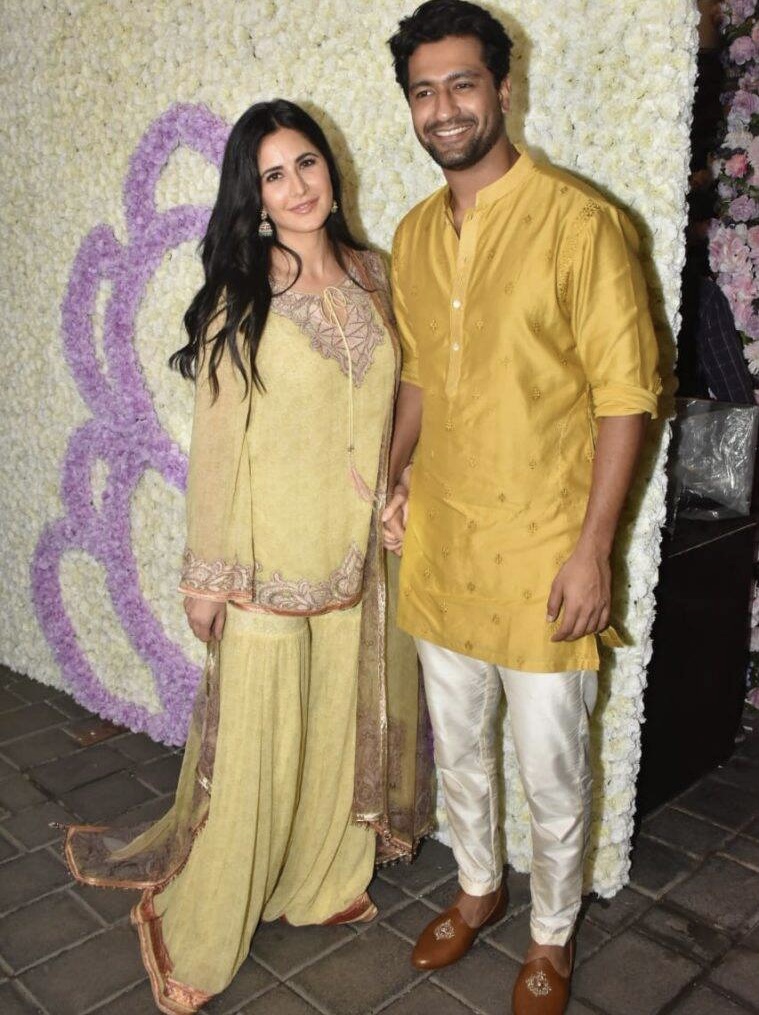 On September 20, 2022, Katrina Kaif took to her IG stories and shared a beautiful glimpse from her hand-in-hand moment with her darling hubby, Vicky Kaushal. The picture was clicked at the sea-facing veranda of their home, and in the backdrop of it we can see the mesmerising view of the sea. Sharing the alluring picture of the duo, she drew a heart sign atop it. Check it out: Earlier, Katrina Kaif had graced the popular reality show, Koffee With Karan 7, and talked about her married life with Vicky Kaushal. During the rapid-fire round, she revealed that she was diagnosed with covid-19 in June 2022. Further, she shared how post-recovery, she celebrated her birthday in the Maldives with Vicky Kaushal, her devar, Sunny Kaushal, Illeana D’Cruz and many of her close ones on July 16, 2022. However, even after the recovery, the actress had fatigue and weakness. And to lift her mood, it was Vicky who performed for 45 minutes on all of Katrina’s songs to make her smile. In Katrina's words:

“On my birthday, I was just recovering from being very unwell. I had a very tough time with Covid. He could sense that I was not having a good time and somehow, he just turned the switch. He did a 45-minute concert of every single song of mine and danced entire songs. And everyone sat down, and stopped dancing. Everyone was like, ‘How does he know every step?’ The steps weren’t perfect but he just got the vibe, and danced it through. But the reason behind it was to make me laugh.”

Also Read: Gauri Khan Wants To Spend Diwali With Her Hubby, SRK And Kids At Mannat Doing THESE Cute Things Further, she revealed how she knew nothing about Vicky before meeting him. However, once they met, she was indeed in love. Katrina added how everything aligned beautifully, making her realise that marrying Vicky was in her destiny, she had stated:

“I did not even know much about him. He was just a name I had heard but had never associated with. But then, when I met him, I was won over. It was my destiny and it was really meant to be. There were so many coincidences that at one point all of it just felt so unreal.” We love Vicky and Katrina's beautiful glimpse! What about you? Let us know!

Next Read: Priyanka Chopra Posts Cutesy Pictures With Her Baby Girl, Malti As They Look Outside From Window