Bollywood actress, Sonam Kapoor Ahuja is celebrating the first month's birthday of her son. Check out her baby's cute picture!

Bollywood actress, Sonam Kapoor Ahuja is busy taking care of her little munchkin. The gorgeousness, who is hailed as the fashionista of Bollywood, is now running after her baby as he has taken all the space in her heart and life. After the birth of her baby, Sonam Kapoor Ahuja and Anand Ahuja made sure to keep their baby away from the media glares.

On August 20, 2022, Sonam and Anand announced the arrival of their baby on their IG handles. In the picture postcard, Sonam and Anand shared their excitement about becoming parents with the world. Since then, fans have been waiting to get a glimpse of Sonam and Anand's newborn baby. On September 20, 2022, Sonam and Anand's son completed one month, and the doting parents shared the first-ever picture with him. In the photo, we can see the entire family wearing matching ensembles from their designer friend, Anamika Khanna. While Sonam looked pretty in an Anarkali suit, Anand and their baby twinned in matching yellow-coloured kurtas. Check it out: 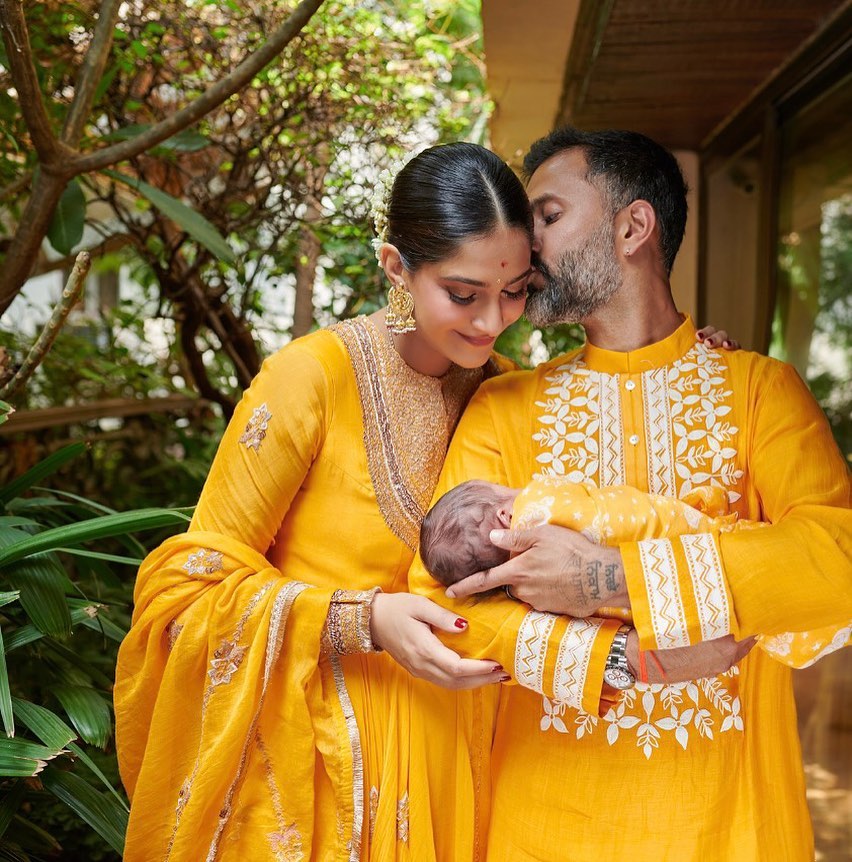 Sonam also revealed her baby's unique name, 'Vayu'. In a long post, Sonam revealed why she had chosen Vayu as her son's name. The actress shared that in Hindu scriptures Vayu is one of the paanch tatvas. Her long note can be read as:

"In the spirit of the force that has breathed new meaning into our lives. In the spirit of Hanuman and Bheem who embody immense courage and strength. In the spirit of all that is sacred, life-giving and eternally ours, we seek blessings for our son, Vayu Kapoor Ahuja. In Hindu scriptures Vayu is one of the paanch tatvas. He is the deity of breath, the spiritual father of Hanuman, Bheem and Madhav and He is the incredibly powerful lord of wind. Praana is Vayu, a guiding force of life and intelligence in the universe. All the deity's of Praana, Indra, Shiva and Kali relate to Vayu. He can breathe life into beings as easily as he can destroy evil. Vayu is said to be heroic, brave and mesmerisingly beautiful. Thank you for your continued wishes and blessings for Vayu and his family." 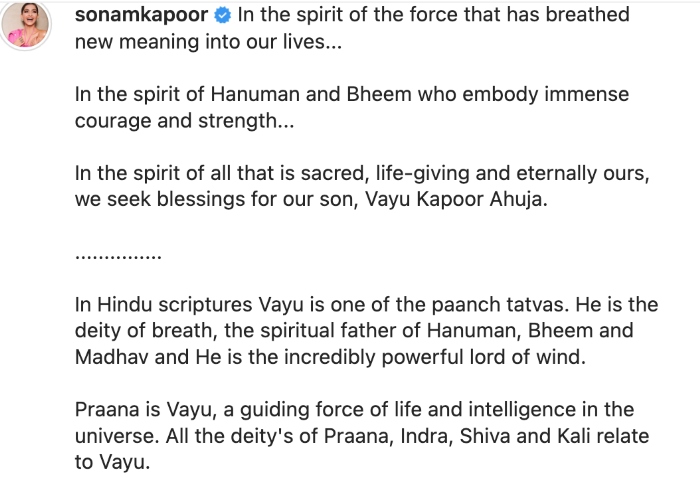 Sonam took to her Instagram stories and posted a cutesy picture of her baby boy's first-month birthday cake. In the picture, we can see a yummy 'Boss Baby' cake. It was decorated with a Boss Baby cake topper. Atop it was written, "30 days of love. Happy 1 month' with icing. We cannot wait to see the face reveal of Sonam's son! What about you?

Next Read: Salman Khan Not Charging Rs. 1000 Crores For 'Bigg Boss 16', Instead He Goes For A Pay Cut