Kartik Aaryan and Sara Ali Khan's alleged relationship is growing stronger with each passing day. Yesterday, when Sara walked at ICW2019, Kartik cheered along with Ibrahim. Videos and pics inside.

Main apni favourite hoon, mujhe bachpan se hi shaadi krne ka bahut craze tha... These dialogues from Jab We Met perfectly summarises the rising star of Bollywood, Sara Ali Khan for she is total filmy in real life as well. Sara is just two movies old, but she has successfully managed to make her own space in the showbiz world and in the hearts of the audience. More than her acting, she is being loved for her confidence, kindness and frank nature.

Sara made her debut on Koffee With Karan 6 when she had come with her abba, Saif Ali Khan. While people had loved her body language and that confidence at her first-ever interview, it was her blunt and open crush confession that made everyone go ‘awww’ for her. On the show, she had frankly announced having a crush on Kartik Aaryan and the rest as we say is history! (Also Read: Shahid Kapoor And Mira Kapoor Sizzles On The Cover Of A Magazine, Twins In Anita Dongre's Ensemble) 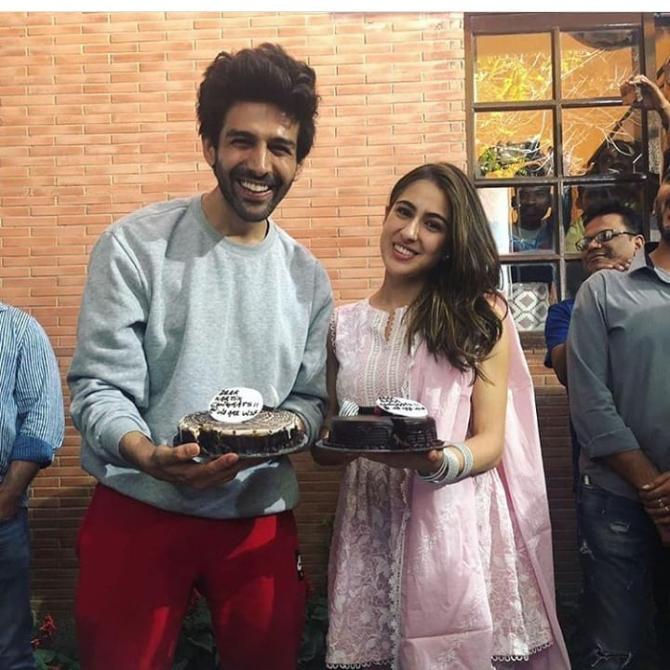 Ever since then, their dating rumours started doing the rounds. The icing on the cake was when Imtiaz Ali had signed them together for his upcoming film, Aaj Kal. Later, they were spotted together on dinner dates and get-togethers, and lately, he even guarded his alleged ladylove when they were mobbed by fans.

On July 26, 2019, Sara Ali Khan got another feather on her cap as she walked the ramp at ICW2019 for Falguni and Shane Peacock. The actress looked super-gorgeous in a glittering lehenga choli having intricate work on it. Her lovely locks, almost her no-makeup look and sheer confidence won many hearts. What grabbed everyone’s attention was how her crush-turned-beau, Kartik Aaryan cheered for her along with her brother, Ibrahim Ali Khan. The two couldn’t stop clapping for the lady and we loved the way they bonded. Don’t believe us? Take a look at the videos and a few pictures:

Also, as per the Mumbai Mirror report recently, things are turning serious for Sara and Kartik. The two usually Facetime each other when not together. The report had also suggested that Kartik had video-called Sara to get her views on his clothes, hair and styling before one of his events. (Checkout: Amy Jackson's Family Is All Set To Welcome The New Member, Reveals The Due Date) On July 1, 2019, when Sara and Kartik had wrapped up their shooting for Imtiaz Ali’s next Aaj Kal, both of them had taken to their Instagram handles to post a heart-warming note. Sara had written, “It's a WRAP!! 66 days & a million memories Thank you @imtiazaliofficial for making my dream come true. I truly appreciate your warmth, patience and consideration with me every single day. Being on your set has been a privilege that I will always cherish and already miss. Thank you @kartikaaryan for instantly making me comfortable with you, for selflessly giving and for consistently looking out for me. From coffees about you to chai’s with you, I wish we could do it all over again. I’m going to miss you more than you know and more than I can admit.” On the other hand, Kartik had written, “When Veera says, “Par yeh raasta, yeh bahut accha hai. Mein chahti hoon ki yeh raasta kabhi khatam na ho.” This is what shooting with @imtiazaliofficial feels like. 66 days were wayyy too less. It's a wrap. A film I never wanted to end. Thank you to my dream director. And couldn't have asked for a better saathi in this journey than Princess @saraalikhan95. Want to work with you again and again and again.” (Do Read: Deepika Singh Reveals Her Son, Soham Is Super Excited For Her Birthday) How cute Kartik and Sara look together! What do you guys have to say about his gesture at the event? Do let us know! Kahin naa kahin, koi naa koi mere liye banaya gaya hai… Remember this dialogue from Dil To Pagal Hai? This has exactly been the case with one of the wittiest, frank, vocal and quite filmy rising stars of Bollywood, Sara Ali Khan. Right from her pretty looks, amazing acting skills,