Ever since Pataudi princess, Sara Ali Khan revealed on Karan Johar’s chat show, Koffee With Karan season 6 that she would ‘like to date Kartik Aaryan’, we all have been going gaga about when will we spot Kartik and Sara coming out of a plush Bandra eatery, hand-in-hand! While looks like we need to wait some more to catch a glimpse of the same, but you might see the two actors doing the same and even ‘something more’ in their reel-life for the two are all set to star in Imtiaz Ali’s sequel of Love Aaj Kal. (Do Read: Vicky Kaushal And Harleen Sethi Unfollowed Each Other On Social Media Making Breakup Insta-Official)

Sara Ali Khan and Kartik Aaryan have begun shooting for the film, which will primarily be shot in Delhi and Punjab. The shooting in Delhi began from March 04, 2019, and a video from the sets of the film became viral in no time. While yes, the appearance of the duo together in the same frame definitely made a difference, but it was their passionate liplock (for the film, of course!) in the video that made us tell Kartik Aaryan, “Please ask her out on a date!” In case you missed the same, here is the video:

And now, in an interview with BollywoodLife, we get to hear Kartik Aaryan’s version on the leaked liplock video. Speaking about the film and the video, the Sonu Ki Titu KI Sweety actor shared, “I'm doing Imtiaz sir’s next and the producers Window Seat films will be able to elaborate about it! And talking about that video… was that really Sara and me?” and laughed it out. Kartik Aaryan’s recent film with Kriti Sanon, Luka Chuppi earned him tonnes of accolades for his performance yet again. And during the promotions of the film, the 28-year-old actor didn't give a concrete answer about working in a film together with Sara Ali Khan. Speaking about the same with Times Now, Kartik had shared, “I don't know koi soch raha ho shayad se. I have no knowledge about it. I think Sara ko poochna chahiye agar koi offer aaya hai toh.” And it was only later when Kartik confirmed the news of he and Sara starring in Love Aaj Kal 2, together. (Also Read: Alia Bhatt Talks About Her Wedding Plans With Ranbir Kapoor, Says 'It Hasn't Even Crossed My Mind')

Kartik Aaryan, in almost every interview is asked about Sara Ali Khan and the best part is, he is not fed up with it! When the portal asked Kartik if he is fed up with answering questions about Sara, time and again in promotions, the actor quipped, “Why will I be fed up? Not fed up at all.” To which Kartik’s co-star, Kriti Sanon too, joked, “Poocho poocho...abhi dus questions!” Kriti also shared in the same interview, “I don't think they have spoken to each other so much than about each other.” 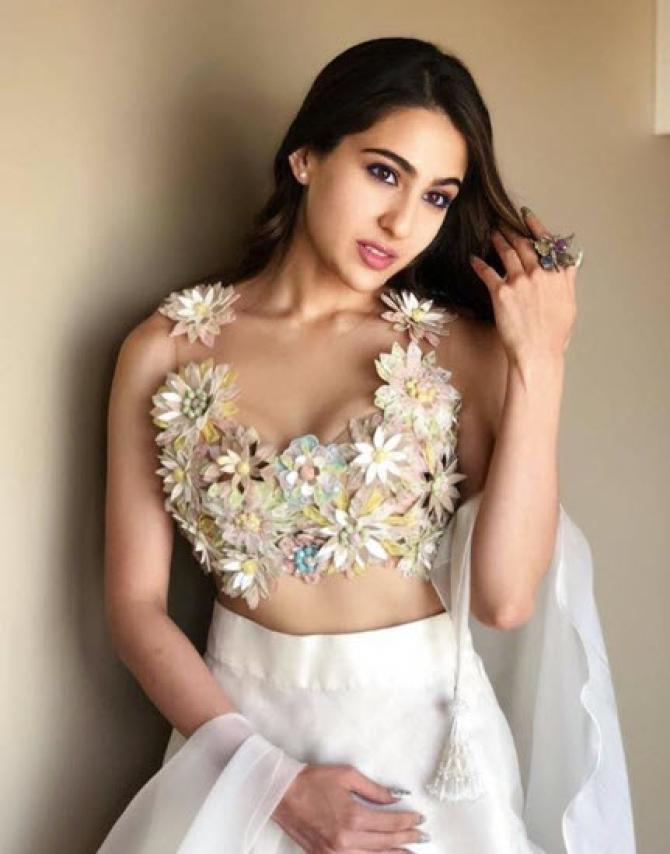 Sara Ali Khan’s liking for Kartik Aaryan is not unknown to people and admit it or not, we all have been doing our silent prayers, hoping that Sara and Kartik actually date someday! In a chat session with Bombay Times online, the Kedarnath actress got all candid when it came to expressing her liking for her latest co-star, Kartik! While we will get into all the details later, in the following video, you will once again see Sara in her candid avatar. A segment of the video had asked Sara to swipe right or left (right indicating yes and left indicating no) when given a couple of names. When it came to choosing Kartik, Sara immediately got all excited and gave him multiple right swipes!

When asked about Ranbir Kapoor (whom she had once wanted to marry), an all-honest Sara Ali Khan shared that “he is getting married to Alia now” and gave him a left swipe! In the following video, when asked what would she like to gift Kartik Aaryan, she couldn’t stop blushing and gestured a heart with her hand, indicating that she would like to gift him love! How adorable isn’t it? Checkout the video here: (Must Read: Sushmita Sen Poses With Beau Rohman Shawl At London Airport As They Head Out For Vacation)

At the Lokmat Most Stylish Awards 2018, held in Mumbai on December 19, 2018, Simmba co-stars, Ranveer Singh and Sara Ali Khan and the latter’s crush, Kartik Aaryan were all present under the same roof. As soon as Ranveer spotted Kartik, he at once, went to him and introduced him to Sara. But Ranveer didn’t stop at just that! While Kartik and Sara were busy exchanging formalities, Ranveer was making hand-hearts and pointing towards them! Checkout a picture of the same here: 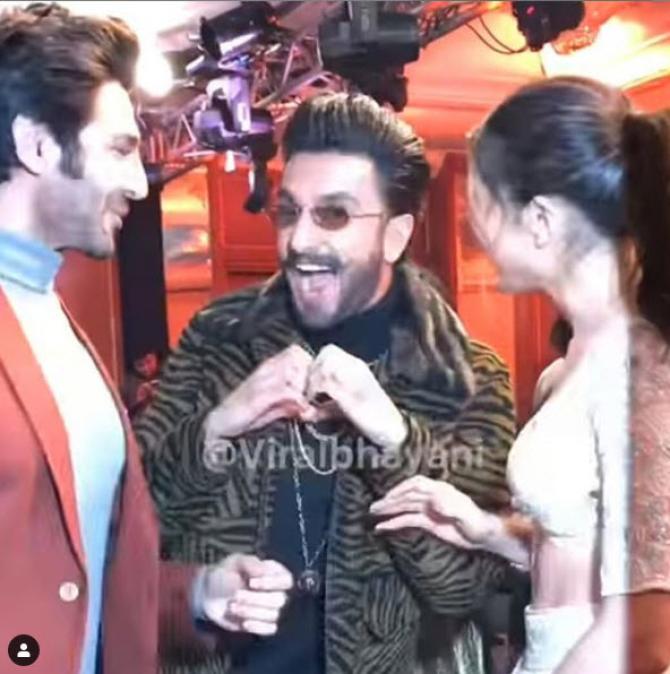 Referring to Kartik Aaryan's reply, guys, don't you think it was Kartik Aaryan and Sara Ali Khan in the viral liplock video? Let us know!