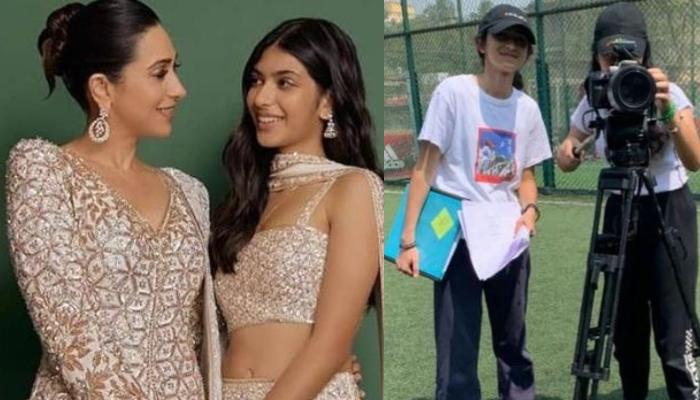 It’s never easy to deliver a concept in a short film, whose general time limit is around 10-15 mins. One of the biggest challenges that a lot of filmmakers face while making a short film is to deliver their concept rightfully. While some short films are visually perfect, some lack a lot of storytelling and meaning. Thus, it’s never easy to bring a perfect short film in front of the audience and the challenge gets doubled when we talk about strong topics that need a lot of meaning time-space. (Recommended Read: Saif Ali Khan Reacts On Working With Sara Ali Khan, Keeping Personal-Professional Life Separately)

The trend of short films is getting a huge hype in the industry at the moment and a lot of big directors are also taking this challenge with sheer passion and commitment. We have already seen a lot of big names associated with a lot of short films in recent years and this time around, we are having the younger generation of the industry with us. Yes! We are talking about Karisma Kapoor’s daughter, Samaira Kapur, who has acted in a short film directed by Chunky Panday’s younger daughter, Rysa Panday.

On March 15, 2020, Ananya Panday’s sister, Rysa Panday has released her short film, Daud on YouTube. The short film follows the story of a young girl, who belongs to the slum community of Mumbai and wants to become a runner. Talking about the role of the 15-year-old star, Samaira Kapur, she portrays the character of one of the three runners, who help that little girl to pursue her dreams by buying her a pair of running shoes. The short film is directed pretty well by the young director, Rysa as she has kept a good check on the shot angles and characterization of every single character in the film. However, you have to applaud her for her impressive filmmaking techniques in her debut short film and no wonder she looks promising. (Don't Miss: Angad Bedi's Pictures With His 'Five GFs' Shut Trolls Targeting Wife, Neha Dhupia For Fake Feminism)

This clearly shows the popularity of short films and web series in India and the way mega stars are getting into this medium. Recently, Samaira’s mother and always pretty Karisma Kapur had made her acting comeback with the web series, Mentalhood. In this web series, Karisma is portraying the character of a modern-day mother, who is a former beauty pageant winner and is now a mother of three children. The web series focuses on the challenges that come in front of her and the way she maintains the balance in her life. Well talking about Karisma’s character in the web-series, then during the trailer launch of Mentalhood, it’s producer, Ekta Kapoor had revealed that when she went to the actress with the script, she immediately said ‘yes’ to the role. She had revealed, “Being a mother has been the most important thing for me. Like I have always said all my awards on one side and my children on the other. An entire career on one side and my kids on the other.”

In an interview with the IANS, Karisma had talked about it and had said, "It (acting) is ingrained in you. It is something that never goes away. I was waiting for something really interesting. It was out of my choice that I didn't do any film because my kids were very young. It was out of choice that I wanted to be at home with my family and children." She had further said, "They are excited that I am working again. I started working at a very young age. Everyone in my family has been an actor and contributed to this industry. I have grown up with a really strong work ethic, and I think that's hopefully gone down to my children as well."

In an interview with the DNA, Karisma had talked about motherhood and had said, "Motherhood completely changes you as a woman and your whole focus becomes your children, which I love and enjoy a lot. So I think these small initiatives which we can be a part of, which also help our children and family, means a lot. In a certain way, yes. It has altered my choices in life. Work is secondary for me as a mom. It’s all about rushing back home and being with my kids. My housemaid was just calling me (laughs). So definitely, it’s a matter of my choice and I choose to do that." (Also Read: Amrita Arora's Lovely Birthday Wish For Her 'Main Man', Shakeel Ladak Is Filled With Love And Goals)

Have you seen the short film, Daud? Let us know!