Kareena Kapoor Khan Is Worried About The Content Of Saif Ali Khan's Autobiography, Wishes To Edit It

Kareena Kapoor Khan Is Worried About The Content Of Saif Ali Khan's Autobiography, Wishes To Edit It

Kareena Kapoor Khan and Saif Ali Khan are one of the most sought-after couples of the glamour world. In a recent interview, she revealed being worried about Saif’s autobiography. 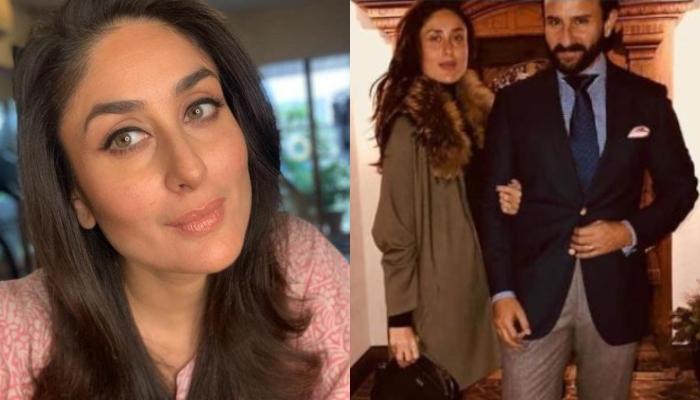 Although the year had started with a global pandemic, the month of August had come as a pleasant surprise. Kareena Kapoor Khan and Saif Ali Khan had surprised their fans with the announcement of their second pregnancy. After a few days of their pregnancy news, Saif Ali Khan had made another big announcement that he is all set to pen his life and is in the process of writing an autobiography. In a recent chat, his begum, Kareena Kapoor Khan has made a big revelation about the same. (Also Read: Kajol Shares A Picture Of Her 'Closest Clan', Gives A Glimpse Of People Who Taught Her Great Values)

Kareena Kapoor Khan and Saif Ali Khan are the most sought-after couple of the glamour world. After dating for five years, Saif and Kareena had tied the knot on October 16, 2012, and from then onward, they have been a true inspiration for all the couples. The duo had welcomed their little cotton ball, Taimur Ali Khan on December 20, 2016. Kareena Kapoor Khan is a diva, who has always inspired and motivated us. From being a loving wife to a hands-on mommy, Kareena has done complete justice to all her roles.

In a chat with film critic, Anupama Chopra, Kareena Kapoor Khan was asked about Saif Ali Khan’s autobiography and the actress quickly responded that she is really scared about the content. Talking about the same, Bebo revealed that she had asked Saif to be politically correct in his book as she knows that he ‘has no holds barred’. She further stated, “I’ve told him I am going to edit this book before you, to know what you’re going to say.”

In an interview with The Times of India, Saif Ali Khan had revealed that he is in the process of writing an autobiography, which is untitled yet and it will be out next year. Talking about the same, he had said, "So many things have changed and will be lost with time if we don’t record them. It would be nice to look back; to remember and to record. It has been funny and moving, and I must say, this is quite a selfish endeavour. I do hope others enjoy the book, too, of course!" (Also Read: Ankita Bhargava Shares A Beautiful Picture Resembling Her Mother, Says She Got It From Her Mom)

Kareena is quite active on social media, but at the same time, she is very conscious of what is published. In an interview with the Hindustan Times, Saif had revealed that he had an adorable video of Taimur which Kareena won’t let him post. Taking about the same, he had shared, “I have this amazing video of Taimur cleaning doorknobs. But she won’t let me publish it. She says she might, at some point. He’s cleaning the windows, and I say ‘what’re you doing?’ he says ‘cleaning!’. It’s very sweet.” Saif had also stated that Kareena is very concerned about Taimur and does not want to manipulate his stardom.

Some days back, Saif had virtually graced Neha Dhupia's chat show, No Filter Neha season-5, wherein he had revealed why he is not on social media and had labelled his wife, Kareena as 'Mrs Gram'. The actor had said, "Just because I’m not on social media doesn’t mean I don’t know what it is, for God’s sake. I actually was on it (Instagram) and I deleted it because I was finding it, again, I was getting irritated by toxic remarks and it’s taking too much of time and it's making me frown and I don’t want to get annoyed so literally, Ignorance is bliss. It’s like why would you want to listen to all that. My wife, on the other hand, I think she’s Miss Instagram, Mrs. Gram!" (Also Read: Sunny Leone Turns Hairstylist For Hubby, Daniel Weber But The Latter Is Scared To See The Final Look)

What is your take on Kareena's opinion? Let us know.