Kareena Kapoor's 'I Got It From My Mama' Picture Of Mom, Babita Reveals The Secret Of Her Good Looks

Kareena Kapoor's 'I Got It From My Mama' Picture Of Mom, Babita Reveals The Secret Of Her Good Looks

Kareena Kapoor Khan shares a warm bond with her mother, Babita and sister, Karisma. On July 26, 2020, she shared a throwback picture of her mom and we couldn’t stop admiring. Mothers are a blessing in disguise. Since God couldn’t reach everywhere, he made mothers. And the bond between a mother and daughter is even more special as she is her daughter’s first best friend. A daughter always looks up to her mother and aspires to be like her. Bollywood’s gorgeous actresses, Karisma Kapoor and Kareena Kapoor Khan are the perfect exemplar of the same as they share an adorable bond with their beautiful mother, Babita. They consider their mother as their pillar of strength, who has motivated them throughout their lives. (Also Read: Salman Khan Shares A Droolworthy Picture With Ahil, Nirvan And Ayat And It Just Melted Our Hearts)

It was in 1974, when Randhir Kapoor and Babita had welcomed their first child and in 1981, their family had gotten complete with the arrival of their second daughter, Kareena Kapoor. In many media interactions, Kareen Kapoor had credited her mother for giving up her career for her daughters. Bebo had also stated that it is because of the efforts of her mother that she and Lolo are a successful name in Bollywood. Babita ji was one of the top-notched actresses of her times when she had gotten married to Randhir Kapoor. She had left the glamour world to raise her kids.

On July 26, 2020, Kareena took to her IG handle and shared a beautiful throwback picture of her mother, Babita. Along with the picture, Kareena wrote, “If looks could kill... #IGotItFromMyMama.” On the picture, Kareena’s sister, Karisma Kapoor and her best friend, Amrita Arora dropped an array of heart emoticons. The gorgeous picture of Babita ji has proved that Bebo and Lolo have got their beautiful looks from their mom..

On the occasion of International Women's Day (March 8, 2020), Kareena had taken to her Instagram handle and had shared a playful picture of her mother, with her son, Taimur Ali Khan. In the picture, we could see Bebo's mother giving a cute expression to her grandson, Taimur. Along with it, she had written, "Boss. Mother. Woman. Legend. 08.03.2020." (Also Read: Janhvi Kapoor Twinned With Late Mom, Sridevi And Sister, Khushi In Kimono Proved To Be Fashionistas)

In a 2017 interview with the Hindustan Times, Kareena had called her mother, Babita 'the oxygen of her life'. She had said, "For me, my mother is like God. She is, literally, the person I pray to. She is the sunshine and oxygen in my life. She has done everything for my sister and me. She is a true woman of substance. All I know is that I can't live without my mother. The mother-child relationship is one that you can't put into words."

On April 20, 2020, Babita ji had turned 73 and to mark this special day, her daughter, Kareena Kapoor Khan had posted a throwback picture of her parents. Making the day super special, Bebo had treated her fans with an unseen picture of Randhir Kapoor and Babita and had wished her mom in the caption, which could be read as “Happy Birthday Queen” followed by heart emoticons. In the picture, we could see Randhir and Babita holding each other’s hands and it had surely reminded us of their Kal Aaj Aur Kal days.

In July 2019, the Kapoors and Pataudis had spent pure family time in London as Kareena Kapoor Khan, Saif Ali Khan and Taimur Ali Khan were joined by Karisma Kapoor, Samaira Kapoor and Kiaan Raj Kapoor on their vacation. Randhir Kapoor and Babita had later joined the kids. On July 8, 2019, Karisma had posted a sunkissed #FamJam picture with her parents, sister and kids. While Kareena and Karisma had looked super-stylish in black jacket and denim, Randhir, Babita, Samaira and Kiaan had opted for casual looks for the day. Daddy’s little girls, Kareena and Karisma could be seen holding their father's arms. (Also Read: Rahul Dev Shares A Cute Wish For Girlfriend, Mughda Godse On Her Birthday)

Well, we totally agree that Kareena has got her beautiful looks from her Mommy. What do you think? Leet us know. 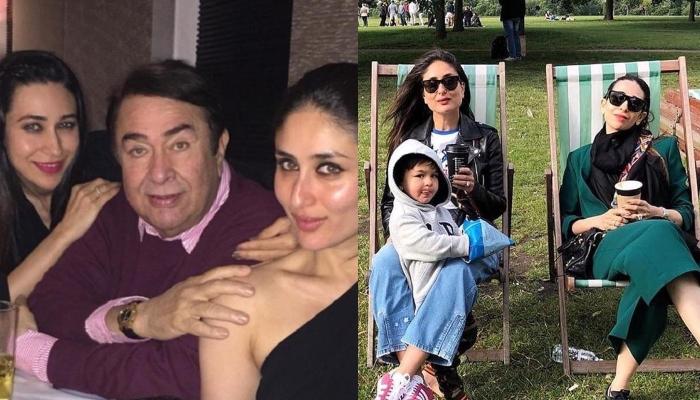 Kareena Kapoor Khan and Karisma Kapoor are amongst one of the most popular and successful celebrity sibling pairs. Having ruled the glamour world in their respective times, Bebo and Lolo, as they're fondly called, set major sister goals with their amazing chemistry. While Karisma is a little introverted, Kareena is