Kareena Kapoor Khan is spotted with her husband, Saif Ali Khan and her son, Taimur Ali Khan and we are confused if we should focus on Kareena's pregnancy glow or little Tim's chit-chat with the paps!

Kareena Kapoor Khan turns heads and lights up the room, wherever she goes. And ever since the actress is expecting her second child, her every outing becomes the talk of the town. Every expecting mother certainly waits for Kareena to step out so that they can take major fashion inspiration from her. And when her baby boy, Taimur Ali Khan and hubby, Saif Ali Khan joins her, it becomes a treat for their fans. We love Taimur and his little conversations with the paps and we got a glimpse of the same again. (Also Read: Gauahar Khan Gets A Surprise From Her 'Sasural' And Hubby-To-Be, Zaid Darbar A Day Before Wedding)

It was on December 20, 2016, when Saif Ali Khan and Kareena Kapoor Khan had welcomed the little prince of Pataudi khandan, Taimur Ali Khan into their lives. His chubby red cheeks and blue eyes still make netizens drool over his cuteness. He is still considered as one of the most gorgeous kids in the industry, thanks to his genes. After almost four years of Taimur’s birth, in the month of August 2020, Saif and Kareena had announced the news of expecting baby number 2 with an official statement. It could be read as "We are very pleased to announce that we are expecting an addition to our family!! Thank you to all our well-wishers for all their love and support.” The family has become our source of inspiration!

Kareena Kapoor Khan is spotted with her husband, Saif Ali Khan and her baby boy, Taimur Ali Khan and we are confused if we should focus on Kareena’s pregnancy glow or little Tim’s chit-chat with the paps. Kareena was spotted in the city with her family and we are bowled by her pregnancy glow and baby bump. Kareena can be seen wearing a multi-coloured digital print maxi dress, flaunting her baby bump. The dress accentuated her pregnancy glow even more. She was accompanied by her husband, Saif Ali Khan, who chose a purple t-shirt and grey shorts and her son, Taimur Ali Khan, who wore a red ganji and navy blue pants. In the video, Taimur can be seen waving and saying hello to the paps. Take a look at the video:

Kareena has been working since the lockdown has been lifted and the shooting has been resumed. It is a delight for her fans when the paps capture her in and around the city as her baby bump and pregnancy glow is making it hard for anyone to ignore her. A few days back, Kareena was shooting for an ad campaign and the actress had shared a glimpse of it. Taking to her IG handle, Kareena had shared a selfie, where she could be seen wearing a pink bralette from the brand, Puma, flaunting her baby bump, while holding it with her one hand. Kareena had looked alluring in the picture and had captioned it as “Two of us on the sets of @pumaindia.” Other than this, Kareena had shared a picture of her complete look on her IG stories which was shared by the clothing brand. In the picture, Kareena could be seen wearing a pink coordinate set and had captioned it as "Captured here: Not one, but two of our #PUMAFam." (Don't Miss: Yuzvendra Chahal And Dhanashree Verma's Two-Tier Engagement Cake Has A Unique Hashtag Topper) 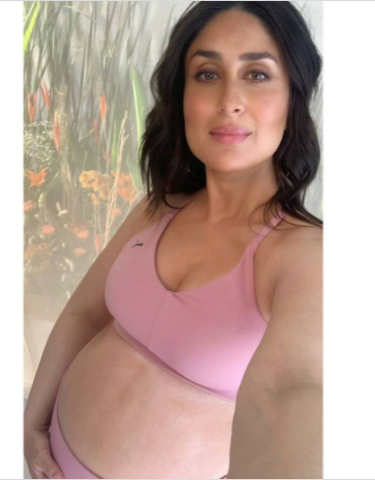 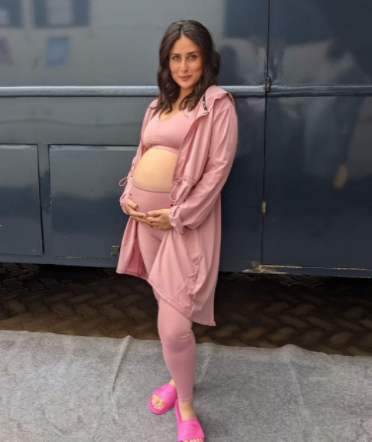 Kareena’s love for Kaftan is a known fact as she had worn Kaftans throughout the lockdown and has been making her maternity fashion comfortable in them. Kareena Kapoor Khan has entered her last trimester and was spotted wearing a green floral Kaftan with a zebra print belt a few days back. The actress was seen flaunting her baby bump in the Kaftan as she was out to meet her elder sister, Karisma Kapoor. The actress had posed for the paparazzi outside her sister’s building, oozing ‘Poo’ vibes and looking gorgeous with her baby bump. (Recommended Read: Gauahar Khan Holds Zaid Darbar's Hand Forever, Worries About Their Kids' Hands For This Reason) 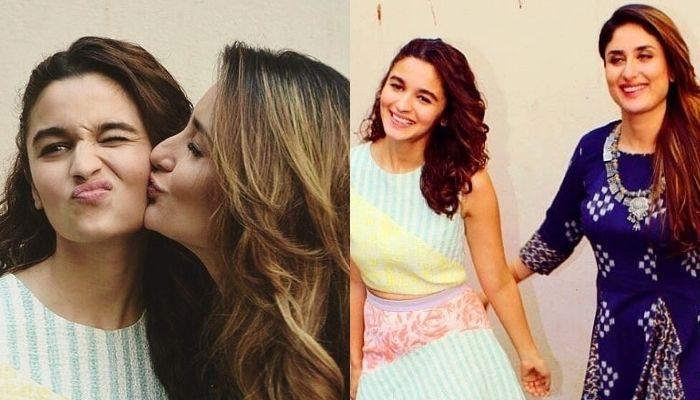