Ahead of their wedding, Gauahar Khan and Zaid Darbar got their hands' impression framed. The actress is worried about her kids' hands for this reason. Details inside!

Gauahar Khan and Zaid Darbar’s wedding tale is finally going to reach its ultimate destination, i.e, wedding on December 25, 2020, and the couple is doing everything to make it memorable. Gauahar Khan’s relationship with Zaid Darbar had garnered everyone's attention on September 3, 2020, when we had gotten a glimpse of them dancing on Neha Kakkar's song, Diamond Da Challa. While their chemistry had swooned their fans, towards the end, everyone had rejoiced as Zaid had gone down on his knees and had slid a ring on Gauahar's finger. (Also Read: Yuzvendra Chahal And Dhanashree Verma's Two-Tier Engagement Cake Has A Unique Hashtag Topper)

After months of rumours, Gauahar and Zaid had accepted their relationship and had later announced that the two are ready to tie the knot on December 25, 2020. Since then, it is all about #Gaza and #GAZAbkahaidin in their lives. The couple had revealed their love story with a cutesy video on their respective IG handles on December 19, 2020. The animated caricature video of their love story had made its place into our hearts and it had given us the vibe of the fun and bubbly relationship the couple shares! The video had narrated how the lockdown had worked for them as that was the time when a chance encounter had started their 'happily-ever-after' story and rest, as they say, is history. Sharing the video, Gauahar had written, "Jab we Met @zaid_darbar #6daystogo #GazabKaHaiDin."

Gauahar Khan Gets A Surprise From Her 'Sasural' And Hubby-To-Be, Zaid Darbar A Day Before Wedding

Gauahar Khan Twins With Her 'Saasu Maa', Farzana In The Shades Of Green, Pens Birthday Wish For Her

Gauahar Khan Wears Sister, Nigaar's Clothes Made By Her Saasu-Maa For An Outing With Hubby, Zaid

As the D-day for Gauahar Khan and Zaid Darbar is approaching, the wedding festivities have already begun and amidst them, the couple has finally held each other’s hand. Yes, Gauahar and Zaid have got their hands impressions cast by none-other-than the famous artist, Bhavna Sarja. Taking to her IG handle, Gauahar shared pictures of the couple’s hand impression and one with the artist. As Gauahar is quite worried about her hands and thinks they are fat, this has also made her worried about her future kids’ hands and wants them to have beautiful hands like their father. Sharing the picture, Gauahar wrote, “Thank you my dearest @bhavnajasra immortalising our love forever! This will always be most special and you will always be remembered very fondly by us #Myfathands hahahah, @zaid_darbar hoping our kids get your beautiful hands, hahah!” Take a look: 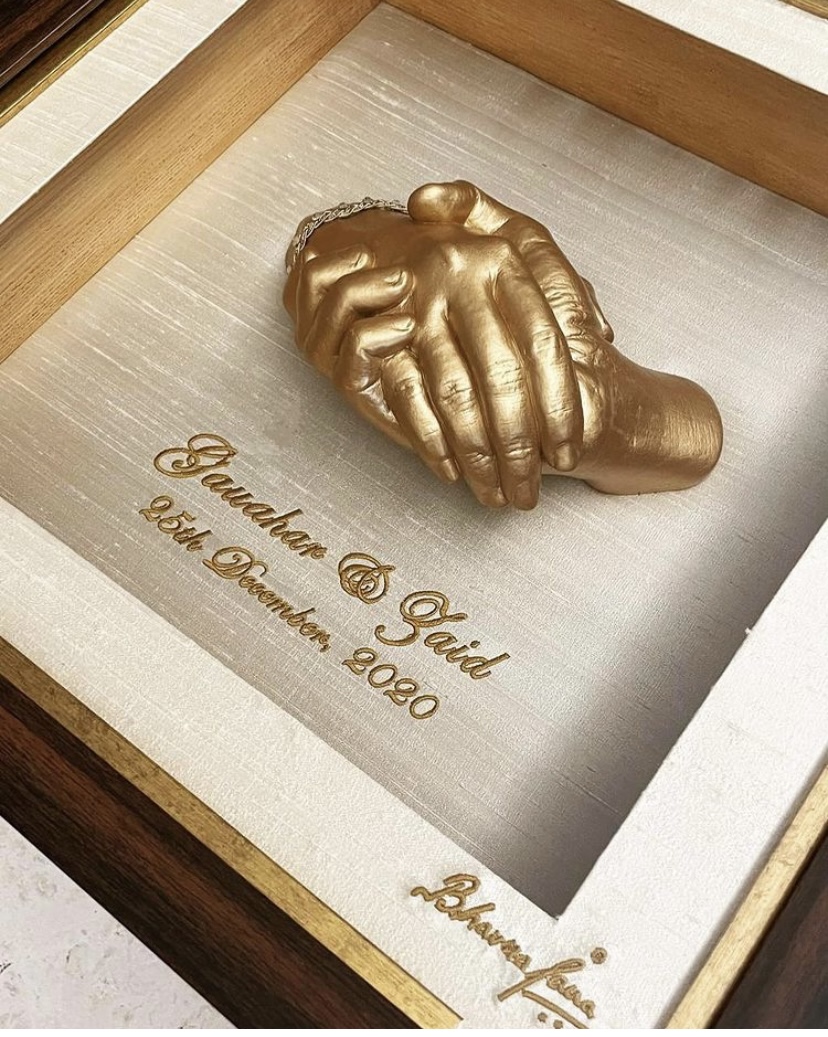 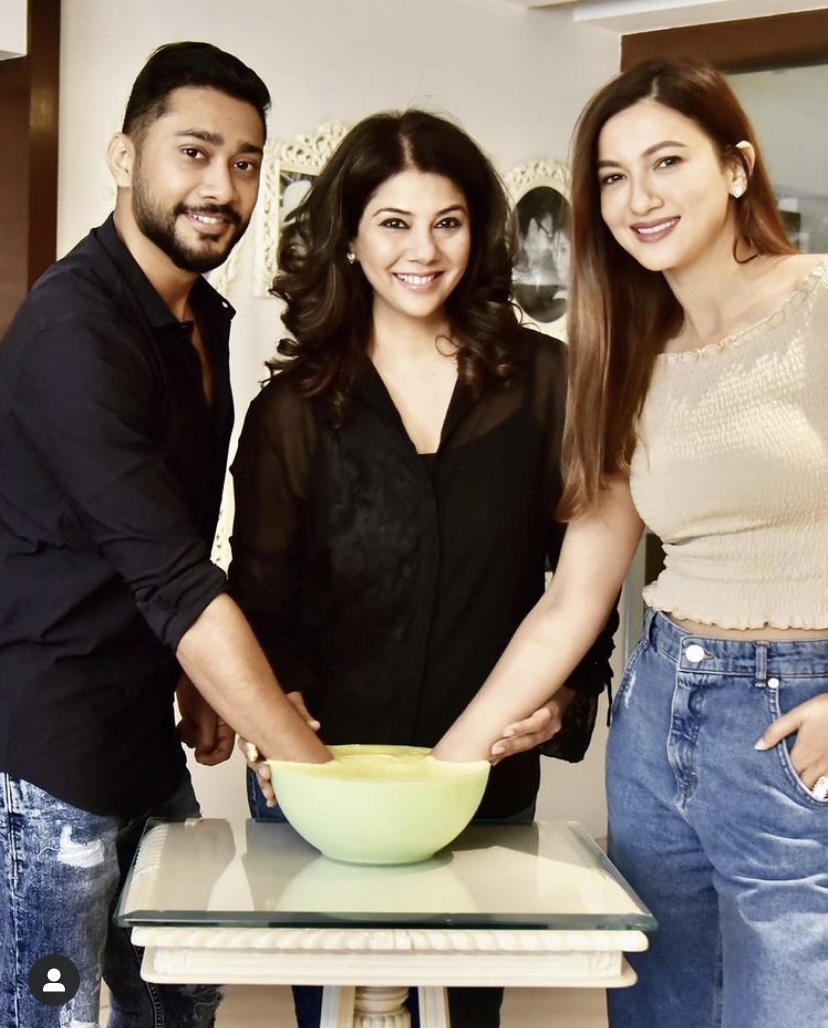 A few days back, social media was abuzz with Gauahar and Zaid’s wedding festivities and the videos making it to the web had taken our hearts away. We had gotten hold of a video, wherein, Gauahar and Zaid could be seen dancing with their family on dhol and Gauahar’s mother had gotten emotional, watching her daughter turn a bride. The mother and daughter had ended up hugging and it had made us emotional too, seeing the mother-daughter love. Other than this, throughout the festivity, 'Gaza' could be seen dancing on the dhol. Even the couple had made the entry at the venue together, twinning in yellow and it was Gauahar’s sister, Nigaar, who had made the couple dance on the dhol. (Recommended Read: Dimpy Ganguly Takes Her Son, Aryaan To The Hills For The First Time, He Reacted Like This [Video])

On December 21, 2020, Gauahar and Zaid's wedding festivities had kick-started with their Chiksa function. Gauahar had taken to her Instagram handle to share two lovely pictures from the ceremony. In the pictures, we could see Gauahar looking gorgeous in a yellow lehenga and her look was completed with a floral maang teeka. On the other hand, Zaid had looked dapper in a yellow kurta. Alongside it, she had written, "When half of me met half of you and together the better halves shaped our beautiful moments. #Allahmdulillah. Day 1 of #GaZa celebrations - Chiksa." (Don't Miss: Sonam Kapoor, Rhea Kapoor, Karan Boolani Pen Adorable Wishes For Anil Kapoor On His 64th Birthday) 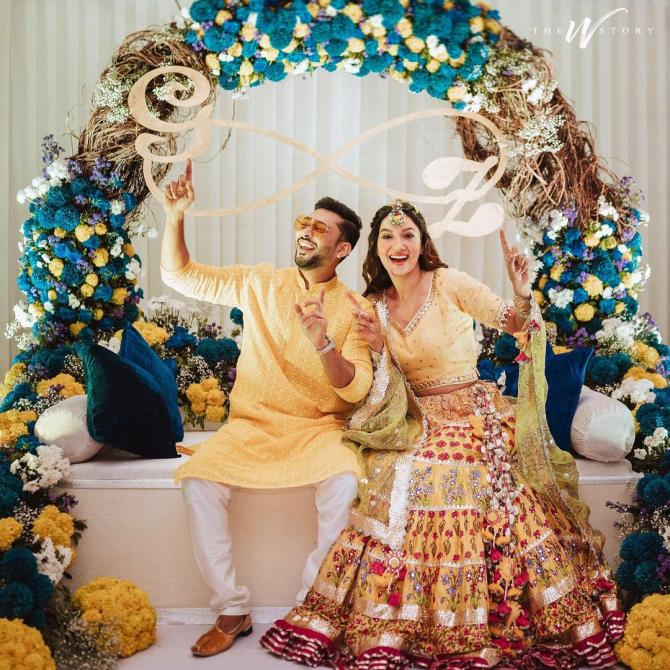 Isn’t it a great way to make your love and wedding immortal? 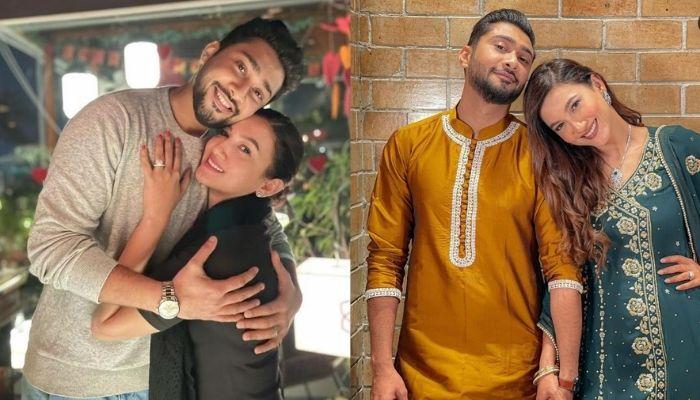 Gauahar Khan and Zaid Darbar had a ‘chatt mangni, patt byaah’ as their chance encounter during the lockdown 2020 had started their forever journey. It was on November 5, 2020, when Gauahar and Zaid had confirmed their relationship and on December 25, 2020, the two had tied the knot by

Gauahar Khan Gets A Surprise From Her 'Sasural' And Hubby-To-Be, Zaid Darbar A Day Before Wedding