Kareena Kapoor Khan and Karisma Kapoor went on a lunch date with their mother, Babita Kapoor. The trio made their Monday marvellous! This awesome trio's lunch date pic is going viral on social media. 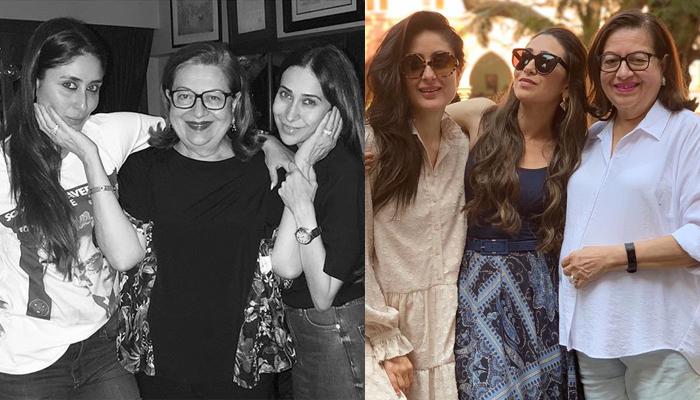 Bollywood is a place not just about the glamour, glitz and box-office. Beyond the showbiz, the Tinseltown is also an inspiration for many of us. Bollywood has given us many inspiring figures who have struggled hard to make a name for themselves. And among them, are many who are quite underrated or whose strong personalities don't get enough recognition. One such Bollywood celebrity is Babita aka Babita Kapoor (formerly, Babita Shivdasani). (Also Read: Taimur Ali Khan's Favourite Game Is Saying 'Khichik Khichik' Pretending To Be 'Mediawale')

Kareena Kapoor Khan and Karisma Kapoor's mother, Babita ji is a super-woman who has raised her daughters like a true warrior. Babita ji was married to Randhir Kapoor from 1971 through 1981, and but then they got separated. They aren't legally divorced yet and continue to share an amicable bond with each other. Babita ji raised their daughters, Bebo and Lolo on her own terms without anyone's support, and look where this awesome sibling-duo is today!

Kareena and Karisma share a friendly bond with Babita ji and their latest social media picture is proof of the same. Kareena Kapoor Khan and Karisma Kapoor went on a lunch date with their mother, Babita ji and this awesome trio looked like the happiest coterie in the world. Karisma shared the following picture from the same, and adorably captioned it as, "Monday made marvellous with my mains! #family." Take a look at Kareena Kapoor Khan, Karisma Kapoor and Babita Kapoor's lunch date picture:

Karisma, Kareena and Babita together make for the most adorable trio of Bollywood, right? The two have always spoken reverently of their mother. In fact, in a 2017 interview, Kareena Kapoor Khan had called Babita Kapoor 'the oxygen of her life'. She was quoted as saying, "For me, my mother is like God. She is, literally, the person I pray to. She is the sunshine and oxygen in my life. She has done everything for my sister and me. She is a true woman of substance. All I know is that I can't live without my mother. The mother-child relationship is one that you can't put into words."

Babita Kapoor recently celebrated her 72nd birthday on April 20, 2019. Karisma Kapoor had taken to her Instagram handle and had shared an adorable birthday wish for her mom. Posting the following picture of Babita ji from her yesteryears as an actress, Karisma had written, "Happy Birthday Mom. We love you the most. Thank you for always reminding me that our fans are most precious. Back in the day, actors would personally autograph pictures of themselves and send it as a reply to all their fan letters. It was a personal gesture to reciprocate the love and blessings that were sent via fan mail. Non digital age #happybirthday #family #mom." (Suggested Read: Sonam K Ahuja, Rani Mukerji, Juhi Chawla Have To Say This About Their Mothers-In-Law To Vidya Balan)

Kareena and Karisma also share a sisterly-love which is unmatched. In a throwback interview, Kareena had said, "Lolo (Karisma) helps me with my homework. Mama's strict about studies. But Lolo is even stricter. She even spanks me sometimes when I am naughty. But that is because she loves me."

Karisma Kapoor is 6 years older than Kareena Kapoor Khan. Recalling their childhood days, Kareena had shared how Karisma used to bully her little sister. Bebo had revealed, "She’s my older sister, but I think I kind of bully her sometimes. I fire her, and I also give her advice. But eventually, she’s the person I have grown up aspiring to be. Even the way she conducted herself back in the ’90s — she was a very private actor — was inspiring."

She had further added, "Her simplicity is her beauty and charm. That’s why, all her life, everyone around her has bullied her. But everyone who is a part of my life knows that if Lolo (Karisma’s pet name) has said something, then it’s like gospel truth for me. And what I admire the most is the dignity with which she has conducted her life, her career, and single-handedly brought up her children, despite a lot of media stress, in terms of her marriage."

Coming back to Babita Kapoor, she has been living like a single mom of 2 kids since 1981. In an interview, Randhir Kapoor was asked why he never divorced Babita ji. To this, he had replied, "Divorce for what? Why should we head for divorce? I don’t intend to get married again, and nor does she. She found that I was a terrible man who drank a lot and came home late, which was something she didn’t like. And I didn’t want to live the way she wanted, and she couldn’t accept me as I am, though it was a love marriage. So it’s okay. We had two lovely children to look after. She brought them up in the best way and they have excelled in their career. What else I could have asked for as a father?" (You May Like: Isha Ambani Piramal Steals The Show Wearing A Feather Gown And Chunky Diamonds At Met Gala 2019)