Kareena Kapoor Khan has shared a family picture from their recent trip to Dharamshala, shares a glimpse of her and Tim’s favourite sneakers. Check out the picture inside! Taimur Ali Khan has been India’s most favourite star kid ever since his birth. The moment his first picture had hit the internet, the nation had gone berserk and people could not help, but drool over his gorgeousness. It is obvious that he has got the best genes of both his parents, Kareena Kapoor Khan and Saif Ali Khan. It was on December 20, 2016, when the Pataudi palace had welcomed a little prince and his red chubby cheeks and grey eyes, still make our hearts go aww. (Also Read: Shaheer Sheikh Shares A Picture Of Wife, Ruchikaa Kapoor, Plans To Reveal Their Love Story Soon)

Taimur Ali Khan is soon going to become an elder brother as Kareena is expecting her second child. It was on August 12, 2020, when Kareena and Saif had released an official statement announcing that their soon-to-be 4-year-old son, Taimur is going to be a big brother. The couple had confirmed the news of their second pregnancy and had stated that they were pleased to announce that they are expecting an addition to their family and had thanked their well-wishers for all their love and support. Kareena has been sharing glimpses of her second pregnancy and her fans have been drooling over them. Now, Kareena has shared a glimpse of her and Tim’s favourite sneakers from their recent trip to Dharamshala.

Kareena Kapoor Khan was in Dharamshala with her husband, Saif Ali Khan and son, Taimur Ali Khan to celebrate Diwali. The family was joined by Bebo’s BFF, Malaika Arora Khan and her beau, Arjun Kapoor. We were blessed with numerous pictures and videos from their happy stay in Dharamshala and now, Kareena has shared another picture from their vacation. Kareena shared a family picture, consisting of her, Saif and Taimur and revealed that she and Taimur are wearing their favourite sneakers. Sharing the picture on her IG stories, Kareena wrote, “I love my Puma green sneakers and so does Tim @pumaindia.” Take a look:

As we mentioned, Kareena Kapoor Khan, Saif Ali Khan and Taimur Ali Khan had celebrated the festival of Diwali in Dharamshala with their friends, Arjun Kapoor and Malaika Arora. Kareena had shared a glimpse of her intimate Diwali celebration with Saif and Taimur in the chilly winter night at Dharamshala, enjoying the bonfire. Twinning with baby Tim in white, Bebo had flaunted her baby bump in the Boomerang by beautifully caressing it while Saif was all smiles for the camera. Kareena had captioned the post as “Happy Diwali to everyone... stay safe, stay happy.” (Recommended Read: 'Ishqbaaaz' Fame, Nakuul Mehta Grooved With Wife, Jankee On A Romantic Song On Her Godh Bharai Rasam)

A few days ago, Kareena Kapoor Khan had given a glimpse of Taimur Ali Khan's pottery session in Dharmkot studio. The mommy-son duo could be seen busy in learning pottery, as Taimur had gleamed with joy. Kareena Kapoor Khan had radiated pregnancy glow in a red and black pullover while little Taimur had looked like a cutie in a grey sweatshirt. Amma, Kareena Kapoor Khan could be seen admiring her little goofball as he had tried his hands at pottery. Kareena had posted several pictures, and a video on her IG handle with the caption, "Pot, pot, pottery with the lil man. Dharamkot studio such brilliant stuff."

Taimur is soon going to be 4 years old and a video had proved that he is sure hell excited for his birthday. Scrolling through our social media feed, we had stumbled upon an unseen video of Tim, where he could be seen singing a birthday song with happiness and zeal. In the video, Taimur could be seen sitting and singing the birthday song with his parents, Saif Ali Khan and Kareena Kapoor Khan as one of their staffers had cut his birthday cake. Taimur’s pitch had gone high in between, and then Saif had reminded him to sing nicely and the loving son had followed his father’s instructions. (Don't Miss: Puja Banerjee And Kunal Verma Host A Grand 'Naamkaran Sanskar' For Their Baby Boy [Videos Inside]) 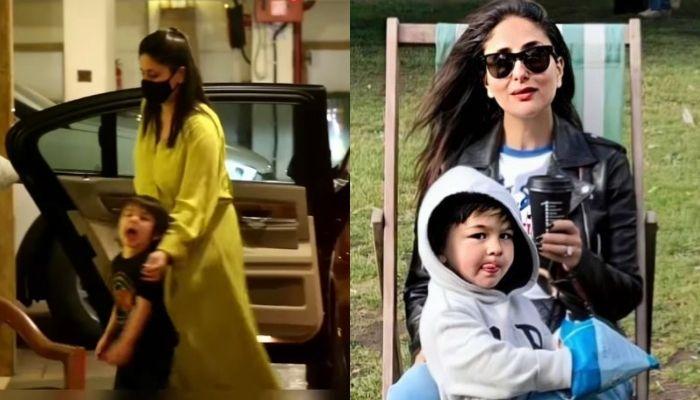 When a couple conceives a baby for the second time, they are not only happy about the advancement in their life but also worry about their first child. It usually happens that the first child gets used to all the attention and love and thus, it could break his or