Bollywood actress, Kareena Kapoor Khan is enjoying playing dress-up in her second pregnancy. Check out her gorgeous look that will inspire all the moms-to-be!

The moment a couple ties the knot, everyone they know start asking them the much awaited question, 'Good news kab de rahe ho?' More than the couple, the entire world eagerly waits for the little bundle of joy. However, after the birth of their first baby, the entire family wants to know when they are going to welcome another baby. And Bollywood actress, Kareena Kapoor Khan has often faced such questions by media and her fans. (Recommend Read: Janhvi Kapoor Looks Like A Mirror Image Of Her Late Mother, Sridevi Kapoor In Red Saree And Bindi)

Last month, in August, Kareena Kapoor Khan and Saif Ali Khan had announced their pregnancy news. The family of 'three are soon going to be four' as Kareena and Saif are expecting their second child in 2021. On August 12, 2020, Kareena and Saif had confirmed the news of the former's pregnancy, and had released an official statement regarding the same, which could be read as "We are very pleased to announce that we are expecting an addition to our family!! Thank you to all our well-wishers for all their love and support. Saif and Kareena." 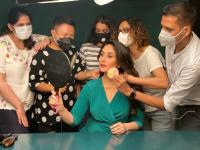 On September 20, 2020, we spotted Kareena out and about in the city and looking gorgeous as ever. The actress donned an all-white ensemble with a matching mask and hair tied at the back. Kareena radiated pregnancy glow and we can see her cute baby bump. Check out as she waves at the paparazzi:

In an interview with Anupama Chopra, Kareena Kapoor Khan had opened up on her second pregnancy. She had shared that she wants to stay healthy in her second pregnancy, "Last time, I just took myself for granted and became huge. I put on 25 Kgs. I don't want to do that. I just want to be healthy and fit. I think the first time, it's just excitement. Everyone's like parathe khao, ghee khao, doodh piyo, besan ka laddoos are coming. And now, I'm like listen I have done it before, I know what my body requires. My doctor's like 'listen you are not eating for two, that is just a myth. Just be healthy and be safe.' And that is what I am trying to do." (Also Read: Ranbir Kapoor's WhatsApp DP Has A Special Picture Of The Most Important People In His Life) 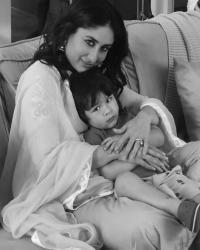 In the same interview, Kareena had talked about Taimur's thought on being 'bhaiya' and whether he is excited to welcome his little sibling. The actress had stated, “He is figuring out things. He is very ahead of his age. We never treated him like a kid. We treated him like an equal and adult. He is very friendly; a giving boy and I think he is ready.” (Don't Miss: Taimur Ali Khan Performs Cute 'Bhangra' As He Visits 'Naani', Babita's House With Mommy, Kareena)