Every girl wants to look like her mother and Bollywood actress, Janhvi Kapoor is no different. This picture proves that Janhvi Kapoor looks exactly like her late mother, Sridevi. Find out!

Every girl grows up watching her mother draped in the beautiful six yard long cloth around her body and making the saree look more gorgeous. From childhood, every girl begins her saree draping experience by draping a dupatta around her waist. And this experience turns into reality when she first gets to wear a saree on her school farewell. The very first thought she has is, whether she is looking as surreal as her mother in a saree. Late actress, Sridevi’s daughter, Janhvi Kapoor too must have been through the same emotions through her childhood as often we spot her wearing her mother’s saree or dressing up like her. (Also Read: Hrithik Roshan And Sussanne Khan's Unseen Wedding Video Includes Their Jaimala And Sindoor Moment)

It was not long back, when we had got hold of a throwback picture of Janhvi, Khushi and their late mom, Sridevi, wearing South-Indian sarees. In the picture, we could see Janhvi and Khushi twinning with each other in a purple hued saree, holding their mommy, Sridevi’s hand, who could be seen looking ethereal in a maroon-coloured saree. The Kapoor sisters had looked super cute in the matching attire. While Janhvi and Khushi had teamed similar sort of earrings with their saree look, their mommy, Sridevi could be seen wearing a royal diamond choker necklace. Both, Janhvi and Khushi had held on to their mother tight, while being snapped.

Now, we have got a hold on another ethereal picture of Sridevi and Janhvi Kapoor, which is a collage made by a fan page. The collage is a close-up shot of both Janhvi and Sridevi, and they both personify beauty. On the left hand side, we can see Janhvi’s picture, clad in red sequin saree with a deep V-neck blouse. She had accentuated her look with bold red lipstick and bindi. Whereas, on the right hand side, we can see, Sridevi in a plain red georgette saree with a V-neck blouse. She had opted for silver junk jewellery to work her look and had added red bindi and lipstick to it. The picture proved that Janhvi is a mirror image of her mother, Sridevi. Take a look:

Janhvi is often spotted wearing her mother’s saree and dupattas. On National Handloom Day 2020, which is celebrated to salute whoever is associated with handloom and handicrafts sector, Janhvi Kapoor had posted a picture of herself, wearing her mother, Sridevi's saree. Sharing a picture in her most favourite and special handloom saree, Janhvi had captioned the post as "Today is National Handloom Day! This is my most favourite and most special handloom saree. The weavers and artisans in our country are truly unmatched in skill and creativity- the best in the world! #vocal4handmade @pmoindia @narendramodi @smritiiraniofficial @ministryoftextilesgoi." (Don't Miss: Shah Rukh Khan's Kids, Aryan And Suhana Look Sleepy In Their Unseen Childhood Video From An Event)

Janhvi Kapoor had donned her mother’s beautiful saree and had looked as pretty as her, at the 65th National Film Awards. Sridevi had worn a pink and white kanjeevaram saree at actor, Ram Charan's wedding in 2013. Even though with some minor changes in the saree, Janhvi had proved that she is the reflection of her mother. While originally Sridevi had worn this saree with a sleeveless blouse, and matching necklace and earrings, her daughter, Janhvi had opted for cropped sleeves blouse and had kept her look simple with just a pair of jhumkas.

Janhvi Kapoor holds her late mother, Sridevi close to her heart and also remind us of her with her sartorial picks time and again. In 2018, a few months after Sridevi’s demise, Janhvi had graced her mother’s old dupatta and had worn it exactly like her. Janhvi had styled the beautiful rose printed pink dupatta with a solid white kurta, just like her mother. Like mother, like daughter, we say! It had surely touched our nostalgic chords right, and Janhvi continuing her mother’s legacy had left us all teary-eyed. (Recommended Read: Shilpa Shetty Kundra Reveals How Her Hubby, Raj Kundra Had Proposed Her In This Throwback Video) 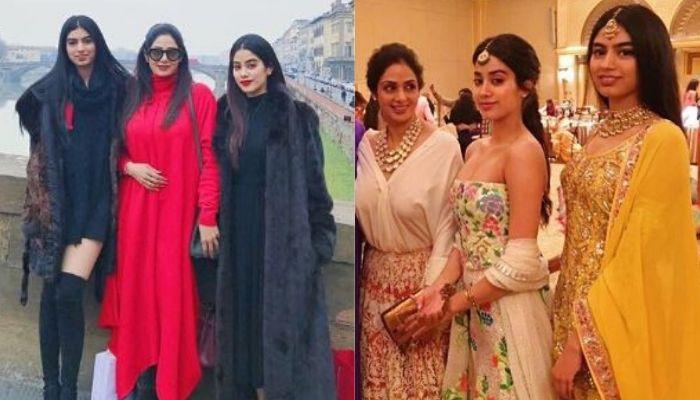 Every girl’s first encounter with fashion is through her mother’s wardrobe. It is considered to be a mother’s job to buy clothes and doll up their little girls when they are a kid and then and there we start to learn the tips and tricks of fashion. From learning to