10 Times Kareena Kapoor Proved That She Isn't Just A Diva, But A Super-Mom Whose Priority Is Family

10 Times Kareena Kapoor Proved That She Isn't Just A Diva, But A Super-Mom Whose Priority Is Family

She is a star, a wife, a sister, a daughter and a mother. Kareena Kapoor Khan has set a perfect example of prioritising her work and family. 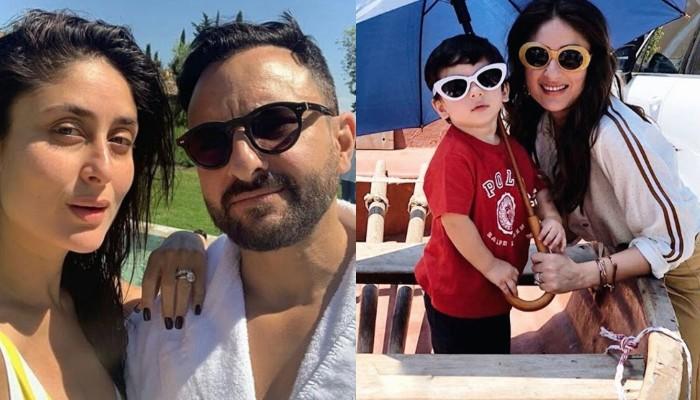 “Ye Kaun Hai Jisne Mud Ke Mujhe Nahi Dekha”. Kareena Kapoor Khan, the diva of Bollywood or the Begum of Pataudi, has always managed to surprise her audiences with either her performances or her fitness goals. From taking challenging roles in movies like Chameli, Omkara and Udta Punjab to turning into size zero, she has done it all.

Not only is she a versatile actress but is also one of the few actors who have been up and honest about her personal life and relationships. Whether it is her breakup, marriage or even pregnancy, she has never shied away from baring it all. The ‘Mai apni favourite hoon’ Poo, has always maintained that she is just not a diva but is also a doting mother and a lovely wife, too who know exactly knows how to balance her professional as well as personal life. Let us take a look at her transition. 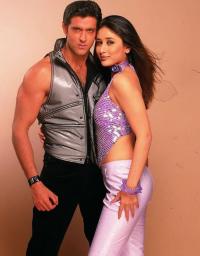 The ultimate fashion icon who is known for her style statements had once said that she “can make jeans and a T-shirt also look like couture.” Her style has inspired millions around the world. Whether her crop tops in Kabhi Khushi Kabhi Gham or her size-zero look in Tashan, almost every time the star has managed to surprise her audience. With every film of hers, a new trend is born. Not only this, the Jab We Met actress who is known for her brutal and sharp wit has always been blunt with her opinions.

#2. Falling In Love With Saif 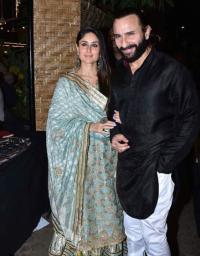 Even with an age gap of 10 years, Kareena could not stop herself from falling in love with the charmer, Saif Ali Khan. They are surely the most sought-after couple of Bollywood. The Nawab has always stood by her side and has always guided her in her professional decisions. Saif first met Kareena when she was a young girl who accompanied her sister, Karisma Kapoor on her set. And later it was on the sets of Tashan, that Saif and Kareena fell in love. She remembers the time when Saif proposed her in Greece. Kareena, in an interview, had once said:

“I unabashedly wore my heart on my sleeve and it was a nice ride till I finally met Saif and we fell in love.” 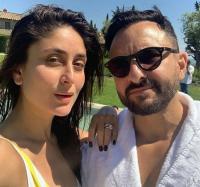 She believes that they are totally different from each other, but it was Saif who had taught her to strike a balance in life and never let things affect her. Kareena had once stated that whenever she felt that she was falling in life, Saif came for her rescue. She also remembers going on long rides with Saif during the shooting of Tashan just to spend quality time with each other. She said:

#3. Being An Ideal Wife To Saif 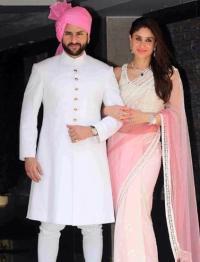 Saif feels that Kareena has always managed to bring the good in him. She, according to him, is somebody for whom her family comes first. Saif said that Kareena is very much driven to her family and goes to any extent to be with them. He also said that Kareena is a very possessive mother which irks him sometimes and he asked her to give Taimur his space. Saif also feels that marrying Kareena was the best decision of his life. Talking about the same, the actor said:

“When two actors are in a relationship, no matter what the intention is, there is a great deal of uncertainty. Our wedding resolved that. For me, it is very important to feel calm about the person I am with, and not distracted or worried. If one is happy at home, it shows on one's face, and in one's work. Kareena has made me feel secure about our relationship, so I am happy being with her.”

Recommended Read: Isha Was Her 'Daadu' Dhirubhai Ambani's Favourite, There's One Thing He Would Never Forget For Her

#4. A Doting Mother To Taimur 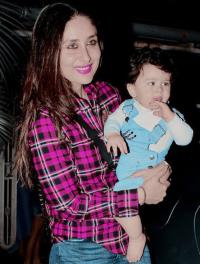 Kareena Kapoor Khan welcomed her baby Taimur Ali Khan in 2016. The moment his first picture was out, little Taimur became a huge internet sensation overnight. Kareena once said that Taimur is the most special thing happened to her. Kareena said that Taimur is used to the media attention he gets. Initially, the constant media glare made him a bit reluctant but with the passage of time, he is used to it. She stated:

“Both me and Saif always wanted this. We used to talk about all these things. Both of us see ourselves in Taimur, and this is the most special thing.”

Sharing her thoughts on motherhood, Kareena once said:

“There are a lot of responsibilities on you once you become a mother. You feel that your heart is not beating inside you, but outside your body, and that is the biggest responsibility.” 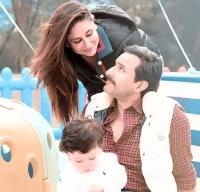 The Omkara actress who made a comeback with the film Veere Di Wedding, post her delivery, believes that her priorities have changed and that she now has a family and a son to look after. The actress said she never thought that she could manage both work and family but with the passage of time, she has managed to prioritise both. In an interview with the Hindustan Times, Kareena said:

“Of course, they (priorities) have! I have a son, a family and responsibility on my shoulders, so I’ll choose to do one film at a time because I need time for them. And since, it’s just one, I’d want to do something good and interesting and it’ll be the one I choose rather than doing something for a friend or anything.” 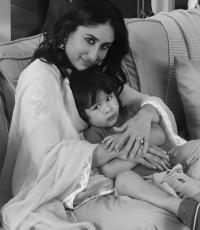 The actress often takes her son Taimur to her shoots. Sometime back, when during one of her shoots, a lovely pic (above) was surfaced on the internet which soon made her fans go bonkers. The actress who juggles between work and family said that she loved spending time with her son and this was the reason Taimur often accompanies her. Talking about spending her time with Taimur, Kareena once said:

“My time with my son- because it’s not on social media or no one knows about it- does not need to be (made public). Just because I don’t post a picture with him or I don’t carry him at airports doesn’t mean I don’t spend time with my son.”

Recommended Read: 17 Yummy Mummies of Bollywood And Their Adorable Kids Who Make For a Picture-Perfect Pair 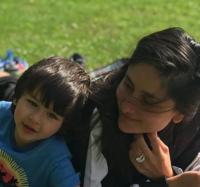 Kareena who was recently in London for the shoot of her upcoming film, Angrezi Medium is also judging a reality show, Dance India Dance. Kareena was accompanied by her family who was there to celebrate Saif Ali Khan’s birthday. During her shooting in London, the Udta Punjab actress used to fly down to Mumbai to shoot for the show (Dance India Dance) and take a flight back to London the same day, to be with Taimur and Saif. 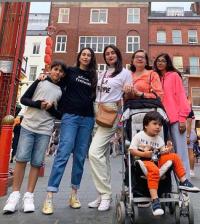 Kareena says motherhood comes with a lot of responsibilities, but the whole feeling of being with your child makes it very simple. When asked on how she manages the pressure, she had said: 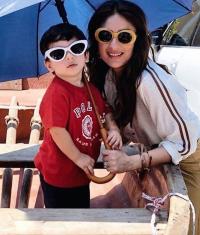 Kareena admits that she pampers Taimur a lot and it annoys her husband, Saif. The actress said that Saif always tells her that Taimur doesn’t need to be the centre of her world all the time and should be given his own space. About parenting, she said that she is still learning it and was quoted as saying:

“I am still learning the ropes. In fact, Saif says my attention has completely shifted to Taimur and keeps complaining about it. I told him, “Maybe that will be the case for a while."” 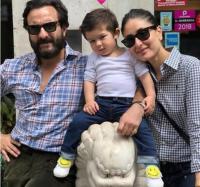 In a recent interview with the Hindustan Times, Kareena revealed how she loves imitating Taimur and said:

#9. Motherhood Being Her Biggest Blessing 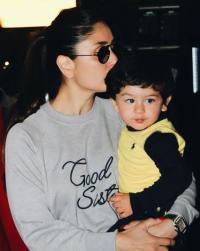 Kareena says that motherhood has surely been the biggest blessing in her life. She also revealed one of the sweetest things that her darling son says when she leaves for work and it surely broke our heart. She said:

"He says the sweetest thing every day when I have to go to work. 'Amma, don't go.' It just breaks your heart. Sometimes, I just have to slip out without saying bye to him." 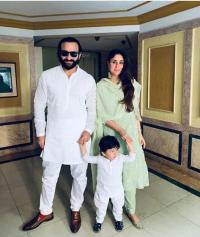 Kareena further revealed how she loves it when Taimur calls her ‘amma’. Talking about the same she had said:

"He can call me whatever he wants. But it's just that Saif and his siblings called their mother (Sharmila Tagore) 'Amma' and their father (Mansoor Ali Khan Pataudi) 'Abba', so it's just like a thing now."

#10. Sharing A Close Bond With Sara And Ibrahim 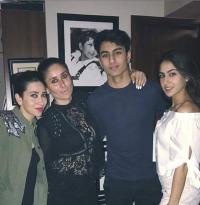 The Jab We Met actress shares a very special bond with Sara Ali Khan and Ibrahim Ali Khan, Saif’s children from his previous marriage with Amrita Singh. Kareena was seen praising Sara, calling her extremely talented. She described it by saying that Sara "has it in her genes" and will "rock the industry" with her "beauty and talent".

Kareena Kapoor had shared an incident when Sara once came to meet her on the trial of Kabhi Khushi Kabhi Gham. Talking about the same, she said:

At the trial of Kabhi Khushi Kabhie Gham, "Sara came dressed in ‘You Are My Sonia’ outfit with Amrita (Singh) wanting to meet me because she was a huge fan.” 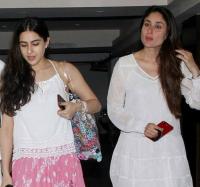 Kareena has surely shown us that being a star would never stop her from the responsibilities of her family. With women going away from the limelight or taking a backseat after marriage or embracing motherhood, Kareena Kapoor Khan has surely set some family goals and has given the best example on how to manage work and family with equal zest. We wish Kareena Kapoor Khan a very happy birthday and best wishes for her future endeavours!

Recommended Read: Kajol Devgan And Nysa Devgan Share An Uncanny Resemblance With Each Other, Here Are The Proofs