Kareena Kapoor Khan And Kajol Talk About How They Are Bringing Up Their Sons, Yug And Taimur

Kareena Kapoor Khan And Kajol Talk About How They Are Bringing Up Their Sons, Yug And Taimur

Silver screen’s favourite sisters jodi, Kareena and Kajol came together once again for former's chat show, 'What Women Want'. The duo talked about how they are bringing up their sons, Yug and Taimur. 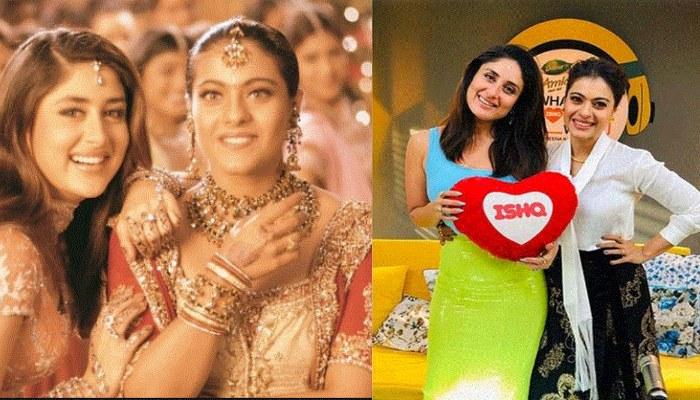 Parenting is one of the toughest jobs and requires a lot of attention and determination to provide your kid with the best of everything. Parents, each and every day, try to motivate their kid and help him/her to grow to be one of the most successful persons in the world. From the moment when a couple holds their newborn in their arms for the first time to help him/her to walk, the responsibility of a newbie parent starts. There is no such thing as a perfect parent, they learn every detail through the process and understanding. Parenting is not easy; you sometimes have to dig deep into your kids’ hearts to understand him/her. (Recommended Read: 'Chhapak' Star, Vikrant Massey All Set To Tie The Knot With Ladylove, Sheetal Thakur In 2020)

When Kabhi Khushi Kabhie Gham had released in the year 2001, we were smitten by the chemistry of two sisters, Pooja and Anjali played by Kareena Kapoor and Kajol. Their chemistry had reminded us of the bond that we share with our sister. Kareena and Kajol are happily married now and have been enjoying their phase as parents beautifully and give parenting goals to every parent out there. To be in the glamour world and handling the pressure of the media and their constant glare on their kids sometimes becomes difficult for the celeb parents. Kareena and Kajol have been handling the pressure of media on their kids wonderfully and recently talked about the same.

Recently, the K3G sisters reunited on Kareena Kapoor Khan’s show, What Women Want and talked about how to bring up their sons, Yug and Taimur. During the show, Kajol spoke about how touching upon the topic of getting about a metamorphosis in the thinking process of men towards working women, needs to be inculcated in the opposite sex right from their earlier age. Further justifying herself as to why she believes in working despite her son wanted her to do otherwise. Kajol also talked about how she feels that their sons should learn how to treat a woman, as in today’s time and in the upcoming years he will be a strong support and equally capable of sharing the responsibilities. Kareena too agreed with Kajol. Take a look at the video:

During the same chat show, Kajol had also revealed one parenting lesson that she learnt from her son, Yug Devgn, which has really stuck with her. She was quoted as saying, “I was firing Nysa for not sitting with us. There was a Mata Ki Chowki at home, and I was like, ‘Nysa, come and sit with us. We are sitting here, why are you sitting at the table?’ She said, ‘Mumma, I really don’t want to.’ I really got angry and I said, ‘Come here and sit down!’ So, after she came, sat and left, my son turned around, sat in my lap quietly and told me, ‘You know, mom, you shouldn’t fire her for telling the truth.’”

Through the process of learning, parents also learn something from their kids and Yug’s advice has a big impact on Kajol and has stayed with her. Kajol was impressed by his advice and had told Kareena that, “I felt like, oh my God, that was such a….ulte haath ka thappad apne bachche ne maar diya mujhe (My own son gave me a backhanded slap)! It was amazing advice.”  (Suggested Read: Hardik Pandya's Father Himanshu Said They Were Left Surprised With Their Son And Natasa's Engagement)

In an interview with the Filmfare magazine, Kareena Kapoor Khan had talked about how her husband, Saif Ali Khan helped her in taking care of Taimur while she was away from home for her work commitments. She had shared, "I had support from my family. I had a lot of help. I had support from my sister (Karisma Kapoor) and of course most importantly, Saif. He comes from a family where his mother was working, his sister is working. It was easy for him to understand that I would take Taimur with me if I had to for a shoot. Absolutely 100 marks to Anil Kapoor and Rhea for being such fantastic producers. Taimur was so well looked after. I’ll always consider them as family. I couldn’t have asked for a better film to do after Taimur. And Taimur, of course, settled so beautifully in Delhi while I shot. He’s a happy trooper. Touchwood!"

In a 2018 interview with Filmfare, Kareena had shared how she is striking the balance between her work and her family. She had stated, "I was working through my pregnancy. Then five and a half months after my delivery, I began working on Veere Di Wedding. I took Taimur to Delhi for the shoot. I’m lucky to have an understanding husband who said, ‘I appreciate the fact that you want to continue your dream’. That’s the most important thing in a marriage." (Must Read: Soha Ali Khan, Kunal Kemmu, Inaaya Naumi Kemmu Enjoy 'Summertime In Sydney' With Play Date On Swings)

Kudos to Kareena Kapoor Khan and Kajol for sharing wonderful advice on parenting!