A video of Bollywood actress, Kareena Kapoor Khan getting ready at the airport for her cousin, Armaan Jain's roka ceremony will make you go awe. Take a look!

If there is one actress in Bollywood, who is unapologetically bold and beautiful, it is Kareena Kapoor Khan. Bebo wears her heart on her sleeves and always leaves the paparazzi's asking for more. She has given us so many jaw-dropping moments with her one-of-a-kind style. In the wedding of Armaan Jain and Anissa Malhotra, it was Kareena Kapoor Khan, who had won everyone's heart with her different stunning ensembles from haldi to the wedding. (Recommended Read: Suresh Raina Is Celebrating His 34th Birthday At The Maldives With His Family, Shares Exotic Photos)

However, a video of Kareena Kapoor Khan getting ready at the Bengaluru airport, while she was waiting for her flight to Mumbai in order to attend her cousin, Armaan Jain's roka ceremony is making us fall in love with Bebo all over again. Scroll down to see it!

On November 27, 2020, we stumbled across a video of Bollywood actress, Kareena Kapoor Khan getting ready at the Bengaluru airport, when she was going for her cousin, Armaan Jain's roka ceremony. In the video, the actress can be seen getting her hair and makeup done by her styling team at the airport, while she checked her face in the mirror. Talking about her attire, Kareena looked gorgeous in a traditional red suit with golden embroidery all over it. She accentuated her look with statement earrings, dewy pink-toned makeup and kohl-filled eyes. The actress can also be heard saying, "My new makeup room, the Bengaluru airport" in the video and we have to admit that it's just 'Bebo thing' to be honest. Take a look:

It was on December 14, 2019, when the Jains had hosted a grand roka ceremony for their son, Armaan Jain and soon-to-be daughter-in-law, Anissa Malhotra. The entire Kapoor clan was present there to give blessings to the soon-to-be-married couple. And, a happy picture of Kareena Kapoor Khan, her husband, Saif Ali Khan, her sister, Karisma Kapoor, with the cute couple, Armaan and Anissa had warmed our hearts all over again. Take a look: (Don't Miss: Shaheer Sheikh Ties The Knot With His Girlfriend, Ruchikaa Kapoor In A Court Marriage [Pictures])

On February 3, 2020, Armaan Jain had tied the knot with his lady love, Anissa Malhotra but it was Kareena Kapoor Khan and her son, Taimur Ali Khan, who had won our hearts with their jaw-dropping ensembles. The actress had donned a beautiful yellow saree with a golden blouse and had accessorised her look with statement earrings. Her look was completed with heavy kohl-filled eyes, highlighted cheeks and hair tied in a bun. On the other hand her son, Taimur had given his mommy a tough competition by opting for royal blue kurta and had teamed it with a white pyjama. The celebrity stylists, Tanya Ghavri had taken to her Instagram handle and had shared their pictures. (Also Read: Kareena Kapoor Khan Says Pregnancy Is Not An Illness And That She Can't Sit At Home)

Did you like Kareena's throwback video? Let us know! 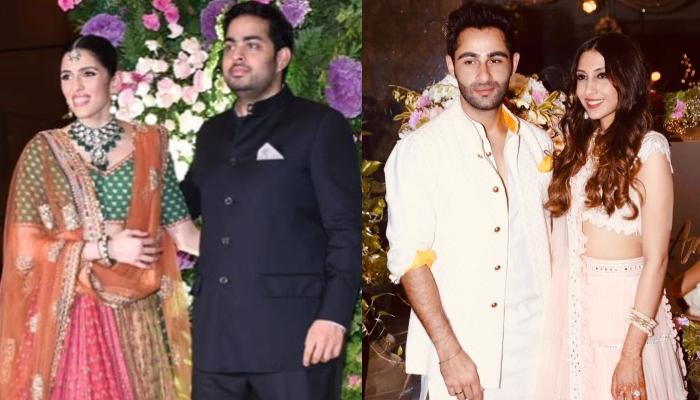 There is no greater joy than to see your brother dressed like a prince on a white horse ready to take his dulhaniya home. Accept it or not, but ladkewalas' level of excitement doubles up as they take their precious 'daughter-in-law' home. The wedding is not just special for the bride and