From twinning their outfits to being a foodie or travelling together, Kareena Kapoor Khan and Karisma Kapoor nails everything they do together. Check out their selfie inside!

‘Sisters before misters’ is a feeling that every girl understands as no man can ever take the place our sister holds in our heart. Kareena Kapoor Khan and Karisma Kapoor have been setting major sister squad goals since years. From being each other’s support system to being each other’s forever favourite, the two makes us understand what sister bond stands for. From twinning their outfits to being a foodie or travelling together, the sisters are often spotted doing everything together. (Also Read: Asha Negi Talks About The Love She Still Holds In Her Heart For Ex-Boyfriend, Rithvik Dhanjani)

The Kapoor sisters are the best in town when it comes to their personal dressing sense, and Karisma Kapoor had given a glimpse of the same a few days back. Taking to her IG stories, Karisma had shared a post of the Instagram page called ‘The same tribe’ which had featured her with her sister, Kareena for wearing a similar skirt. The Kapoor siblings could be seen wearing the same multi-coloured, tie-and-dye skirt, while both had styled it differently. The page had written ‘It’s a sister thing’ over the picture and agreeing to it, Karisma had shared it on her IG stories with three heart GIFs. 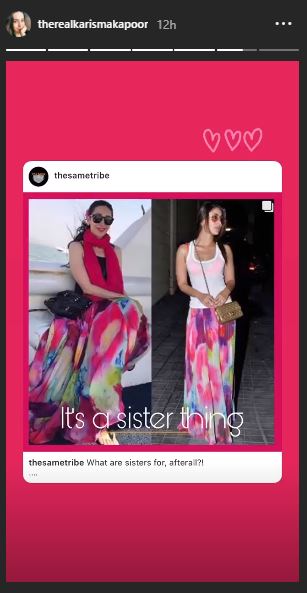 On August 11, 2020, Karisma Kapoor took to her IG handle to share a selfie with sister, Kareena Kapoor Khan, which looks like from one of their vacations together. In the picture, both the sisters sport big sunglasses, while Karisma’s look is a bit boho as she sports big neckpiece with azetc print top, whereas, Kareena can be seen wearing a polka dot top. Along with the picture, Karisma wrote, “Looking towards the sun, sand and sea #tuesdaythoughts #sistersquad.” Take a look: As we said, the Kapoor sisters operate together, and we often get a glimpse of this. It was in May 2020, when Karisma Kapoor had posted a collage on her IG story, which had the Kapoor sisters flaunting their ‘masked’ faces. Kareena and Karisma had looked amazing in their de-glam avatars, and had managed to keep the spirits high even when at home and apart. Karisma had a perfect caption for her IG story, which could be read as “Packing and Pouting together.” Karisma then credited Nisha Sareen for the facemasks, “Thanks @nishsareen this Matcha Mask was so good!! @kareenakapoorkhan.” On June 26, 2020, Karisma Kapoor had posted a childhood picture with her sister, Kareena Kapoor Khan as they both relished their favourite food at a party. Twinning in white and black outfits, Karisma had captioned her candid picture with Kareena as "Twinning since childhood #throwbackthursday #sisterlove #alwaysandforever #familygoals #fooodies #stylegoals.” Kareena had also posted the same picture on her IG handle and had captioned it as "Some of my happiest memories are from my childhood, which shaped me into what I am today." (Don't Miss: Ira Khan Enjoys Her Father, Aamir Khan's 19-Year-Old Peppy Song, Focuses On One Particular Detail) 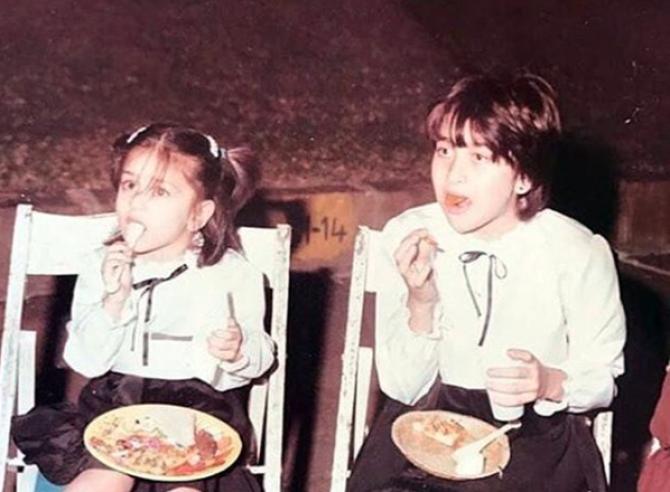 Kareena Kapoor Khan, in a 2016 interview with the Hindustan Times, had shared that in spite of being much younger to her sister, Karisma Kapoor, she had often bullied her. Bebo was quoted as saying, “She’s my older sister, but I think I kind of bully her sometimes. I fire her, and I also give her advice. But eventually, she’s the person I have grown up aspiring to be. Even the way she conducted herself back in the ’90s — she was a very private actor — was inspiring.” She had further added, “Her [Karisma’s] simplicity is her beauty and charm. That’s why, all her life, everyone around her has bullied her. But everyone who is a part of my life knows that if Lolo has said something, then it’s like gospel truth for me. And what I admire the most is the dignity with which she has conducted her life, her career, and single-handedly brought up her children, despite a lot of media stress, in terms of her marriage.” (Recommended Read: SSR's Father, KK Singh Had Tried To Contact Him Via Rhea And Shruti Modi, Reveals The WhatsApp Chat) 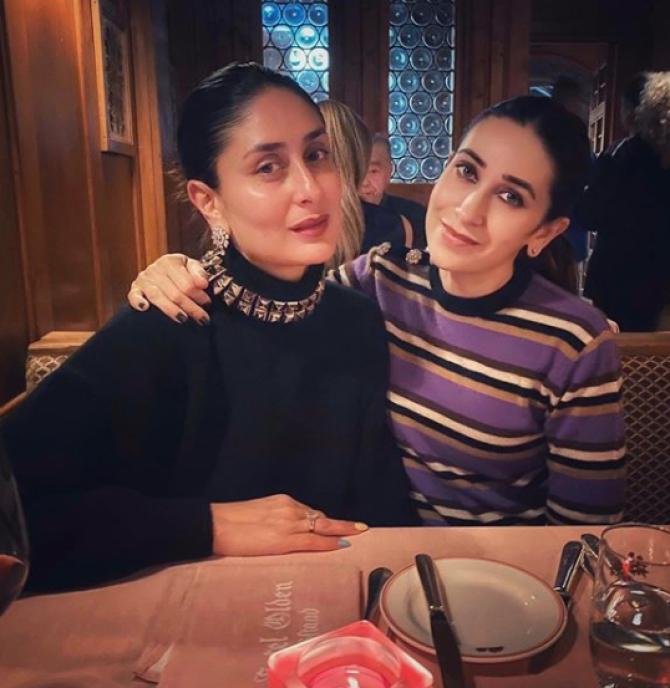 We love the sister bond between Karisma and Kareena. What about you? Let us know.