In a Mother’s Day post, Karanvir Bohra thanked God for letting his twins, Bella and Vienna experience the unconditional love of their dadi and nani. Scroll to see their lovely pictures. 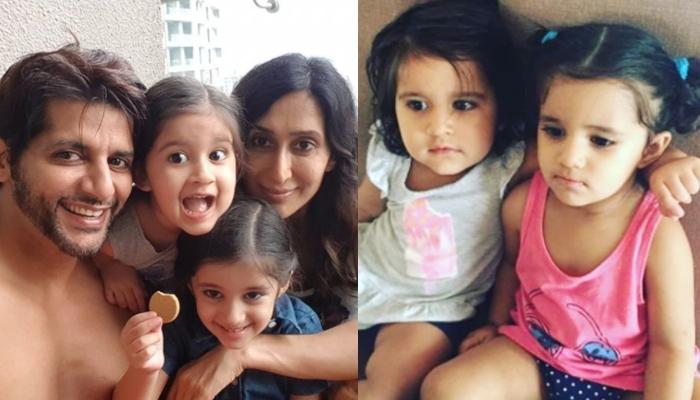 Being a parent is surely a bliss. And when God blesses you with not one but two little angels, it’s a hint that you’re on his favourite’s list. Being parents to twins means twice the diapers, twice the poos, twice the bottles, burps and coos. But it also means double the happiness, joy and celebration. Everything in life gets doubled and the parents are on cloud nine handling their little munchkins. For telly world star couple, Karanvir Bohra and Teejay Sidhu, the happiness was doubled and the moment was even more special because it was after ten years of married life, they had embraced parenthood. (Also Read: Geeta Phogat's Son Arjun's 'Dangal' Ready Pictures Prove He Will Follow The Footsteps Of His Parents) 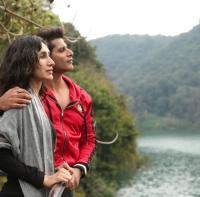 Post enjoying their married life for 10 years, Karanvir Bohra and Teejay Sidhu had welcomed their baby girls, Bella and Vienna in 2016. Over the years, Karanvir and Teejay have not only given #CoupleGoals, but also are an inspiration when it comes to raising kids. In a Mother’s Day post, Karanvir thanked God for letting his twins, Bella and Vienna experience the unconditional love of their dadi and nani. Sharing throwback pictures of newborn Bella and Vienna, Karanvir wrote, “The mothers and their children in my life #happymothersday actually #happymotherslife Thank you god for giving @twinbabydiaries #dadi & #nani love. If there is #unconditionallove in the world ...it’s the mother & child love” as his caption. 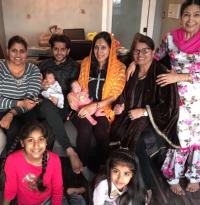 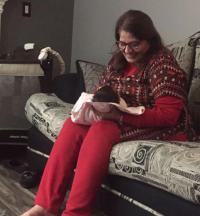 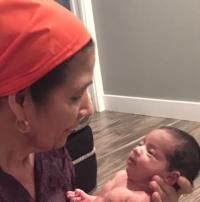 As Mother’s Day special, Bella and Vienna had made their mom, Teejay Sidhu feel special by giving her a painting made by them. Bella and Vienna didn’t know how to spell ‘love’ and ‘mom’ to which their dad, Karanvir said that it would mean the same if they just draw a heart. Sharing a video of their painting session, the official Instagram page of Bella and Vienna by the name of ‘twinbabydiaries’, the caption can be read as “BELLA /VIENNA - It's mothersday! And we are making a #painting for our #Mom, our first one ever! :) We love to paint and draw, so on special occasions, we make presents ourselves. We knew how to spell 'mom' but we didn't know how to spell 'love.' Our Dad said we could just draw a heart because it's the same thing.” Teejay had posted a picture and had written, “When we become #mothers, we also become art collectors! ;) Introducing my first pieces of abstract art.. the first of many! The #babies were so excited to present these to me yesterday! I hope when they are older, they never forget the joy of giving gifts made by their own hands. Thank you my loves, your #paintings are beautiful and I will cherish them always. #mothersday #mothersday2020 #memories @karanvirbohra Thank you, Dad, for planning this lovely surprise..” (Also Read: Karanvir Bohra Becomes A Kid, Playing With His Twins, Bella and Vienna, Try Gardening With Them) 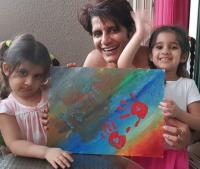 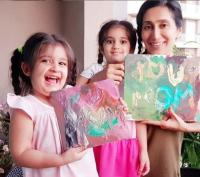 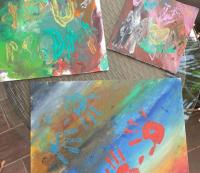 In an interview with The Times of India, Karanvir Bohra had revealed that it was a planned decision by him and his wife, Teejay Sidhu to not shoulder the responsibility of children for a decade after getting hitched. Karanvir and Teejay had wanted to enjoy their phase as husband and wife before becoming parents. He had stated, “Having babies late was not because I didn’t want to bear the burden of responsibilities. But once we were married, we wanted to spend time with each other and explore the world. As a couple we wanted to understand each other. I know it is important to have children, and couples in India plan to have kids soon after they are married. But in the process, the focus is on the children and not on the husband-wife relationship, which is the pillar that lays the foundation of a great marriage.” 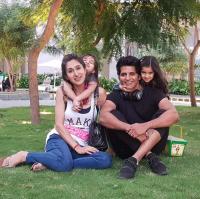 When Ramadan had commenced, Karanvir Bohra and Teejay Sidhu had explained their kids, Bella and Vienna the meaning of azaan and the little ones had wished everyone on the the auspicious festival. Karanvir, Teejay, Bella and Vienna praying for a better world and wishing everyone on Ramadan had proved that love has no religion. The video of Karanvir explaining them azaan was captioned as “We hear the #azaan everyday from my building, when my children heard it the first time they asked us what is it? We said it's called "azaan" and told the 5 time significance of it.... Let's is all pray for the well-being of the world. #ramzanmubarak.” And the picture posted on Bella and Vienna’s Instagram page was captioned as “BELLA / VIENNA - #RamadanMubarak everyone! We pray on all special days. And God listens to everyone, even #babies. Today we pray for everyone to be #blessed with #happiness and good health. That's the most important thing in the world - to be healthy and to be #happy. Sending you all love.” (Also Read: Karanvir Bohra Brings A Twist To The Viral Plank Challenge With His Twins, Bella And Vienna) 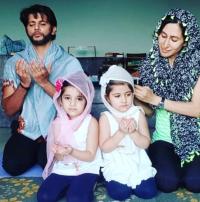 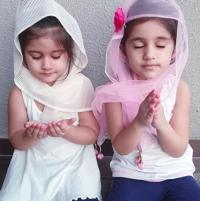 We wish Bella and Vienna happiness and love!