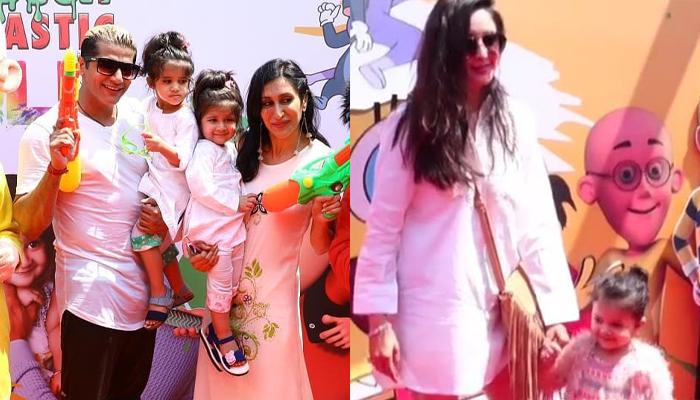 The festival of colours, Holi, is just a couple of days apart and just like every year, our favourite celebrities from the telly land are all set to make our Holi more colourful. And guess what? Karanvir Bohra, his wife, Teejay Sidhu and their twin daughters- Vienna and Bella seem totally engrossed into the Holi mood now. (Suggested Read: Katrina Kaif Pampers Herself With A Swanky Gift Worth 65 Lakhs, She's Making Most Of Singlehood Life)

Karanvir and Teejay’s daughters- Vienna and Bella hosted a Holi party yesterday on March 18, 2019, for their celebrity kids friends! Yes, the organic Holi which was themed around Nickelodeon cartoons seemed to be a party for all the celebrity kids of the telly land. Chahatt Khanna with her daughter- Zohar Mirza, Kashmera Shah with her kids- Krishank and Raayan, just-married Raghu Ram and Natalie Di Luccio, Jay Bhanushali with his daughter, Arjun Bijlani’s wife Neha with their son- Ayaan, and many other celebrities attended Vienna and Bella’s Holi party with their kids. Take a look at the pictures below:

Karanvir Bohra had taken to his Instagram and shared the following picture from Vienna and Bella’s Holi bash. He had captioned the picture as, “Holi is one of myself favourite festival, but never knew that playing an #ecofriendly #holi would be so much fun. And the best part, it was @twinbabydiaries first Holi party. And what better way than doing it with #slime. Thank you @nickindiaofficial. Also, have so many of my friends to thank, for coming with their children at #bellaandvienna #nickelodeon #slimetasticholi.” 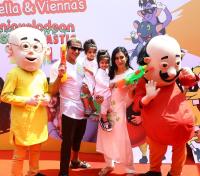 Karanvir Bohra had taken part in the recently concluded Bigg Boss 12. After he came out of the house, he had taken to his Instagram handle and shared an adorable video of how his daughters, Bella and Vienna reacted on seeing him for the first time post his Bigg Boss 12 journey. He had captioned it as, "I can't put into words the feeling you get when you see your children after so long."

Teejay Sidhu had posted an emotional note on her Instagram handle revering her husband, Karanvir Bohra. In the post, Teejay had shared an adorable picture of her husband along with their twin daughters- Vienna and Bella. She has captioned it as, "This is what matters.. being someone your daughters can be proud of. I am also so proud of you, sweety. To be in #BiggBoss from the first day until the last day, to walk away with dignity, #respect and #love is a huge achievement. Reality shows will highlight negativity and a person's shortcomings to get TRPs. But you were such a good human being, you set a new BB benchmark with your dignity, your grace, your patience. And you will always be remembered for that. You may not have won the trophy, but you were the winner of the show - you won millions of hearts! I love you, I respect you, always." (Must Read: Rishi Kapoor Wishes His Uncle, Shashi Kapoor On His Birthday, Shares Pictures From An Iconic Moment) 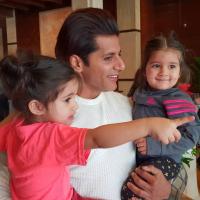 In an interview, Teejay Sidhu was asked if it’s difficult to manage work and two kids at the same time, Teejay had replied, “The good thing about our career is that it’s flexible. When I would shoot for 9 months Season 3, my husband Karanvir Bohra was there to take care of the kids. Even on-set he would tell them that mom is working so they need to wait and watch (laughs).”

She had further added, “When Karanvir was shooting for Naagin, I used to take care of them. Also, when you are an actor, you have vanity vans at your disposal which makes it easier to spend time with kids. It’s not that difficult. We don’t have a nanny for our kids. KV and I manage them. Of course, my mother is there to help us, which makes my life easier.” (You May Like: Parineeti Chopra Hints She Is Not Single, Says Love Is More Important And Reveals Her Marriage Plans) 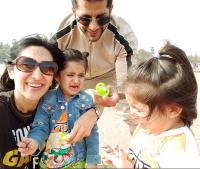 How did you like Karanvir and Teejay’s twins- Vienna and Bella’s Holi bash pictures and videos?

Images and Cover Courtesy: Karanvir and Teejay and Instagram