A couple of weeks ago, Ankita Bhargava had penned a note on going through the emotional turmoil of a miscarriage. Recently, Karan Patel shared his point of view.

For a woman, motherhood is the biggest gift which she anxiously waits for. The moment she sees the red lines on her pregnancy test kit, she cannot wait for the nine-months to pass. She impatiently waits to see her belly grow bigger and feel her baby's movement inside her. But nothing can ever heal the pain of losing her bundle of joy inside the womb. Miscarriages hurt and at times, it seems like the world has stopped, but women are strong and they make peace with their angel babies, who they carry forever in their hearts. And television actress, Ankita Bhargava had also gotten through same emotional turmoil in the year 2018 when she had a miscarriage. (Recommend Read: 'Mahabharat' Actor, Aayush Shah Reveals He Had A Crush On His 'Uttaran' Co-Star, Rashami Desai)

After the unfortunate incident, Karan Patel and Ankita Bhargava had kept their second pregnancy hidden from the media glares. They had made sure not to upload pictures and videos of Ankita's pregnancy journey and it was on Karan's birthday, the actor had shared that his wife was going to give him the best gift. And on December 20, 2019, Karan and Ankita's entire life had changed when they had gotten blessed with 'Rabb Di Mehr'.

A couple of weeks ago, Ankita had shared an emotional post on her first miscarriage, wherein she had bared her heart out. Now, during an interview with Pinkvilla, Karan was asked about the same and the actor shared how his wife has shown immense courage in those hard times. He shared, "It was a heartwarming post. If you’re a human you will feel the pain if God forbid something of that sort happens to anybody. But at the end of the day, it is life, and life goes on. You have to make sure that you are strong enough to overcome that mishap and to also let your partner rely on you. Dono mein se koi ek, has to be much stronger. Hamare case mein Ankita was the stronger person." (Also Read: Jasleen Matharu's Beau, Abhinit Gupta Has A Funny Reaction To Her Cooking, All Spouses Can Relate)

Talking about the emotional post, Ankita had shared her heart's deepest emotions in her Instagram post. She had written, "Technically I wrote this a few days ago, But it took me time to muster up the courage to make this post! This is by far the most personal post that im ever going to write, With hopes that I can make at least a little difference in someone's life... At first, I didn't want to talk about it to anyone at all. But then after having counselled more than TWO DOZEN women over DMZ on Instagram all over the country, I realised it is time I openly talk about ‘MY MISCARRIAGE’ The most important takeaway for me from this experience was... DONT KEEP RELIVING THE PAST. DONT KEEP WAITING FOR THE FUTURE. JUST SIMPLY LIVE IN THE PRESENT. I hope this helps."

Coming to Ankita and Karan's parenting duties, in an interview with SpotboyE, the actress had shared how the new daddy is handling fatherhood. She had shared Karan's reaction when he had entered the delivery room to see their baby, "I was in Operation Theatre and Karan was with me inside. The moment doctor informed us that it's a baby girl we were overjoyed as both of us wanted a girl and it happened. Our day starts with Mehr and ends with her. There is nothing else and nobody else on my mind. I try to accommodate Naughty in her schedule now because he is our first child and I have to balance both of them. I have to be with her all the time as she needs me the most." (Don't Miss: Riddhima Kapoor Is Excited For Her 'Maa' Neetu Kapoor's Birthday, Posts Unseen Pictures On B' day Eve)

Well, we love Ankita and Karan's love for each other!

Karan Patel On Ankita Bhargava's Miscarriage, Says It Was A Movie Which Didn't Release 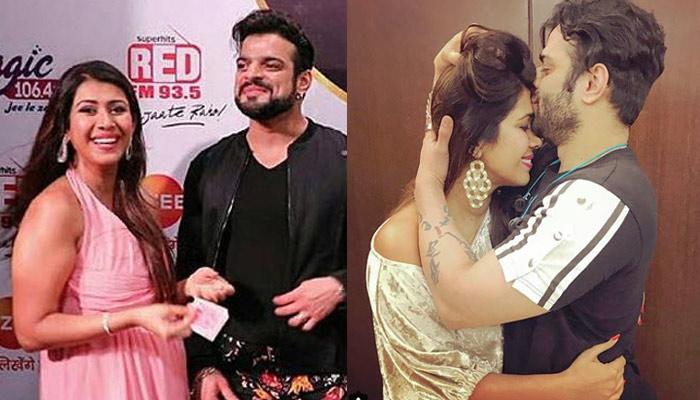 How happy it is when a couple is all set to embrace parenthood and welcome their own production into this beautiful world. And what if the parents-to-be lose their baby before it arrives. Can’t even think of it, right? It would be a nightmare and the ugliest thought. This sad