When in love, you start doing things, which you otherwise would've never done. Like Jasleen Matharu, who is trying her hands in the kitchen for her beau, Abhinit. Check out his reaction on the same! When you're in love, everything seems jolly and blissful, and you start doing things, which you otherwise would've never done. Something similar happened with TV star, Jasleen Matharu, as she tried her hands in the kitchen for her beau, Abhinit Gupta. For those who don't know, Jansleen Matharu had confessed being madly in love with a Bhopal-based surgeon named, Abhinit Gupta in an interview with SpotboyE. She had also revealed that she had met Abhinit through Anup Jalota and said that Abhinit is a cosmetic surgeon and has clinics in Indore and Pune. (Recommended Read: Shraddha Kapoor Wishes Brother, Siddhant Kapoor With An Unseen Childhood Photo, Calls Him TP Partner)

Love knocks at your door just when you need it, and who can know this better than Jasleen Matharu, who was looking for her Mr Perfect from some time. And, in an interview with The Times of India, she had revealed that Anup ji had helped her find a man, and had introduced them virtually. She had said, "Anup ji had told me about this doctor, who separated from his wife last year. But, the matter couldn't progress owing to the lockdown. However, rather than delaying it further, he introduced us virtually. We talk a lot and get along well." Now, Jasleen has taken to her IG handle and reposted a picture of herself cooking, which was posted by her beau, Abhinit on his IG story. In the fun picture, we can see Jasleen engrossed in cooking and kind of looks happy with herself, although it was the caption that her beau, Abhinite wrote on the playful picture that made us laugh. He wrote, "Pata nahi kaisa khana banega" atop it, followed by an array of emojis. Take a look at the picture below: 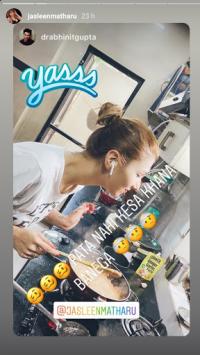 Jasleen Matharu had revealed in an interview with SpotboyE that she is madly-in-love with her bae, Abhinit. She had also talked about how she is trying and learning to make new dishes for him and had said, "I have never entered the kitchen but now I am so much in love with him that I am trying to learn every dish which he likes. Now, I am just waiting for him to come to Mumbai so that I get to cook everything for him. In one of our conversations, he had told me that he likes ladoos a lot. And I told him should I make it for you? So, he was like I would love to eat it. And knowing the fact that I don't know how to make it or made anything like this before, he suggested I start with kurmura laddu as that's easier but I told him I will make what's his favourite and that's til ke laddoo. In fact, I successfully made the ladoos and have couriered him now. And he is excitedly waiting there to eat. He also said, 'I have informed my parents ki Bahu ki taraf se ladoo aa rahe hain.'" (Also Read: Mira Rajput Kapoor Shares An Unseen Picture From Anand Karaj With Shahid Kapoor On Fifth Anniversary)

Jasleen couldn't stop talking about the love of her life, Abhinit and had opened up on how he had changed her completely and had said, "You won't believe today when I scroll YouTube the only videos I am watching is about cooking. It's a strange feeling as I never thought I would do something like this for someone. This guy has really changed me. It feels like I am discovering a new me sometimes. I have started waking up early in the morning. I was a late person and used to get up at 1:30-2'o o'clock but now he has also become an alarm for me and makes sure that I wake up by 10am. He is trying to inculcate a healthy routine as I am habituated to be awake till late night. And I am loving this change completely." (You May Also Like: Himanshi Khurana Is Superstitious About Her Love Life With BF, Asim, Talks About Being Poles Apart)

Well, we already hear the wedding bells of Jasleen Matharu and Abhinit Gupta!