Karan Johar's kids, Yash and Roohi Johar mistook a poster of Mick Jagger in his closet with Shahrukh khan, say Sharukh lives in dada's closet! Scroll down to find out more.

Who doesn't know the mighty Shahrukh Khan? As we Indians proudly introduce ourselves in a foreign land, we belong from the country of Shahrukh Khan, 'nam toh suna hi hoga'! Jokes apart, Shahrukh Khan is a global icon and is extremely popular in the whole world. He is the only actor whose popularity exceeds generations! Being millennials, we're fans of Shahrukh, our parents were fans of Shahrukh, and now, even our kids are fans of Shahrukh. Never before in our sane minds, we can recall another actor, who has enjoyed stardom to this level! (Recommended Read: Ankita Konwar's Workout Session with Husband, Milind Soman's 'Aai' Is 'Saasu Maa-Bahu' Goals)

The nationwide lockdown due to the deadly pandemic Coronavirus has made us value even the seemingly insignificant and irrational things as well. Like, spending quality time with our family members. Now don't get me wrong, what I wanted to say is, we were so busy in our fast-forward life, that spending time with our family members at one point, due to the lack of time, seemed irrational and insignificant to us. But this lockdown sure has a good side to it, as it has made us stop and realize that it is high time we stop taking things for granted. Even our Bollywood celebrities are going through the same emotions and they've finally got the time they always dreaded, to spend with their family and loved ones. And they have resorted completely to social media to interact with their fans and update them about their quarantine activities. One such name would be of Bollywood's favourite director-producer, Karan Johar, who is enjoying his quarantine with his kids, Yash Johar and Roohi Johar. Karan is very active on social media and keeps updating his fans about the gimmicks he and his kids, Yash and Roohi are up to, now and then. Karan has even invented a hashtag for videos of him and his kids in quarantine, which is "#lockeddownjohars". Anyway, in the recent video posted by Karan is hilarious. In the video, his kids, Yash and Roohi can be seen running to his closet, claiming that Shahrukh Khan lives in dada's closet. When Karan surprisingly asks them, where is Shahrukh khan both of them innocently point towards a poster of Mick Jagger. To which Karan laughs and tries to explain, he is not who they think he is. Karan captioned the video as "Apparently we had a superstar spotting in my closet! Do watch! I also got a firing! #lockdownwiththejohars #toodles". Have a look at the video here: (You May Also Like: Alia Bhatt's Cooking Session With Sister, Shaheen Will Make You Slurp)

In yet another video, Karan could be seen talking about his clothes, with Yash and Roohi and explaining to them what is what, but they seem rather uninterested and laugh on Karan's clothing choices. At one point in the video, Karan himself seems to agree with them when he refers to his Versace jacket as a blanket. Karan had uploaded the video with the caption "Randomness in the closet! #lockdownwiththejohars #gocorona". Have a look at the video here. (Suggested Read: Karan Johar Gets Reality Check On His Wardrobe From His Toddlers, Yash Laughs On His Clothing Choice)

Apart from his directorial expertise, Karan Johar is also weirdly famous for his fashion sense. What do you think about Karan's fashion sense? Let us know! 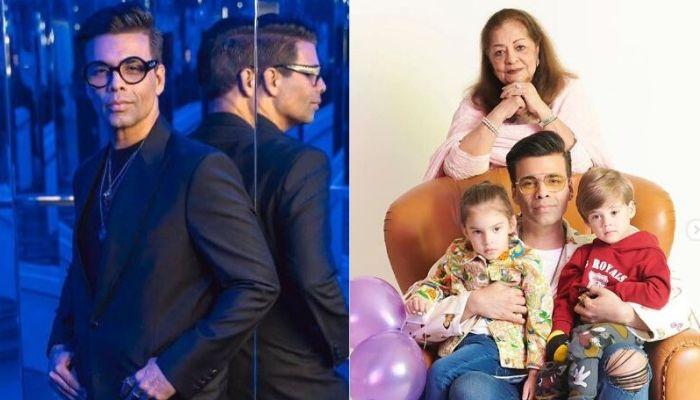 Bollywood has been taken over by celeb kids! We all just wait for the celebrity parents to share a picture or a video of their darling kids, so that we can gush over them and absorb every little sight of these goofballs to the fullest. Bollywood has been constantly giving us