Karan asks for opinions on his clothes from his toddlers, Yash and Roohi Johar, and gets trolled by them in response.

Quarantine, Quarantine, Quarantine! If you stand on your terrace and shout these words at the top of your lungs, you'll hear 'What to do? What to do? What to do?' as the echo of your voice. Since, quarantine and boredom have become two sides of the same coin, 'what to do' is constant, being the edge of the coin! See, this is what quarantine and self-isolation do to a sane mind. Pardon me for jumbling words recklessly, but if you read it carefully, it all makes sense! (Recommended Read: Quarantine Update: Divyanka Tripathi And Vivek Dahiya Explore Never Seen Before Sides Of Each Other)

Anyway, moving on, let's distract ourselves from these gloomy times and talk about something interesting. Like fashion maybe? Bollywood celebrities and fashion have an unbreakable bond with each other, since the former can't run without the latter, and the latter loses its meaning without the former. We, the common people follow celebrities and are inspired by their fashion sense, but who are celebrities inspired by? Or does their fashion sense gets the same laud from their family members as it does from their fans? Since, we have nothing better to do, we decided to spy on social media to check up on the same, and we were not disappointed. In fact, we got a jackpot for ourselves, as we caught hold of none other than Karan Johar himself, asking for an opinion on his clothes from his toddlers, Yash and Roohi Johar.

Since the quarantine has been imposed, an already very active celebrity that director-producer Karan Johar is, on social media, he has become even more active. Karan often shares funny videos and pictures with his fans to give a sneak peek of his life with his kids, Yash and Roohi. The recent charade being, Karan has filmed a video of Yash and Roohi, playing in his closet. Roohi has held one of his suits, and practically insults Karan, by saying a sharp "no", when Karan asks if she likes his suit. Karan then goes on to tell her that they're the same suit he wore for Filmfare awards, but Roohi doesn't seem to care. On the other hand, we can see Yash holding a piece of cloth and laughing vigorously on Karan's clothing choices. Karan captioned it as "Bachche man ke sache has a new meaning in my sartorial choices! #toodles #lockdownwiththejohars" Have a look at the video here: (You May Also Like: Sara Ali Khan Looked Adorable As She Twinned With Her 'Abba', Saif Ali Khan In A Throwback Picture)

In yet another video that Karan posted, we can see Yash holding his pink sneakers and disapproves of them to an extent that he goes ahead and calls them Roohi's (maybe because of the colour pink)! Anyway, Roohi can be seen shouting from far that they're not hers but belong to Karan. Karan seems utterly confused in this fun video. He captioned it as "He disapproves! She dismisses! #myfashionpolice #lockdownwiththejohars" Have a look at the video here: (Suggested Read: Erica Fernandes Gives Funny Name To Kasautii Zindagii Kay Co-star And Ex-Boyfriend, Parth Samthaan)

We all need fashion advisors or as we millennials call them 'fashion police'' in our lives, to keep our styling and fashion sense on point.

Who is your 'fashion police'? Let us know! 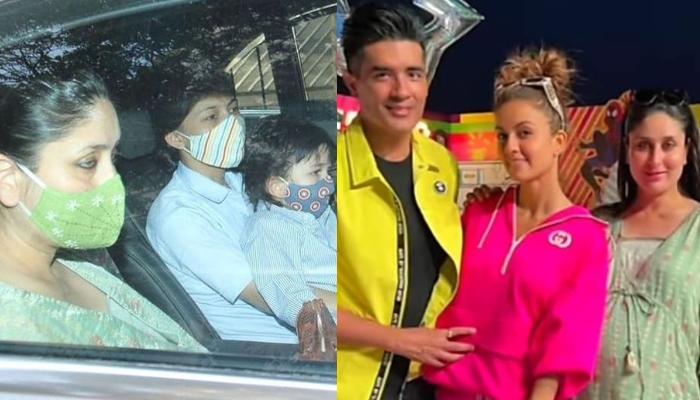 When Kareena Kapoor Khan was pregnant with her first child, Taimur Ali Khan, back in 2016, she had set the bar high for expecting women with her fashionable sartorial picks. Be it walking the runway with the utmost confidence in a Sabyasachi lehenga flaunting her baby bump, high-slit gowns, baring