Karan Johar surprised one and all after he shared the happy news of the arrival of his twins. He became a single parent to twins, a girl and a boy, on February 7, 2017, through surrogacy. He named his little bundles of joy Yash and Roohi, after his parents’ names. It is a known fact that Karan Johar never wants to get married. He mentioned this in his autobiography as well, but he also expressed that he wants to experience fatherhood and become a parent like his own parents. At the age of 44, Karan welcomed his twins, Yash and Roohi and since then, Karan is on cloud nine. The emotional father recently wrote a heartfelt letter to his babies.

Also Read:Malaika Arora Gave A Perfect Reply To A Man Who Accused Her Of Being A Gold Digger

Take a look at the letter written by Karan:

I was 44-years-old when you were born to me, and almost immediately you made me as sentimental as a Hallmark greeting card. I spout clichés on how magical the two of you are, how you have filled the vacuum in my life and how you made my house a home, but it’s true.

You've changed my life completely, and I'm not complaining. I worry a lot more than I ever did — I have these strange thoughts about my insurance premium, my will, even the division of my assets. I stay awake some nights wondering who I can appoint your guardian if something happened to me.

Also Checkout: 11 Bollywood And TV Divas Who Looked Like A Doll On Their Baby Shower

For now, for me, thoughts of what or who I’d want you to be are a long way off—instead, my survival and longevity have taken on a new importance. It might sound selfish but it’s my immediate instinct, to be there for you as long as I can, no matter what. Do you want to know the first thing I did when you were born? I started going to the gym and got myself a nutritionist. All to get healthier, so I’m around. I’m aware that the one thing I can give you, that I owe you, is my life. So when I think of what dreams and aspirations I have for you, my first dream is that I’m there long enough.

Most people underrate the gravity of the decision to bring a child into this world. It’s considered a part of regular life—you get married and procreate. It’s simply the done thing. But in today’s day and age, filled with urban angst and crazy schedules where one is barely able to handle their own life, bringing a new life is a big decision. It felt instinctual, I just knew I was ready—to nurture you in the way that I knew best.

You May Also Like: At The Age Of 33, This 'Rab Se Sona Ishq' Fame Actress Is Expecting Her First Baby

Parenting advice is available in every nook and cranny—from what formula milk to how you should be burped. There were aunts and uncles who would extol the virtues of an ergonomically designed cradle and others who would wax eloquent on the degree of softness that your baby pillow should possess. I listen to everyone’s advice, but as a single father I’ve had to find my own path, my own way of being your dad. I am learning to rely more on my instincts and I’m learning to accept the fears, apprehensions and insecurities that come with being a dad.

I’ve already started imagining things like your first day at school, your first words and even your first acknowledgement of me. To tell you the truth, every single day I whisper ‘papa, papa, papa’ into your ears because I'm petrified that your first words will be in Malayalam (all our four nurses are from Kerala)!

WATCH: Shahid Shared An Adorable Video Of Him Dancing With Baby Misha And It Is So Cute

My second dream of what I wish for the two of you is, strangely, a reaction to all those who will ask us: “Will your kids take your legacy forward?” My father never forced me to do what I’m doing. In fact, he did not want me to do what I’m doing. He wanted me to branch out of the industry, so, likewise, I don’t want you to do what is expected just because I have a company and have built a legacy. You don’t have to take my company forward if you are not inclined towards the film business. Instead, I wish that I bring you up to become people who are fiercely independent in your choices, opinions and your individual lives. The legacy, if any, I want to pass on is the independence that I was given.

Earlier this year, I attended a session with Sadhguru, and he said something beautiful that stayed with me. He said he brought up his daughter by imparting to her no knowledge. He didn’t teach her anything—whatever she learned was from the environment around. That’s what I want my children to do. I don’t want you to conform to the knowledge that is available. So, my third hope for you is that you never feel the need to conform to convention. I wouldn’t want you to be religious because you are told to be so, or turn to spirituality because it’s the cool thing to do. I don’t want you to do what people think is right. I want you to grow and acquire your own beliefs. I don’t think there’s a rulebook I can follow to take care of you, but I do believe that if I have my own strong value system, it will be imbibed into our home (and our lives), organically.

Recommended Read: Shveta Salve's Heartfelt Letter To Her Unborn Baby Is Going Viral For All The Right Reasons

Lastly, I don’t know how much of your journey I will be around to witness, but it’s important for you to do just one thing—remember. I always remember what my father did and who he was. I live with my mother and I love seeing what she says and what she doesn’t. I want you two to eventually remember it all. 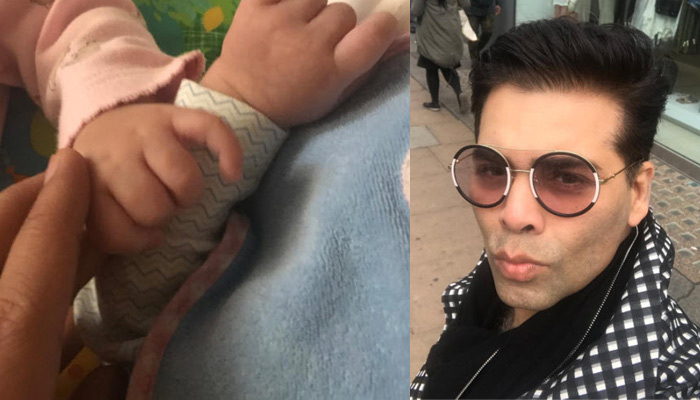 This is beautiful, Karan! What you are trying to communicate to your kids is worth applauding and appreciating. We can totally understand that how eagerly you are waiting to hear the word ‘dad’ from your little munchkins.

Recommended Read: For The First Time After Becoming A Dad, Karan Johar Candidly Talks About His Twins

Karan’s letter to Yash and Roohi is so heartwarming that we can’t stop ourselves from reading it again and again! You are one of the coolest dads in the B-town, Karan. May God always bless you, the babies and your mother!