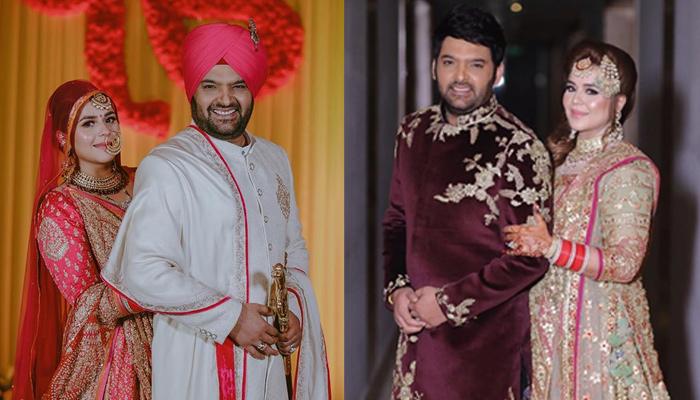 Wedding rumours of one of the finest comedians of India were doing rounds in the media for quite sometime when on November 27, 2018, an official statement popped from Kapil’s social media handles, confirming his wedding. Kapil Sharma and Ginni Chatrath got married in the former's hometown in Jalandhar on December 12, 2018, and had hosted two receptions to celebrate their wedding. (Do Read: Misha Kapoor Enjoys Playdate On Beach With Isana Kapoor, Mira Kapoor Shares What Baby Zain Was Doing)

While December 14, 2018’s reception was meant for his friends and family members in Amritsar, it was his star-studded wedding reception on December 24, 2018, that we all were looking forward to, wherein, the who’s who of the tinsel town had attended his wedding celebrations. One of them being this stunning star couple, Deepika Padukone and Ranveer Singh who made the most of Kapil-Ginni’s wedding reception. Take a look at the same incase you missed it:

Well, if you thought that two wedding receptions were all about it for Kapil Sharma and Ginni Chatrath, you were wrong! As per an India Today report, Kapil and Ginni are all set to host yet another wedding reception in Delhi on February 2019, for their politician and bureaucrats friends. With stars like Deepika Padukone-Ranveer Singh, Priyanka Chopra-Nick Jonas setting the trend with multiple wedding receptions, looks like Kapil Sharma too, doesn’t want to be left behind. To add to this, Kapil Sharma was seen bonding with a VVIP at the inauguration of National Museum of Indian Cinema in Mumbai. Do you know who was it? It was none other than Prime Minister, Narendra Modi! Hence, don’t go in for a momentary frenzy if you happen to spot him at Kapil’s Delhi reception!

Kapil is once again, riding high on his success pillion these days. With wedding congratulatory wishes pouring in, an episode at The Kapil Sharma Show subjected the comedian-cum-actor to a lot of backlash. To give you all a recap, Thackeray co-stars, Nawazuddin Siddiqui and Amrita Rao came as guests on his show. Kapil, famous for his fun-filled flamboyant attitude on the show, was seen flirting with Amrita, when she exclaimed, “Oh my God, inki abhi abhi shaadi hui hai”, and Kapil at once replied, “Are wo PR stunt that”. He further added, “Mere baare main badi galat galat khabre aayi thi to maine positivity felani thi bus isliye.” Without checking his words, Kapil further added, “Are wo larki (Ginni) actress hai.” And as expected, a lot of hate was spread for Kapil for having said these words. (Also Read: Prateik Babbar Makes His First Appearance With Wife Sanya Sagar, Gets Clicked At Mumbai Airport)

Kapil and Ginni rang in New Year 2019 as a newly-wedded couple. Wishing all their fans for the same, the couple posted almost similar pictures on their respective social media profiles. While the leading man from The Kapil Sharma Show wrote, “Thank you so much for your love and best wishes. Wish you all a very happy new year from me and @ginnichatrath. Love u all”, Ginni captioned it as, “Wish u all a very HAPPY NEW YEAR from me n Kapil #2019 #newyear #newlife @kapilsharma.” Here are the pictures:

In an earlier interview with IANS, the Firangi star confirmed his wedding news to all and revealed details about the same. He had stated, "The wedding is on December 12 in Jalandhar. That’s Ginni’s hometown. We wanted to keep it low key. But Ginni is the only daughter in her family. Her folks wanted the wedding to be on a lavish scale. And I completely understand their sentiments. My mother also wants the wedding to be lavish”. He had further added, “My mother has been saying that I should get married for a long time. Suddenly I realised that ‘abhi age ho rahi hai’ (I am getting on in age). So, I thought what if she says ‘no’ and after one or two years, no one agrees to get married to me.”

In an interview with the Bombay Times, Kapil and Ginni had revealed their love story. They first met in college and Ginni would bring food for him everyday out of respect. Kapil also shared how he once directly asked her if she likes him and she denied it. He recalled, “My friend told me that Ginni likes me, but I rubbished him. One day, I directly asked Ginni, ‘Tu mujhe like toh nahi karti?’ and she denied. Later, at a youth festival, I introduced her to my mother as one of my students."

He further stated, “Then I came to Mumbai for the 'Laughter Challenge' audition and by then, I had also appeared on a Punjabi TV channel. Ginni was impressed with me because I was studying and working at such a young age. When I got rejected for 'Laughter Challenge', I called her and said, ‘Please don’t call me’. I felt that our friendship has no future, as her financial condition was better and we belonged to different castes. So, we took a break. When I got selected for Laughter Challenge after auditioning again, she called to congratulate me." (Must Read: Sushmita Sen's Brother Rajeev Sen Is Dating Popular Television Actress Charu Asopa, Details Inside)

And the rest as we say, is all history!