Kangana Ranaut Dancing On A 'Pahadi' Song At Her Brother, Akshat's Engagement Is #FamilyGoals

Kangana Ranaut Dancing On A 'Pahadi' Song At Her Brother, Akshat's Engagement Is #FamilyGoals

Kangana Ranaut’s brother, Akshat Ranaut got engaged and the family spent some quality time. A video shared by Kangana's sister, Rangoli Chandel has her dancing on a ‘Pahadi’ song. 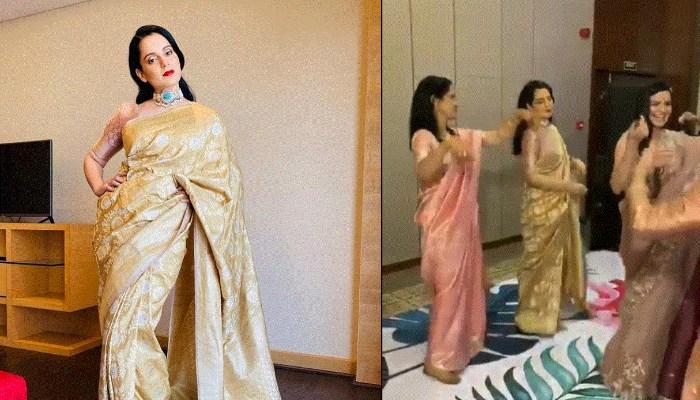 Indian weddings are filled with dance, masti, and dhamaal. Rituals in an Indian wedding starts with pre-wedding festivities and continue even after the marriage and look like festivals. In India, weddings are not just an occasion to celebrate the union of two souls, but a bond that gets cemented for saat janam. When there is a wedding in the house of a close family member, everybody starts to prepare everything months in advance. (Recommended Read: Malaika Arora Wishes Her Son, Arhaan Khan On His 17th Birthday, Calls Him Her Strength And Weakness)

The bond between a brother and a sister is filled with lots of care and mischief. They will fight with each other, scold each other, but will always stand by one another and will protect you from parents scolding and will help you to come out of every difficult situation. Such is a bond between a brother and a sister and Bollywood’s Queen, Kangana Ranaut also shares such a bond with her brother, Akshat Ranaut. Akshat recently got engaged and the pictures from the ceremony have been trending on the internet.

Yesterday, Kangana Ranaut’s sister, Rangoli Chandel took to her social media accounts and shared adorable and lovely pictures from her brother, Akshat Ranaut’s engagement. The ceremony was attended by Kangana and she looked stunning and gave major outfit goals to all the groom’s sisters. Apart from the pictures, Rangoli shared a video in which Kangana can be seen dancing on a Pahadi song, along with her sister, Rangoli and other family members. Check out the video:

Friends who are curious about pahadi group dance form Natti, here’s a glimpse of it, elderly gentleman in a pahadi hat is our grandfather Shri Barahmchand Ranaut ex IAS officer ðŸ™ pic.twitter.com/HxQRZHZa3s

On November 8, 2019, Kangana's official Instagram page had posted pictures from the ceremony. In one of the pictures, we can see Kangana donning a golden banarasi saree and had accessorised her look with a choker neckpiece, subtle makeup, bright red lipstick and had left her tresses loose. The entire Ranaut clan had donned the shades of pastel for the engagement and looked perfect complementing each other. (Suggested Read: Kratika Sengar Reveals Untold Facts About Her Wedding, Says Hubby, Nikitin Dheer Thought She Had Ego)

On March 23, 2019, Kangana Ranaut had ringed in her 32nd birthday and her sister, Rangoli Chandel flipped through the old family pictures and had posted a throwback picture of baby Kangana. She had taken to her official Instagram handle and had wished Kangana by writing, “Her soul is made up of wild flowers, that’s why she chose the month of spring, when the earth laughs in bloom!! Happy Birthday to my adorable sister!! Love u a lot #Springbaby #KanganaRanaut.” Kangana once in an interview with the Telegraph had talked about her siblings and had said, “Haan. jo kahin ke bhi nahin hote hai! (Laughs) My sister (Rangoli) and brother (Akshat) have a lot of childhood pictures, but I hardly have any. I have to look for my pictures as a kid in some relatives’ wedding album or something…. When I was born, it was like, ‘Achha, chalo.’"

In an interview with The Telegraph, Kangana Ranaut had talked about her childhood and had said, "What a Bengali family can’t even think of, my family was like that! (Laughs) Back home in the mountains (Kangana hails from Bhambla in Himachal Pradesh), we had no connection with music and dance was considered vulgar. Studying arts was for students who couldn’t make it to medical entrance… the 30 per cent types. Jo kuch nahin karte hai woh arts karte hai! (Laughs) Films weren’t considered good. In Himachal, we had very few theatres and people who went there were considered to be shady, and girls could definitely not go."

Talking about the disparity between her and her brother, Akshat since childhood and insecurity, Kangana, during the same interview had revealed, “I was told there were different rules for me and different rules for my brother, and I found myself constantly rebelling against that. I was born with a very strong sense of being a life on my own. I always questioned this difference. People would constantly root me into physicality. Like when I would wear jeans, my grandmom would keep telling me, ‘Look at your hips! With those hips, you shouldn’t be wearing jeans anymore!’ I didn’t understand these things. There was also a sense of not belonging there. When my house was being renovated, there was a room for my brother, but none for me. My parents were certain that they would get me married and I would leave soon. So, there was a constant feeling of insecurity." (Do Read: Kangana Ranaut's Brother, Aksht Got Engaged, Her Bhabhi Is Looking Pretty In Pastel Pink Saree)

We love Kangana Ranaut’s dance performance on the Pahadi song. What about you?

Rangoli Chandel Thanks Her 'Chotu', Kangana Ranaut For Helping Her After The Horrific Acid Attack 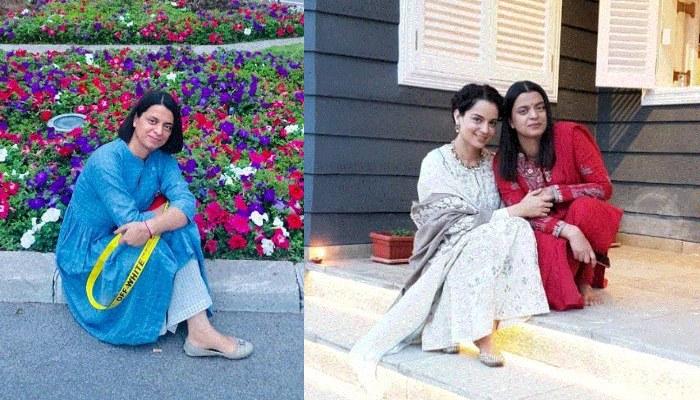 A person is lucky if he/she is blessed with a sister. For a few, it's hard to understand the connection that one shares with his/her sister. From sharing clothes (read steals) to being each other’s secret keeper, a sister will always be your best friend and a critic at the same time. She