Television actress, Kamya Panjabi recalled the time when Armaan Kohli abused her inside the 'Bigg Boss 7' after a user questioned her stand for supporting Jay Bhanushali. Details inside!

Popular television actress, Kamya Panjabi has been in the headlines since the start of the reality show, Bigg Boss 15. The actress has been a constant supporter of one of the show's strongest contestants, Jay Bhanushali. However, in one of the show's recent episodes, Jay Bhanushali was involved in a fierce war of words with co-contestant, Pratik Sehajpal, and had even abused him. After which, a user questioned Kamya's decision to support Jay, and the actress gave a befitting reply to the troller.

On the personal front, Kamya Panjabi had tied the knot with the love of her life, Shalabh Dang, on February 10, 2020, and since then, they had never skipped a single chance to shower their immense love on each other through their romantic gestures on their respective social media handles. On October 12, 2021, a user questioned Kamya Panjabi's stand for supporting Jay Bhanushali even after he had abused his co-contestant, Pratik Sehajpal, inside the Bigg Boss 15 house. The user reminded Kamya about the time when she had indulged in a fiery fight with Armaan Kohli, after he called her a 'divorcee' in Bigg Boss 7. The user wrote, "Armaan ke "Divorcee" bolne pei aapne poora ghar sar pei chadha liya tha... Even at that time I was against Armaan... But try to understand, this is Maa ki gaali, to a guy who is raised by a single Mother.. Cricket ko Bigg boss se compare kyu #BiggBoss15 #BB15 #PratikSehajpal.” The actress didn't take much time in replying to the user and shocked the entire internet after she revealed that Armaan Kohli had not only called her a 'divorcee' but had also abused her. The actress recalled everything about her ugly fight with Armaan, and her blazing tweet can be read as "Armaan ne sirf divorcee nahi kaha tha balki bahot sari maa behen ki gaaliyan bhi di thi, I kept laughing at him n then cried akele meh. Maine koi aggression nahi dikhaya naa koi bb ki property todi, warna dono meh fark kya reh jaata! Aur gaali toh gaali hai na cricket ho ya bb.”

Don't Miss: Freida Pinto Got A Gorgeous White Baby Shower Amidst The Nature, Her Pregnancy Glow Is Unmissable 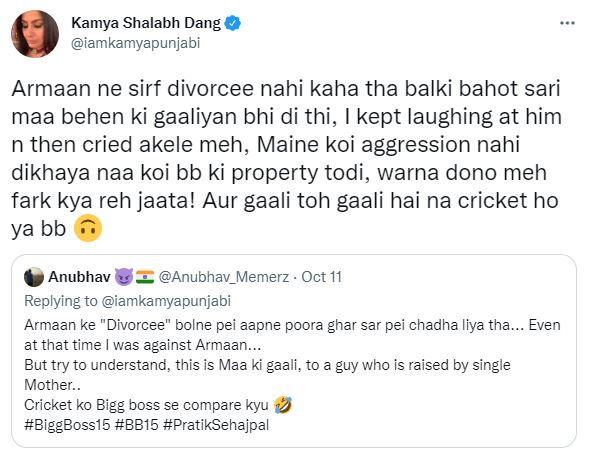 The year 2021 is filled with a lot of happy news for Kamya Panjabi. On January 4, 2021, Kamya had taken to her Instagram handle and had shared a glimpse of her new home. The lovely couple, Kamya and Shalabh, had purchased a new home, and it was inaugurated by Kamya's mom-in-law. The actress had posted an IG story, wherein we could see Kamya's mom-in-law cutting a red ribbon to their new home. Atop it, Kamya had written, "That's my ma-in-law and that's our new house. Thank you Bappa #HappyNewYear #HappyNewHouseToUs @shalabhdang." Shalabh had also taken to his IG stories, and had shared a lovely picture of his mother cutting the ribbon. 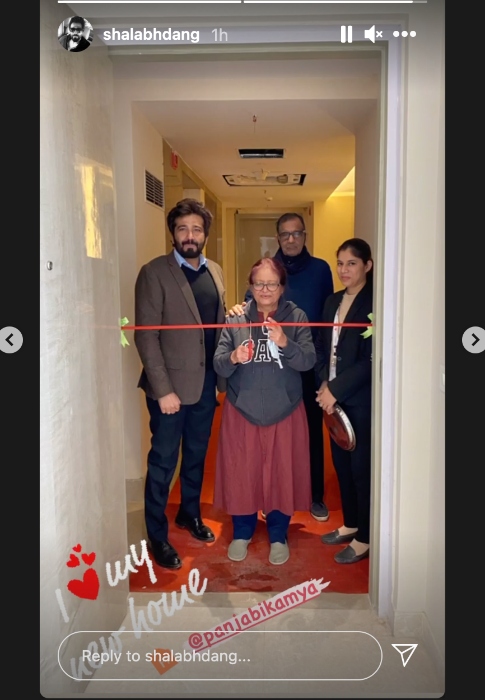