Kajol kickstarted the Durga Puja with her mommy, Tanuja Mukerji and sister, Tanisha Mukerji. Scroll down as she shares pictures from their pandaal-hoping! It is that time of the year again when the entire nation is busy celebrating the five-day-long festival of Durga Puja. The five days of the festival are known as Shashthi, Maha Saptami, Maha Ashtami, Maha Navami and Vijayadashami. Huge pandaals with idols of Durga Ma are set-up and believers come in order to say their prayers. (Recommend Read: Ibrahim Ali Khan Reveals His Equation With Father, Saif Ali Khan, Considers Him As His Mentor)

Even B-town celebrities aren't far behind when it comes to the religious matters, and Bollywood actress, Kajol is a perfect example of it. We remember how once in an interview, the actress had talked about her childhood memories of Durga Puja. 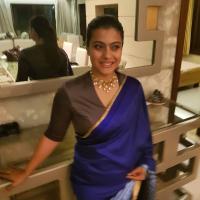 On October 4, 2019, Kajol took to her Instagram handle and shared beautiful pictures with her mommy, Tanuja and sister, Tanisha from a pandaal. Along with it, she wrote, "First day of the pujas, shoshti. Before we share it with everybody else." Take a look at it below: 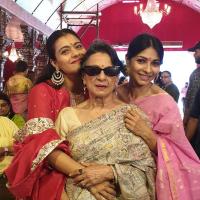 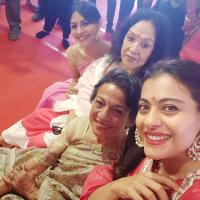 Coming back to Kajol's childhood Durga Puja memories, the actress had shared how she loved the entire family coming together to celebrate the big festival. She had said, "When I was very young, I remember my whole family coming and sitting on the floor on those long mats, which we as children had to unroll. Then all the children would put the paatas on the floor. It used to be a huge family affair (at the Mukherjee puja in Mumbai that’s still celebrated every year), right from my uncles to my aunts to my cousins. There were the same faces that you kept seeing and we would recognise them and go, ‘Kemon achho? Bhalo?’ I remember being given this big bowl of bhaja and we were only allowed to serve the bhaja because we were not old enough to serve anything else. Of course, we would be eating and serving, eating and serving! (Laughs) We were allowed to run around the kitchen and we would stay there from 7 am till 11.30 pm." (Also Read: Kapil Sharma's Mom Reveals Whom Will He Choose First Between His Mother And His Wife, Ginni Chatrath)

She had further added, "That was the feel of Puja for me and that was my time with my dad. From the time I could walk I have been at that puja. I love the Pujas! Of course, now it’s become much bigger and you have to dress up in the most uncomfortable clothes. But then, Puja was just about us. Most of the people who came for the puja were all Bengali and now the whole world lands up for it. Back then, everybody would speak, look, feel Bengali in every which way." Talking about her relationship with her mother, Tanuja, Kajol had stated, "I think she is one of the bravest women, an amazing woman, very far ahead of her time. Even today, she’s much braver than I ever could be. I try. I succeed probably 60-70 per cent of the time. I am thankful for the things that she has taught me, and I will be for the rest of my life. The kind of things that she taught me when I was a kid were the things that I implemented as an adult, and that has stayed in my subconscious. As a kid, when I would get angry, she used to ask me, ‘Will you let anger win?’ I thought that was the most frustrating line from a parent. I was rarely right in most situations (laughs), but the few times that I was right, I felt at least somebody should be on my side. But when you grow up and in certain situations in life, you suddenly realise that you let this other person win. It suddenly hits you. So, there are so many things I am constantly grateful to her for." (Don't Miss: Paras Chhabra, Mahira Sharma And Shehnaaz Gill: New Love Triangle in Bigg Boss 13?)

Well, we cannot wait to see more pictures from Kajol's Durga Puja celebrations! What about you?