Ajay Devgn Shares Wife Kajol's WhatsApp Number On Twitter As Prank, Her Reaction Is Every Wife Ever

Ajay Devgn Shares Wife Kajol's WhatsApp Number On Twitter As Prank, Her Reaction Is Every Wife Ever Like they say some people age like fine wine, and when we talk about this celebrity couple, they are sheer examples! From a whole new transformation in the way they look, working on stupendous movies and expressing their love for each other openly, Ajay Devgn and Kajol are truly one whole package of relationship goals in themselves! (Do Read: Kajol Is Embarrassed And Apologises To The Media After Son Yug Devgn Teases Them At The Airport)

Also, tell us something truly. Wouldn’t you, for a moment, feel that you live in a utopian world, if you get the contact number of a celebrity whom you have always wanted to meet? This must have exactly been the case at 4.41am, yesterday (September 24, 2018), with all Kajol fans. Fans woke up to wondering if this has actually happened! A tweet from Ajay Devgn’s Twitter had wifey, Kajol’s WhatsApp number in it. The tweet could be read as, “Kajol not in country.. co-ordinate with her on WhatsApp 9820123300.” Checkout a screenshot of the same here:

Needless to say, fans must have gone crazy behind the same and tried to add Kajol on their WhatsApp, but little did they know that they were falling for a fun trap being pulled by Ajay. Hours later after posting the tweet, came a funny reply from Ajay which said, “Warning: This stunt was performed by a highly trained professional. Do not try this at home”, and a couple of replies to Twitteratis here and there.

And then came the heartbreaking tweet from Ajay which might have broken many people’s heart. Posting another tweet, confirming that the aforementioned message and number was just a prank pulled by Ajay, the Drishyam star wrote, “Pranks on film set are so passé… so tried pulling one on you guys here.. @KajolAtUN.” Even after netizens learnt of Ajay posting Kajol’s WhatsApp number was just a joke, Twitteratis kept on posting hilarious pictures on the same. Here are some of the screenshots: (Also Read: Ajay Devgn's Wife Kajol Once Wanted To Leave Home With Kids After A Rumoured Affair With His Co-Star) 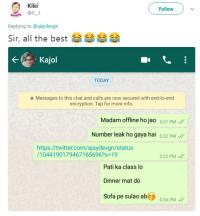 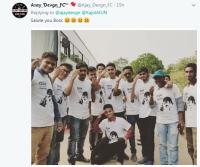 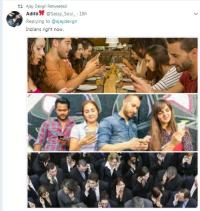 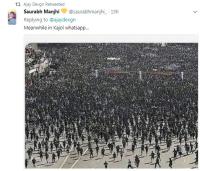 Well, well, that’s not all! Don’t you all want to know what might have been Kajol’s reaction on the same? The gorgeous Dilwale Dulhania Le Jayenge star will not let her hubby enter home! Yes, a tweet posted by Kajol a few hours back says, “Looks like your pranks are out of the studios now... But there is No Entry for them at home!” backed by an angry emoji. Here’s the screenshot: (P.S., we wonder if we get a tweet on the same as well!)

Looks like both Kajol and Ajay are witty to another level! Ajay, who is famous for pulling pranks on film sets as well, does not spare his wife! Speaking of an incident of similar fashion, Kajol is one of the few Bollywood actresses to have her own wax stature at Madame Tussauds, Singapore. Sharing a video of his wife Kajol and daughter, Nysa beside her wax statue, Ajay wittily captioned the picture as, “Meet the silent Kajol”, followed by a wink emoji. Isn’t that super-cute? (Don't Miss! Arbaaz Khan And Giorgia Andriani Are All Set For Court Marriage Next Year, Families Give Nod)

Kajol is famous for her chirpy attitude and boisterous laugh. In an interview with Pinkvilla, Kajol shared the reason behind her successful marriage. It is a cue which many men should learn from, which is, one should listen while the other speaks (the former is generally indicated for the men outta here!) Sharing the same, Kajol shared, “I think our relationship has worked only because I speak a lot and he quietly listens. So the secret to our happy married life is that Ajay doesn't say much. And that we're best of friends.”

Don’t Kajol and Ajay make one ‘awww-dorable’ couple? Also, were you among the one who fell for Ajay’s prank? Let us know in the comments section below.