It was a much-delighted view for all the K3G fans when their favourite stars were spotted together offering 'aarti' and celebrating Durga Pooja on Maha Ashtami. It is that time of the year when we get ourselves all decked up for the much-awaited festivals. The entire nation gets into their festive mood and swing in the festivals with a bang. One such festival is the five days long Durga Puja. The puja begins on Shashthi then proceeds to Maha Saptami, Maha Ashtami, Maha Navami and ends on Vijayadashami. Preparations of Durga Puja starts a month before the festival. From buying new clothes to deciding what to wear on each day, everything just lights up our spirit for the festival. (Also Read: Remo D'Souza Renews His Wedding Vows For The Third Time With Wife, Lizelle On Their 20th Anniversary)

Talking about celebrating festivals, our B-town celebrities are not far behind. Durga Puja is one such festival where we see our bong bombshells making rounds of different pandals. It is that time of the year when paps get themselves ready for a delighted view of their favourite celebrities indulged in their festive moods. This year also we witnessed a number of B-town celebrities in their best festive attires welcoming Maa Durga. This year we spotted Amitabh Bachchan with wife Jaya Bachchan. Kajol too was seen with cousins and son, Yug.

The Eighth day, Ashtami, of Durga Puja is considered as one of the most important days of the nine-day festival. It was a much-delighted view in North Bombay’s Sarbojanin Durga Puja pandal where a reunion of K3G took place. Bollywood actors Amitabh Bachchan, Jaya Bachchan, Kajol Devgan and Rani Mukherjee, who were present at the pandal relived their K3G moment. They offered prayers to Maa Durga and attended the aarti as well. Director Ayan Mukherjee was also present there to celebrate the day with his cousins Kajol, Tanisha and Rani. 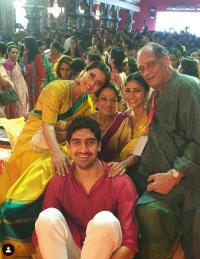 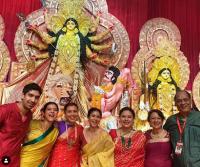 For K3G fans, it was a sight to live for when they saw their favourite stars celebrating the festival together. It was the presence of Bollywood’s superstar and recipient of Dada Saheb Phalke Award, Amitabh Bachchan along with wife Jaya Bachchan, which made the venue truly graceful. Pictures of Amit ji offering prayers to goddess Durga went viral on the internet and his fans were seen posting lovely comments on social media praising his devotion. (Also Read: Paras Chhabra's Girlfriend, Akanksha Puri Says She Is Loving His Sanskari Playboy Image In Bigg Boss)

Kajol has always been quite excited for Durga Puja. The Helicopter Eela actress makes sure to celebrate her favourite festival with her family. On October 4, 2019, Kajol had taken to her Instagram handle and shared beautiful pictures with her mommy, Tanuja and sister, Tanisha from a Durga Puja pandal. With the picture, she had written, "First day of the pujas, shoshti. Before we share it with everybody else.” 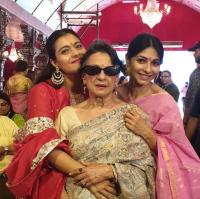 Kajol had also talked about celebrating Durga Pooja during her childhood. She had revealed how she loved when her entire family gather together to celebrate the festival. Talking about the same, she had said, "When I was very young, I remember my whole family coming and sitting on the floor on those long mats, which we as children had to unroll. Then all the children would put the paatas on the floor. It used to be a huge family affair (at the Mukherjee puja in Mumbai that’s still celebrated every year), right from my uncles to my aunts to my cousins. There were the same faces that you kept seeing and we would recognise them and go, ‘Kemon achho? Bhalo?’ I remember being given this big bowl of bhaja and we were only allowed to serve the bhaja because we were not old enough to serve anything else. Of course, we would be eating and serving, eating and serving! (Laughs) We were allowed to run around the kitchen and we would stay there from 7 am till 11.30 pm." 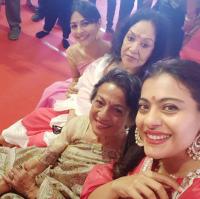 Being a true bong, she had further added, "That was the feel of Puja for me and that was my time with my dad. From the time I could walk I have been at that puja. I love the Pujas! Of course, now it’s become much bigger and you have to dress up in the most uncomfortable clothes. But then, Puja was just about us. Most of the people who came for the puja were all Bengali and now the whole world lands up for it. Back then, everybody would speak, look, feel Bengali in every which way." (Also Read: Arti Singh's Ex BF Ayaz Khan Refuted Rumours Of Being Married, Sis-In-Law Kashmera Shah Defends Her)

Meanwhile, the entire nation is celebrating Durga Puja, we could not take our eyes off from the beautiful pictures.