It won’t be wrong to say that love knows no boundaries. You will find love when you won’t be expecting it. We have seen people fall in love from different wakes of life and marrying the love of their life. It is too common now for actors to meet a sportsperson, fall in love and marry to live their happily ever after. We have seen Anushka Sharma and Virat Kohli, Sagarika Ghatge and Zaheer Khan, Geeta Basra and Harbhajan Singh and many others tie the knot. Now adding to the list is Indian Badminton player, Jwala Gutta. (Also Read: Swara Bhaskar Talks About Her Break-Up With Ex-Beau, Himanshu Sharma After Dating Him For 5 Years)

While we all know about Jwala Gutta’s professional achievements, people don’t know much about her personal life. For a while, there had been rumours doing rounds regarding the closeness of Jwala Gutta to South actor, Vishnu Vishal. Previously, on Valentine's day, the badminton player had shared a picture along with Vishnu Vishal which left their fans delighted. Take a look.

In an interview with ABN Andhrajyothi, Jwala reveals that she is indeed in a relationship with South actor, Vishnu Vishal. She further added that the couple has nothing to hide about their relationship. Jwala Gutta’s social media handle is proof of her closeness with the FIR actor. Going further in the interview, the star badminton player also talked about her marriage plans and revealed that marriage is on the cards and once all the arrangements are in place, the couple will make an official announcement.

The couple is often found expressing their love for each other on their respective social media handles. Recently, Jwala Gutta had shared a picture of her cuddling with Vishnu Vishal and had revealed how quarantine had created distance between these lovebirds. Jwala took to her Twitter handle and posted photos, captioning them as "missing my boo." The actor has replied to his ladylove saying, "Its oki..Right now social distancing is important..Folded handspray for all..." setting a right example of social distancing. Take a look.

Talking about couples past relationship, both Jwala and Vishnu had been in a failed marriage. While Vishnu Vishal was previously married to Rajini, and they have a son named Aryan, Jwala fell in love with a fellow badminton player, Chetan Anand, and tied the knot in 2005, though things did not work out, and the two got divorced in 2011. (Recommended Read: Ajay Devgn Bashes Rumours Of Daughter, Nyasa Being Tested Positive With Coronavirus)

Previously, in an interview with the Hindustan Times, Jwala had talked about her broken marriage. When she was asked if things had changed for her after marriage with Chetan, Jwala had replied, “Certainly. Once I got married, people forgot that I’m a player too! His game, his kit, his practice. I had to remind people that I’m still a sportsperson. I got lost in that. I was performing nationally, but internationally I couldn’t do much. In fact, I can’t think of many married women in sports.”

The South actor too was asked about his broken marriage in an interview with The Hindu. Vishnu had revealed that he found it hard to digest, and talking about the uncertainties of life he had said, "One thing I have realised is that there are no certainties. Anything can happen anytime. The one thing I thought was pucca was my marriage. That is not there anymore." (You May Also Read: Sunny Leone And Daniel Weber Dance For Nisha, Asher And Noah Kaur Weber As Little Ones Clap For Them)

We wish Jwala Gutta and Vishnu Vishal all the happiness! 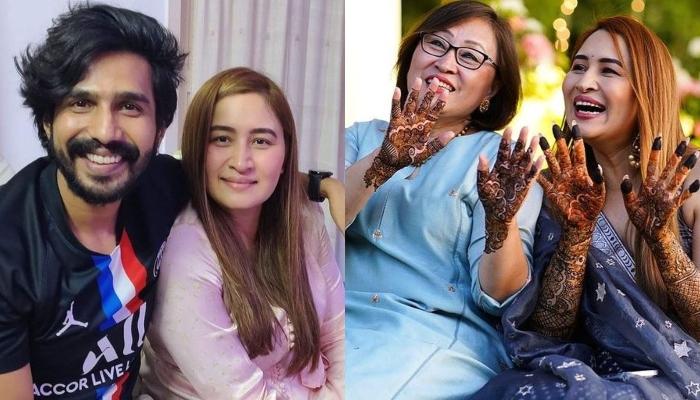 It’s that time of the year again, our favourite wedding season is here and no, we are not complaining! Though weddings happen all year around, December is a crucial time when most marriages are planned. The festivities and celebrations are on a low scale this year, owing to the pandemic,