Jasleen Matharu went to Bhopal to meet her beau, Dr Abhinit Gupta for the first time. Scroll down to know what she has to say about her first meeting with him! 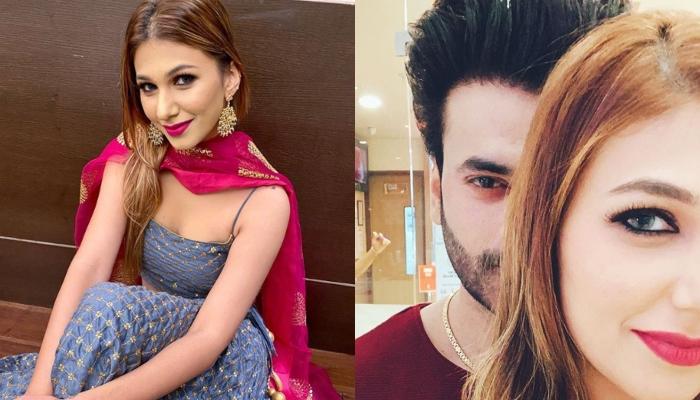 It has been some time when Jansleen Matharu had confessed being madly in love with a Bhopal-based surgeon named, Abhinit Gupta in an interview with SpotboyE. She had also revealed that she had met Abhinit through Anup Jalota and he is a cosmetic surgeon and has clinics in Indore and Pune. For those who don't know, Jasleen and Abhinit had never met, they had talked over phone calls only until recently when Jasleen went to Bhopal to spend some time with her bae and met him for the first time. Scroll down to know what she has to say about her first meeting with him! (Recommended Read: Yami Gautam Shares Pictures Of Her Dad's Birthday Celebrations, Vicky Kaushal Drops A Funny Comment)

In an interview with The Times of India, she had revealed that Anup ji had helped her find a man, and had introduced them virtually. She had said, "Anup ji had told me about this doctor, who separated from his wife last year. But, the matter couldn't progress owing to the lockdown. However, rather than delaying it further, he introduced us virtually. We talk a lot and get along well."

As per reports flashed in ETimes TV, Jasleen Matharu was in Bhopal for 15 days to meet her beau, Dr Abhinit Gupta and has returned to Mumbai now. ETimes TV said that the couple was spotted at Bhopal airport hugging very tightly when Jasleen had landed. FYI, if you don't know, this was the first time that they had ever met! Jasleen, while talking to ETimes TV, said that they had run into each other's arms when their eyes had first met. She was elated while talking to ETimes TV and said, "It was a lovely trip. I had to shoot a music video. I also had an appearance for a lounge."

On the question of how Dr Abhinit will fight a messy divorce with his first wife, Jasleen replied quite confidently, "Look, Abhinit has been crystal clear with me. I know everything about that matter. There are no apprehensions from my side. But we are definitely not getting married soon." For the uninitiated, Dr Abhinit had gotten married last year, but the marriage had lasted for just 1-2 weeks. On being asked her take on his beau's divorce, Jasleen asserted, "One, Abhinit's divorce has to come through. Two, I need to concentrate on my career as far as my immediate future is concerned." According to Jasleen, her Bhopal trip in question was not just a professional one but was also meant to know Dr. Abhinit and his family closely. (Also Read: Shruti Seth Wishes Daughter, Alina On Her 6th Birthday, Reveals How Lucky She Feels To Be Her Mother)

When asked how if there could be a difference when you meet a person online and then when you meet them in real, Jasleen happily said, "That did not happen. Main unki jo image banayi thi, woh waise hi nikle." She also revealed that Dr Abhinit also appeared in the music video. Talking about her career front, she said, "I am looking forward to doing TV shows- be it reality shows like Khatron Ke Khiladi or Nach Baliye or be it fiction. I am also open to movies and web shows." Meanwhile, Jasleen's movie Vo Meri Student Hai starring Anup Jalota and her has got stuck due to the Covid-19 pandemic and has about 5-days work left. When Jasleen was asked if she stayed with her beau, Dr Abhinit, during her brief stay in Bhopal, she denied and said, "My brother too had accompanied me. But yes, we went out as much little as we could due to lockdown. Aur haan, we shot the music video at Dr. Abhinit's farmhouse." (Don't Miss: Dipika Kakar Cooks Delicious Diet Meal For Her Hubby, Shoaib Ibrahim, He Has A 'Kamaal' Reaction)

Are you also waiting eagerly for Jasleen Matharu's wedding bells?