Siblings can love and hate each other within seconds, but they cannot stay apart, and Janhvi Kapoor shares an exactly similar relationship with her sister, Khushi Kapoor. Check it out!

Only siblings can make each other's life extra spicy or extra nice. They can be our superheroes to villains of our story, despite it, we cannot even think of living without them. Together we had walked the lanes of our childhood and handled each other on worse days. Only siblings have the capacity to love each other after a big fight. And late Bollywood actress, Sridevi's daughters, Janhvi Kapoor and Khushi Kapoor share an exactly similar relationship with each other. There is no doubt that Janhvi and Khushi are following their late mother, Sridevi's footsteps. (Recommend Read: Anita Hassandani Gives Hilarious Lesson To Hubby, Rohit On What It Takes To Go From 'Wife' To 'Mom')

We all know that Janhvi has already made a name for herself in the film industry while Khushi is yet to decide her path. The adorable sister duo never fails to give us sisters goals. And whenever we see their social media banter, we remember our very own sisters. Recently, Janvhi shared a mesmerising video of her dance rehearsal, but it was her sister's reaction that was hilarious.

On December 6, 2020, Janhvi took to her Instagram handle and shared a beautiful video of her classical dance moves. In the video, we can see Janhvi performing on a song, Kanha from Ayushmann Khurrana and Bhumi Pednekar starter, Shubh Mangal Saavdhan. The video also features her little sister, Khushi Kapoor, but she isn't dancing. We can see her chilling on the couch and not paying any attention to her Janhvi's classical dance. Janhvi captioned the video as "Hope you guys are more amused than my sister was. Swipe to see me make a booboo." Check it out below:

Earlier, in an interview with the Filmfare, Janhvi had gotten candid about the bond she shares with her baby sister. The actress had revealed that she might be the older one, but it is her younger sister that acts like an elder sister and protects her. The actress had stated, "I am like the imbecile, immature, childish younger sister and she is the protective, sensible, independent elder sister. She takes me seriously with my work, which is the only time she takes me seriously. That is a big moment in our relationship." Not just this, Janvhi had also revealed that her sister during the lockdown, her sister used to wake up at 3 and had shot TikTok videos. (Also Read: Inaaya Naumi Kemmu Decorates Her Christmas Tree With Daddy, Kunal Kemmu, Draws An Elf Portrait)

Earlier, Janhvi Kapoor had given us a sneak-peak of how her sister, Khushi makes sure she doesn't go out or leave her sight while they are together at home. Janhvi had taken to her Instagram handle and had shared a hilarious video on her Instagram stories, wherein, we could see Khushi holding her sister's hand in her mouth so that she doesn't leave her. (Don't Miss: Kashmera Shah Opens Up On How 14 Times IVF Treatment For A Baby Took A Toll On Her Body) 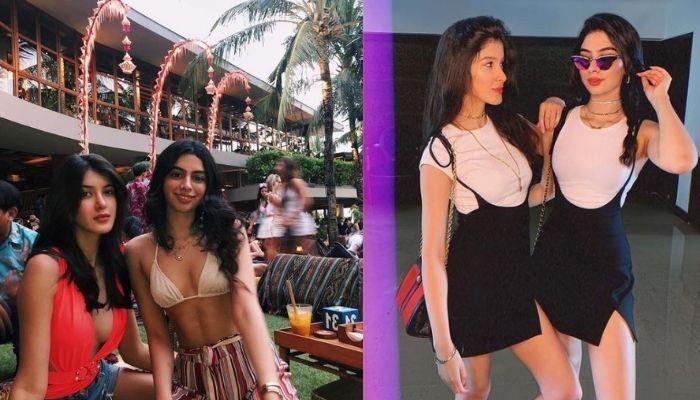 The most fun and caring relationship is the one you share with your cousins. Lucky are the ones who have cousins of their age with whom they can do all kinds of fun and mischiefs. Your cousins are your secret holders, your travel partners, the ones who save you from