If you have a sister, then you don’t need a best friend as they are the best part of your childhood. They will do all sorts of emotional attyachar to you but are the only ones, who always believed in you when nobody else did. From understanding your unsaid emotions to being always there for you whenever you need them, they are your pillar of strength. The bond shared by sisters cannot be put in words but can only be felt. One such rock-solid bond is shared between Janhvi Kapoor and Khushi Kapoor. (Also Read: Quarantine Update: Divyanka Tripathi And Vivek Dahiya Explore Never Seen Before Sides Of Each Other)

Janhvi Kapoor and Khushi Kapoor share a very warm bond with each other and always have each other’s back. The sudden death of their mother, Sridevi, had shattered the entire Kapoor khandaan. Janhvi and Khushi had shown immense courage and stood strong for each other during the difficult phase. Since now, Khushi had moved to New York for her studies, Janhvi makes sure to take out time from her professional commitments and spend it with her sister. 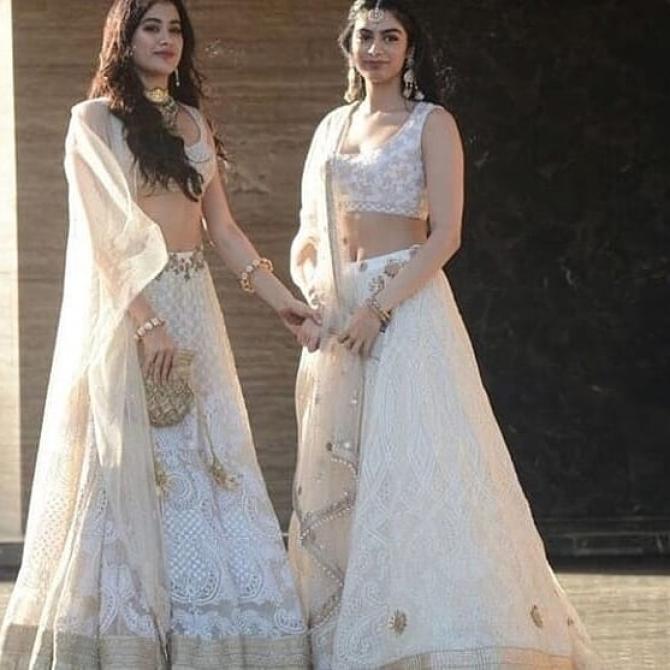 Since the entire country is shut down due to the pandemic COVID-19 and everyone is locked up inside their homes, the Kapoor sisters are making sure to spend quality time with each other. Due to the widespread of the virus, Khushi, who is studying at the New York Film Academy has come back home since the shutdown of all academic institutions. On April 1, 2020, Janhvi took to her Instagram stories and shared an adorable picture with Khushi. In the picture, Janhvi was seen sitting in Khushi’s lap and giving a tight hug to her. Along with the picture, Janhvi wrote, “She loves having me around." The picture spoke volumes about their sibling bond. 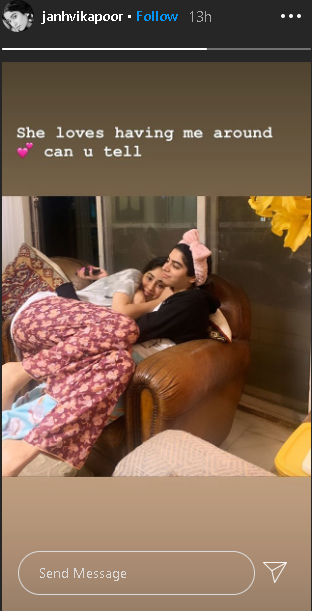 Even with her busy schedule, Janhvi always makes sure to pay a visit to her sister, Khushi. On February 2, 2020, Janhvi Kapoor had taken to her Instagram stories and had shared a picture with her sister, Khushi Kapoor. In the picture, Janhvi was seen clinging to her sister, Khushi sending out major sister goals. Janhvi had sported a beige-coloured, top and track pants whereas, Khushi had opted for a black jacket with hood and matching track pants. Janhvi had written, ‘Peanut and Black Bean’ atop the picture. (Also Read: Nehha Pendse Has A Perfect Reply For Trollers Who Slammed Her Post-Wedding With Shardul Singh Bayas) 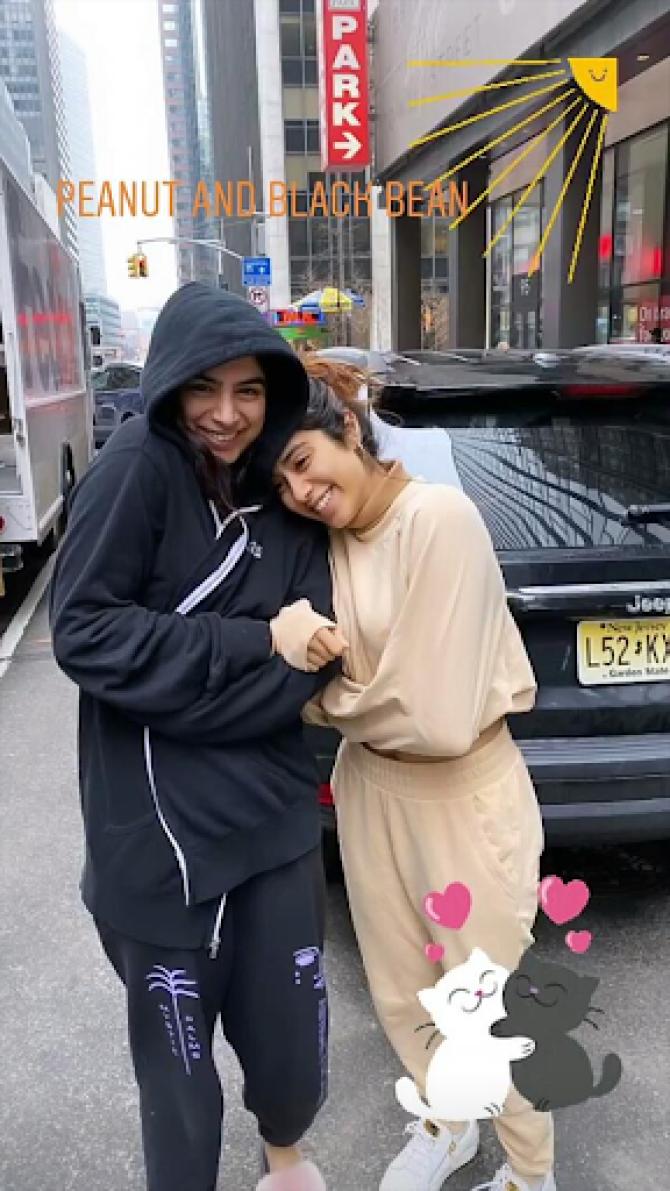 In September 2019, Janhvi Kapoor was missing her sister, Khushi Kapoor and for that, she had flown to New York to spend some quality time with her. On September 23, 2019, Janhvi had taken to her official Instagram handle and had shared two cutesy pictures, one with her dear dad and the other, with her darling sister. In the picture with her dad, she could be seen leaning on Boney’s shoulder. The other picture had her and Khushi, happily clicking a selfie. Janhvi had captioned the post as “Finally”, followed by a rainbow emoji. As soon as she had posted these pictures, her half-sister, Anshula Kapoor had sent lots of love. 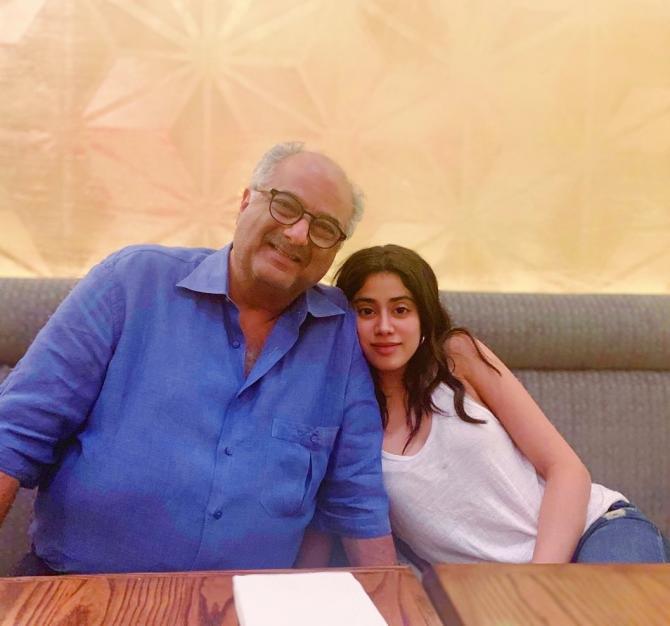 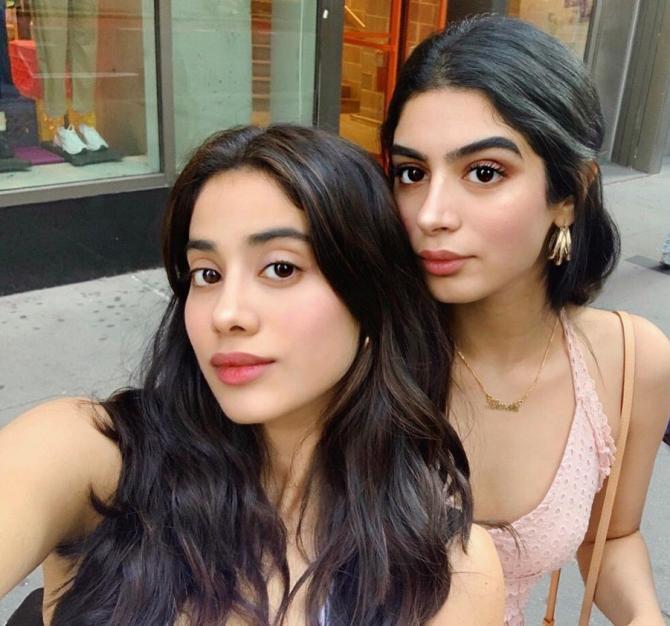 On Anaita Shroff Adajania’s chat show, Feet Up with the Stars, Janhvi Kapoor had talked at length about her bond with her sister, Khushi Kapoor. She had said, “We share our clothes, but we have this thing that if you steal without telling, then it’s a thing. At this point, I don’t care. She still likes... She’s very righteous, so she is like, ‘You cannot take something without asking.’ She feels like she needs to inculcate manners in me. So that’s where it’s coming from.” (Also Read: Erica Fernandes Gives Funny Name To Kasautii Zindagii Kay Co-star And Ex-Boyfriend, Parth Samthaan) Aren’t the two adorable? What do you think? Let us know. Ever since filmmaker, Boney Kapoor had opened an Instagram account, he has left Gen Z behind in the race. The producer has become a pro at handling social media and has been sharing some unseen pictures with his friends and family members. With his IG posts, Boney takes us back to the good old