In an interview, Janhvi Kapoor opened up about the most memorable Rakshabandhan for her and further shared the best part of the celebration. Read on to know more!

Bollywood filmmaker-producer, Boney Kapoor is living a happy life with his kids, Arjun Kapoor, Anshula Kapoor, Janhvi Kapoor and Khushi Kapoor. For the unversed, Arjun and Anshula are Boney's kids with his first wife, Mona Shourie. Later, he parted ways with her and got married to Sridevi. The couple was then blessed with two daughters, Janhvi and Khushi. However, Mona died of cancer in 2012 and just a few years after that, in 2018, Sridevi breathed her last in a mysterious death from drowning in Dubai. Since then, Arjun and Anshula stood like a pillar of strength for their father and half-sisters.

The celeb kids share an unbreakable bond, and glimpses of the same are found on their respective social media handles. However, since Boney Kapoor's debut on social media, we are also blessed to witness some unseen moments of his family, from their throwback memories. For instance, on April 19, 2022, taking to his IG handle Boney had posted an unseen childhood picture of Arjun Kapoor and Janhvi Kapoor. In the picture, Arjun was seen posing while holding his baby sister, Janhvi's ponytail, and it is too adorable for words. Along with the photo, Boney had written:

"Arjun & Janhvi in a playful mood in Burlington (Vermont, USA) during the shooting of Our film KHUSHI." In an interview with ETimes, Janhvi Kapoor was asked about the most memorable Rakshabandhan celebration for her. To this, she shared that it was the day when she tied a rakhi to Arjun for the first time. She also opened up about the sense of security and warmth that she gets from her sister, Khushi Kapoor and their half-siblings, Arjun Kapoor and Anshula Kapoor, which has made her stronger as a person. Talking about the same, she said:

“The first time when I tied Arjun bhaiyya a rakhi was definitely the most memorable Rakshabandhan for me. It wasn’t too long ago, but it was special. I think with every passing year, I’ve felt stronger and more secure because of the love and the strength of my siblings, and more so in the past couple of years. Khushi and I have always been extremely protective of each other, but now, there are two more siblings in the equation — Arjun bhaiyya and Anshula didi. Right off the bat, there was a sense of ‘we are there for each other’, ‘we have each other’s backs’, and that we want to be a family in whatever sense of the word we can make that happen. It means the most to us that we get to be there for each other. I sleep better knowing that I have two such solid people looking out for me. I hope they feel the same for me because I know that I’d do anything for them.” 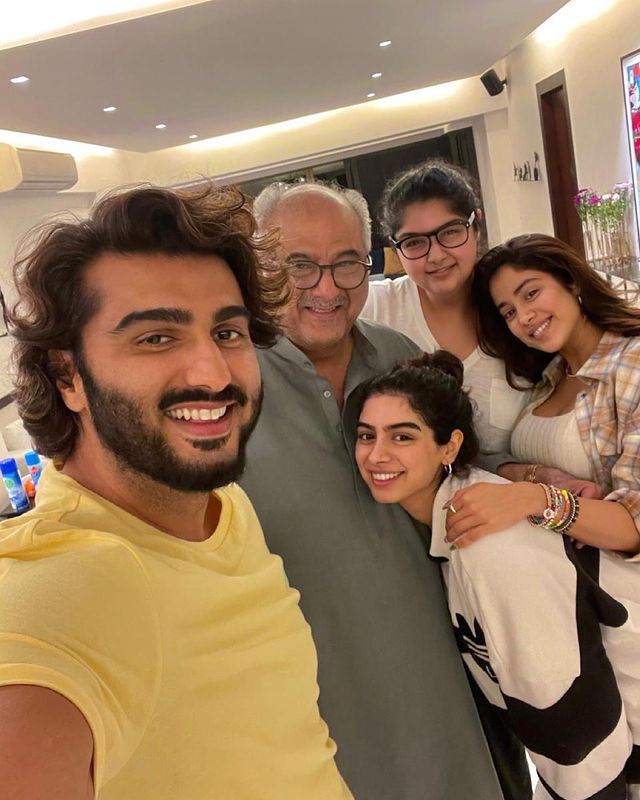 Further, in the same conversation, Janvhi was asked about the kind of relationship he shares with his siblings. To this, she explained that whatever she got in Arjun makes her feel special and said:

“There is no such thing as an ideal relationship. If there is a sense of trust, security, and understanding, these things can mean different things to different people, and that relationship is as close to being an ideal one. I have all of these in a modern, new and alternate capacity with Arjun bhaiyya. I look up to him for the man he is. What I share with him is a special relationship. I am just lucky to have him in my life.” In the same interview, Janhvi revealed how the Kapoors celebrate Rakshabandhan and what the festival means to her. Elaborating this, she mentioned that the whole family gathers for lunch at either her chachu, Sanjay Kapoor or Anil Kapoor or at her grandma, Nirmal Kapoor's house. The concept of coming together after making time out from their busy schedules is the best part of the celebration for her. She concluded:

“Rakshabandhan, for me, always symbolised a day when the whole family gets together, no matter how busy we are. We cousins get together and have a nice meal. There’s a warm, fuzzy feeling of seeing family around, feeling a renewed sense of security and catching up with each other, which we don’t have the luxury of always. We always have lunch at either Sanjay chachu, Anil chachu or daadi’s house. It will be the same this year, too. It will be a huge feast with the family. The celebration is quite simple and basic, but it’s just a lot of fun to get together. Hopefully, it will all be the same this year, too.” Also Read: Ridhi Dogra Hits Back At Trolls Who Criticised Her After Raqesh Bapat-Shamita Shetty's Breakup