Ever since Janhvi Kapoor had made debut with 'Dhadak', she is often compared to her late mother, Sridevi. Janhvi reacts to the same and reveals if she feels the pressure to match up to her stature.

In 2019, Shah Rukh Khan had revealed the ‘practical and honest’ reason by his son, Aryan Khan for why he doesn’t want to be an actor. Aryan thinks that every time he will be compared to him and if he does well, the audience will not credit his talent and skill but will say it’s because his father is an actor and it’s in his genes. And if he doesn’t do well, they will be like, 'my God look at him, what his father did and what is he doing?' Looks like Aryan’s practical reason for not pursuing acting as a career is quite relatable to every star kid as not just once but throughout their career, they are compared to their star parents. Sridevi and Boney Kapoor’s daughter, Janhvi Kapoor too, has been facing the same situation in her one-and-a-half-year-old career. (Also Read: Sara Ali Khan Writes 'Miss You' Birthday Wish For Brother Ibrahim Ali Khan With Unseen Maldives Pics)

Even before Janhvi Kapoor had become the Dhadak of the nation with her debut film, she has been in the limelight, courtesy her star parents, Sridevi and Boney Kapoor. Every look of Janhvi is compared to her late mother, Sridevi. It was on February 24, 2018, when Sridevi’s untimely demise had shocked the entire nation and since then, every Sridevi fan looks for her reflection in her daughter, Janhvi. The fans believe that with acting talent, Janhvi has inherited impressive fashion sense from Sridevi and she has been charming her way into the hearts of the audience with her passion and love for her work. In an interview with the Hindustan Times, Janhvi Kapoor comments on the constant comparison with her late mother, Sridevi. When asked if she feels the pressure to match up to her mother’s stature, Janhvi stated, “I think people need to accept that I’m a different person from my mother. There’s a section of society which has been able to do that with Dhadak, but there are people who couldn’t make that differentiation and they still look for Sridevi in me. Maybe after more of my work comes out, they’ll understand I’m a different type of actor and I’ll make different choices.” When asked, “If given a chance, would you want to recreate her magic onscreen in the remake of any of her films?” Janhvi Kapoor retorted, “I don’t think that anyone can recreate that magic. No one can. Also, when something has been done so well, I don’t know if it’s right to try to attempt to do it again.” Speaking about the nepotism debate being at peak during her debut in Bollywood, Janhvi said, “Hopefully, my work will do that. I know for some, Dhadak wasn’t reason enough to end the debate. I don’t deny nepotism does exist. It’s a reality in our industry, and every other profession. The doctor that I visit, his son is also a doctor but no one is holding a morcha outside their clinic that ‘Nahin yeh toh nepotism hai, main nahin aane wala yahan ilaaj ke liye’. I understand there’s a sense of alienation and a bit of judgment.” 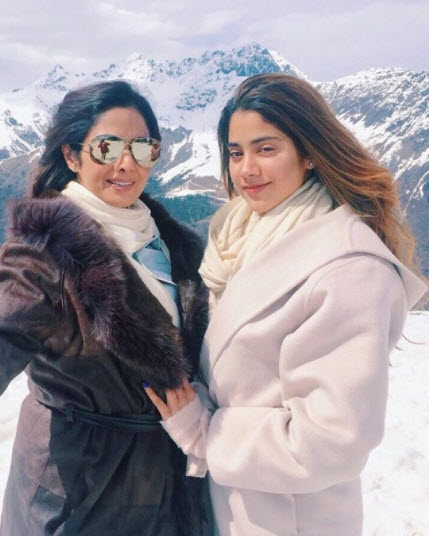 Revealing if being a star kid has helped her in the industry, Janhvi Kapoor remarked, “There are things that people — who don’t come from this background — would have gone through to get work and recognition, which I didn’t have to. Their struggle is much more relatable for the common man than mine would be. In fact, I don’t think I’ve had too much of a struggle, but now that I’ve got this opportunity, I better work my a** off to make it worthwhile for myself and for the audiences.” (Also Read: Alia Bhatt's Phone Screensaver With Her Beau, Ranbir Kapoor Is Every Millennial Couple Ever [VIDEO]) 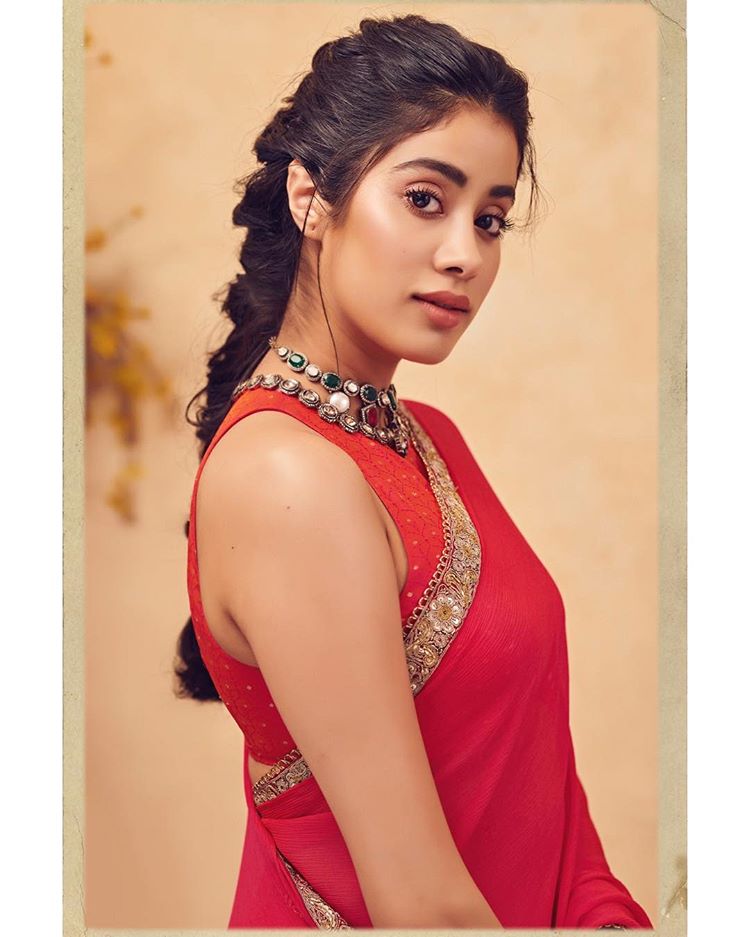 There have been innumerous instances of Janhvi Kapoor sporting a look that has reminded us of her mother, Sridevi. For instance, at the 65th National Film Awards, Janhvi had donned her mother’s beautiful saree and looked as pretty as her. Sridevi had worn a pink and white kanjeevaram saree at the actor, Ram Charan's wedding in 2013. Even though with some minor changes in the saree, Janhvi had proved that she is the reflection of her mother. While originally Sridevi had worn this saree with a sleeveless blouse and matching necklace and earrings, her daughter, Janhvi had opted for cropped sleeves blouse and kept her look simple with just a pair of jhumkas. At the annual Umang Mumbai Police Show on January 19, 2020, Janhvi Kapoor’s scarlet red saree had reminded us, yet again, of her mother, Sridevi. Wearing her favourite, Manish Malhotra, Janhvi had opted for a head-to-toe red look with intricate embroidery and sequin work on her saree. She had accentuated her look with a sleeveless blouse which had a plunging neckline and skinny beaded straps with zero jewellery, minimal beauty look and just-got-out-of-bed waves! Janhvi’s all red look had reminded us of her mother, Sridevi, who had opted for the same hue look for an award ceremony. 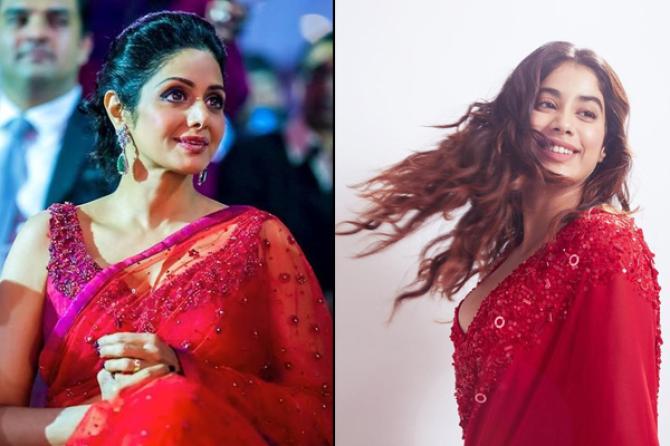 It is rightly said that daughters get it from their mothers, and it is no different with Dhadak fame starlet, Janhvi Kapoor. Janhvi has inherited the grace and talent from her mother, Sridevi and it was quite evident in a video posted by her on Instagram sometime back. Janhvi had posted a beautiful video of her performance on the iconic Bollywood song, Piya Tose Naina Laage Re and the grace with which she had performed reminded us of Sridevi. Wearing a sky-blue coloured anarkali, Janhvi loses her balance in the end but gracefully managed to impro it and joked about it in the caption, which could be read as “When u lose balance so u have to improv an over dramatic end.” (Also Read: Janhvi Kapoor Shares An Unseen Picture Of Sridevi And Boney Kapoor, Makes Us Wish She Was Here)

On the work front, Janhvi Kapoor will next be seen in Gunjan Saxena: The Kargil Girl, Roohi Afza, and Dostana 2. Imagine falling in love with someone so hard that you forget the world, and defying all the odds, take a plunge and get married to them. This was the love story of Boney Kapoor and Sridevi. Despite being married and having two kids, Boney had fallen in love with the